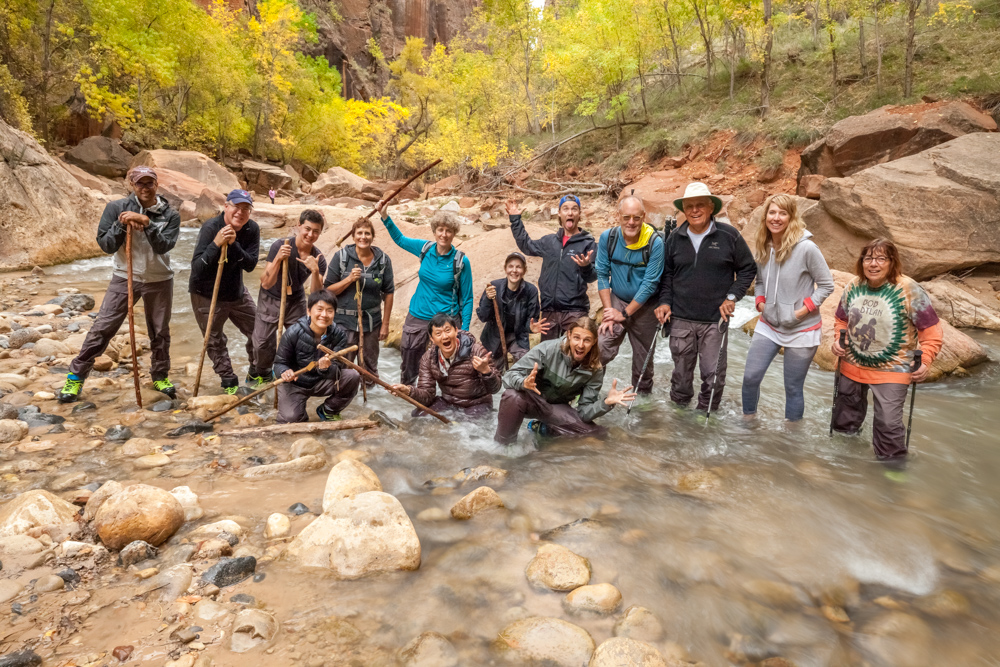 Zion is one of those places that you don't forget once you see it. There's something humbling about standing in a canyon that has been carved by time and water to a depth of two thousand feet deep. The red rock catches and reflects the most glorious light while it's contours lead the viewers eye deeper into the the soul of the landscape.

On a late October evening in Springdale Utah Phil Nicholas and I met with an enthusiastic group of twelve photographers to discuss our game plan and learn about each other. The meeting went off without a hitch and before we knew it bed time had arrived.

Our first morning was a trip to the Court of the Patriarchs for sunrise. As luck would have it there were clouds hanging in the sky ready to catch the morning light. The group set up on a nice slab of rock using the Virgin River as a foreground element and the Patriarchs as a backdrop. Beautiful rays of orange light soon struck the rocks it was go time and the group fired away at the scene. We shot the Patriarchs for about an hour and once everyone was satisfied we made our way up the Mount Carmel Highway for shoot number two. 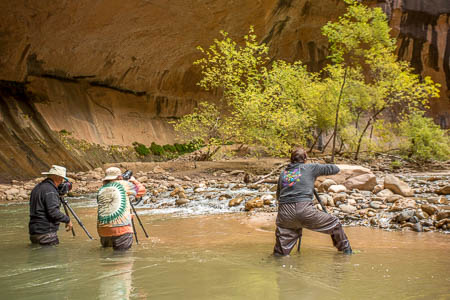 Our second stop was a very photogenic tree that winds its way out of the red sandstone. There were a few angles to shoot from so the group spread out as everyone composed their shots. After a little shooting someone noticed a group of longhorn sheep and half the group moved on to shooting the sheep which made for nice subjects against the red rock.

The next stop of morning excursion was a small ranch where a family of desert horses live. The horses were a bit camera shy at first but a few minute into shooting they started to walk around and strut their stuff. On our way back to Springdale we stopped at a buffalo ranch for a few minutes to get a few quick shots in. The group parted ways for lunch break and most likely nap break.

When the group reconvened in the afternoon Phil and I shuttled everyone to the outfitter to collect the waterproof gear that we would be needing for the following day. Once everyone had their gear we set back out to shoot sunset at at the Watchmen footbridge. By that point the clouds had built up and sunset was looking iffy. When it was all said and done sunrise ending up being the show stealer that day. After sundown the group retreated back to Springdale for dinner and some good rest before the next morning. 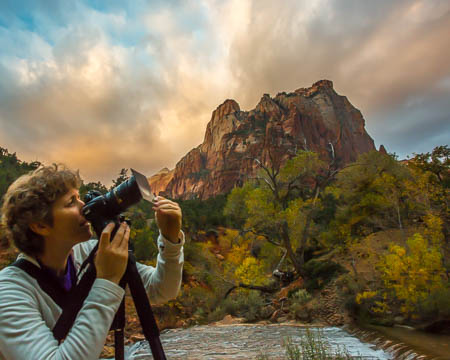 Day two is where the Zion workshop becomes extreme. The group met at 6AM in front of the hotel fully suited up in their waterproof gear that we had picked up on the previous day. We drove to the visitors center where we caught the first shuttle to The Narrows. Upon arriving at the trailhead the group hiked into up the trail until we reached The Narrows. At this point Phil took half of the group ahead while I stayed back with the other half of the group. We split the group in two in order to stay out of each others way while shooting in this workshop.

As the first group disappeared into the canyon the second group shot some nice cascades while waiting for their turn to enter the narrows. Both groups made their way up the river through sandbars and cascades taking time to shoot the landscape along the way. It can be difficult to make good ground as a photographer in The Narrows because there's something beautiful around just about every corner. Phil and I did our best to keep the groups on a schedule in order to capture decent light in the famous Wall Street section of the canyon.

We photographed Wall Street and after a good day's worth of hiking it was lunch time. My lunch was slightly deformed and a little soggy but none the less delicious! We finished our meals and began our exodus to dry land but not without making a stop or two to photograph a few more spots of course.

We snapped a group photo at the start, or in this case end of the narrows and proceeded to hike out to the bus stop. After a short bus ride that seemed like forever due to slight exhaustion we arrived back at the Aperture Mobile and drove into town to drop off our gear to the outfitter. Lastly it was time to head back to the hotel and say goodbye to another fantastic group of Aperture Academy students.

Mike, Phil, and the rest of the Aperture Academy Team!