Zion National Park provides one of the most unique experiences available in the entire Colorado Plateau. Usually with the canyonlands area of Utah, the perspective of the viewer is from the top of the canyon looking down, not too shabby, but to traverse inside the canyon is a difficult task, often taking hours or even days to reach the bottom. With Zion, your perspective is reversed, looking from the bottom up. This enables the viewer to access some amazingly remote places without little effort, although getting to the top to look down is quite a hike! Every year, Aperture Academy takes at least one group of photographers down into the canyon, some years, the trip is so popular we have to do it twice!

For fellow instructor Mike Wardynski and I, this would be our second trip to Zion in a week, and we were excited to get back to this heavenly place and share its beauty with the next group. As with every workshop, we start out with an orientation to introduce everyone to each other, and go over the planning for the next couple days adventure. As this workshop is one in our "extreme" series, there's a little more that goes into the orientation than usual, since hiking the narrows in Zion requires special gear in the fall due to the colder weather and the water temperature. Everyone in the group this time was a returning student save for one newbie, but she was just as excited to see the majesty and experience Zion as the rest of us! 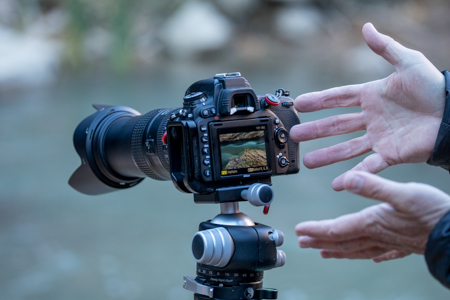 Most of the year, Zion is one of the busiest parks the NPS, its road system is grossly underrated for the amount of traffic that would strain it. So, the National Park Service has instituted a no car policy for most of the year for the main road into Zion canyon. A free shuttle service exists to relieve strain on the infrastructure and keep the park relatively noise and smog free. So with this in mind, we have to wake up a little earlier to catch the first shuttle from the visitors center for our sunrise shoot. As we made our way to the Court of Patriarchs, the towering cliffs on both sides of the canyon became more apparent in the pre-dawn light, and the groups excitement began to raise as we left the shuttle to setup for sunrise. Along the Virgin river, there lies a perfect spot to take in all three patriarchs, named for the biblical fathers of Abraham, Isaac, and Joseph. With the gentle rush of small waterfall, and morning light bouncing off the mountain tips, Mike and jumped around to make sure everyone in the group was utilizing their cameras and filters to grab the best possible shots. After a time, returned to the van via the shuttle, and headed up to the east rim of the park, to shoot from the only overlook that doesn't require a hike from the bottom of the canyon. The Canyon Overlook hike, as its known, is just a short drive from the park entrance, and a short hike out to a precipice which overlooks the southern end of Zion canyon. This hike would be a small glimpse of what our group would have to endure on our second day. We spent some time at the top viewpoint, grabbing some panoramas and playing with the shadows, before we made our way down for a midday break. 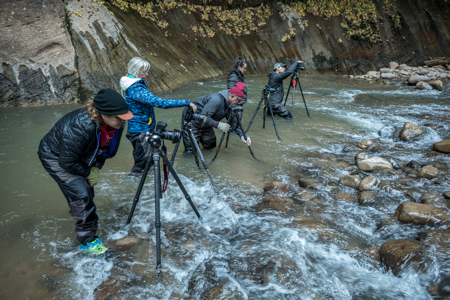 After lunch and a nap, took everyone to Zion Outfitter, where we would be renting our gear for the next days hike. Boots, waterproof pants and bags, and hiking sticks were requirements for our group to safely and comfortably navigate the canyon narrows. We would be spending all day in the water and with the water temperature at 40 degrees, one definitely needs proper equipment to stave off hypothermia. After everyone was geared up and looking silly, we swapped out our narrows attire for camera gear and proceeded to enter the park again for our sunset shoot. This afternoon we planned on shooting the Watchman, which is the first mountain in a series that overlook the entrance to Zion Canyon. The Watchman stands tall and peers over the virgin river, its gaze fixed back up the canyon. There are many spots along the river that provide an absolutely amazing view the Watchman, but on a couple bridges along the Pa'rus trail, the views are significantly better, and easy to access. With everyone setup, all that was left to do was wait for sunset! We got some glow from the fading sun, but not much else, and so we packed up and headed to town for dinner. 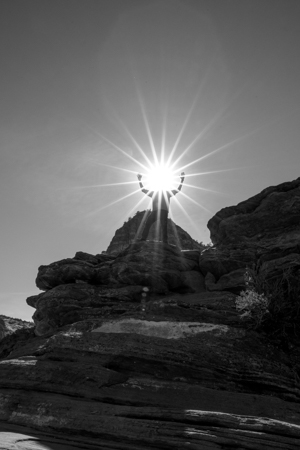 Today's the day everyone was waiting for. The Narrows. Just the name sounds cool. Again we woke up a couple hours before sunrise to catch the very first shuttle into the park. But this time, we would be taking it 45 minutes down the canyon to the end, at the Temple of Sinawava. From there we hiked a mile on the Riverside Walk, to the entrance of the narrows. From here, nearly every step we took would be in the water! After taking a quick group shot, where everyone was shocked to feel their feet get wet, we began our day of hiking and shooting up and down the canyon. Now, getting into the narrows at dawn serves two purposes; one, we would be the first ones there so the likelyhood of having people in our shots would be very low, and second, the we would get two chances at seeing the light bounce around the tall canyon walls. As we made our way up the river, we took advantage of the light glowing down the narrow walled canyon, and made stops along our hike to shoot where it looked awesome. Once afternoon set in and we reversed our course, we would get similar light and make stops on the way back out. Time has a way of disappearing down there, and we ended up staying in the narrows from 8am to about 4pm! Our group just didnt want to stop shooting! The afternoon light hitting the walls of the canyon glowed (it seemed) better than the morning, and Mike and I took full advantage of showing our group how around just about every corner, (if you time it right) you can find some amazing shots. Our groups eyes lit up after seeing the examples we were showing them with our test shots. Everyone was extremely giddy to see what they could capture. Also its nice having waterproof pants so you can literally sit in the rushing water and grab shots from absolutely wherever you want. The freedom of shooting possibilities down there is as liberating as it is overwhelming. We made it out of the canyon pretty late in the afternoon, and upon returning our gear to Zion Outfitter, everyone was clamoring for two things; PIZZA & BEER! So how could we not oblige? After giving everyone a couple minutes to freshen up at the hotel, we made our way to the Flying Monkey, and ate and drank till they kicked us out. What a great group! Thank you all for making the workshop an ease, Mike and I enjoyed your company and enjoyed sharing Zion National Park with you! We hope to see you again soon.