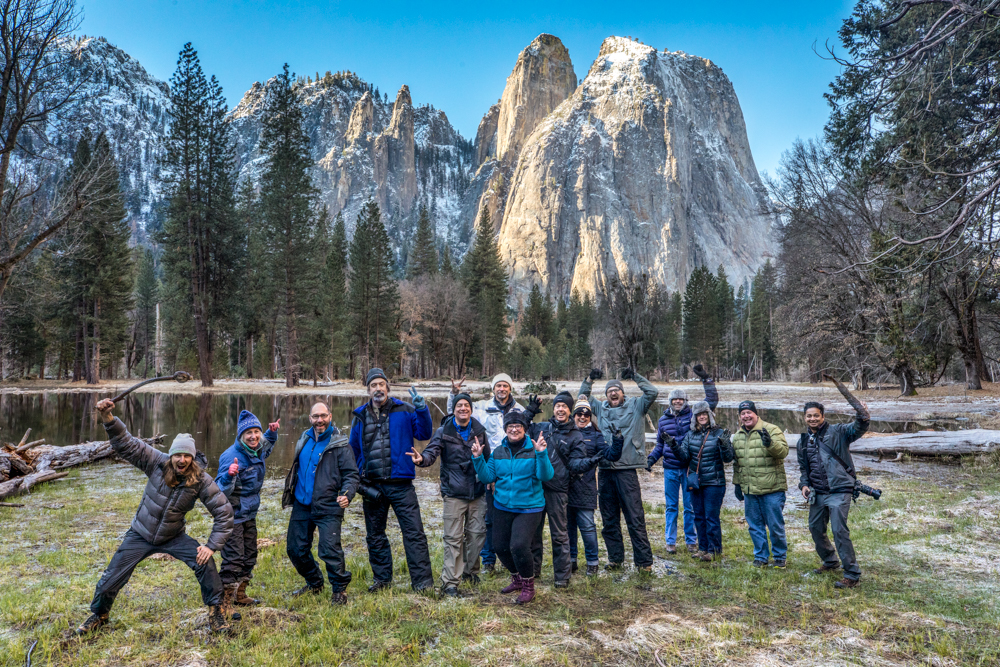 Yosemite National Park was the playground for Ansel Adams and John Muir. These two saw the park in just about every condition possible, and the park can’t even be talked about without mentioning them. They helped build the lore that has become Yosemite. With current trends like Horsetail Falls and winter returning to the park, Yosemite has grown in popularity every year. This past weekend Mike Wardynski and I met with 13 great photography enthusiasts to explore the park, and work on learning all there is to know about landscape photography.

Our group started out before dawn on Saturday morning heading to the Merced River to photography reflections of the great granite monoliths in the river. Mike and I helped the group find the best little nooks and crannies to set up a great composition and then helped those with graduated ND filters and polarizers to learn more about how to make the most of those. The newer photographers we helped with settings, reading histograms, and getting familiar with all of that. 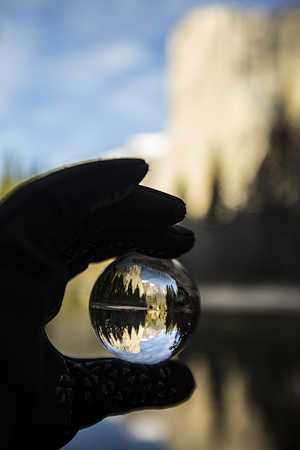 Our group made way along the river stopping at a few different vantage points throughout the morning. We photographed El Capitan from two different vantage points, shot the 3-brothers and Cathedral Rocks as well. The recent storms has created numerous eddies and pools along the bank to help provide great reflections…the cold temperatures left portions of the river frozen creating a world of texture and colors only a twist of the polarizer away.

Our last stop of the morning shoot was photographing upper Yosemite Falls from one of the many meadow vantage points…here we photographed the falls from Swinging Bridge, and also from the meadow where ample pools of water helped create reflections and leading lines to balance the compositions.

Early mornings and cold temps make for hungry photographers! It was time for a much needed nutrition break before we took a short break at the hotel so folks could charge up their cold camera batteries, and get ready for our afternoon session.

One of the main draws for Yosemite in February is the fire fall phenomenon on Horsetail Falls. This scene, where a final ray of the setting sun illuminates a delicate and seasonal waterfall causing it to glow almost lava orange is one of the coolest things you’ll ever see….with 400 of your closest friends. Popular or not, it’s something special, and if there looks to be an opportunity to get this in our cameras, we’re going to give it a shot. The forecast for the entire weekend called for snow, so the numbers were smaller and we were able to set up in prime view for our 2 hour wait until sunset.

The evening brought some weather into the valley, and the likelihood of the firefalls glowing for us looked grim…but near the perfect moment the sun broke through and gave everyone a nice little show…the light faded out behind some clouds before the true firefall happened, but the glow on the rock and falls that we did get was still quite nice. It was a pleasant way to end our first full day of shooting. 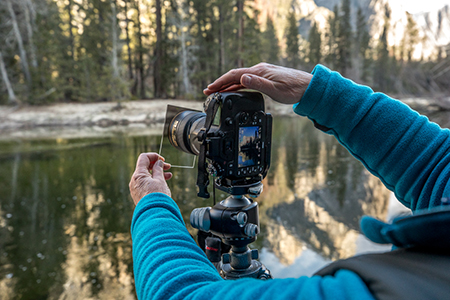 We started early again and made our way up to the iconic Tunnel View, where we could survey the whole park, and see what Mother Nature had been up to the previous night. Snow again had not arrived, and the weather forecast was a resounding 0-2. Not only was there no snow, but there wasn’t even a cloud in the sky. We quickly opted to leave Tunnel View and head into the park to shoot some reflections of the granite walls in some seasonal pools. These little pools are awesome and offered us views of Cathedral Peak and the neighboring granite in one direction, and El Capitan in the other…we were also able to shoot interesting ice patterns, and reflections of Horsetail Falls in the pools.

Our group had acquired quite a few images during the first day and morning, so we spent a couple hours during the harsh mid afternoon light going over some processing techniques and image review in Photoshop and Lightroom. Everyone really got some great images, and it was fun for Mike and me to process some of those images and show folks how great they could look when polished up.

Time flies and before we knew it, it was time to head back in the park for our last afternoon of shooting. We stopped first back at Tunnel View. Nice clouds had rolled in and we were able to get some great late afternoon light on the valley and Bridal Veil Falls. We also had the group walk down the road a little ways and work on shooting some great texture and abstraction of a wall of icicles. SO many interesting lines and shapes, it was fun to see the group really get into it. 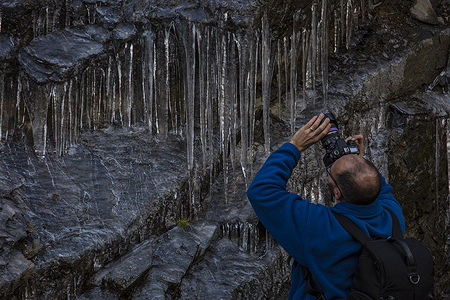 The next stop was a little curve in Bridal Veil Creek. The creek was really jamming due to the recent rain and snowmelt. This made for some fun shooting with longer exposures to really smooth out the water. The cold had created an icy mist that hung in the trees near the base of the falls, and added some extra drama to the larger scene.

By the time Mike and I led the group away from the falls the weather was again rolling in and that snow forecast began to look more like a reality. We could feel a definite change in the temperature. We hadn’t been able to really get half-dome yet on the workshop and we hoped that the evening would deliver one last sunset before whatever storm system approached overtook the park. We loaded the group up and delivered them to Cook’s Meadow…here we set up along some nice pools and helped the group find good spots with reflections of Half-Dome and also utilizing some of the interesting grass patterns that are in this field. Half Dome would not play nice…every time a gap in the clouds seemed to approach another shroud of clouds would form out of nowhere and plant itself right over the mountain…there was some nice textures and shots of upper falls, and some of the other nearby peaks…but half-dome stayed hidden until the light had faded and it was time to call it a night. That’s the way Mother Nature plays, sometimes. That’s why we go out other times as well. The more you shoot the more chance something will happen…plus if Yosemite gave up all the goods on the first time, there would be nothing to return for…and we all know Yosemite is always fun to visit more than one time!

Brian, Mike and the rest of the Aperture Academy Team!