Yosemite is beautiful no matter what time of year you visit. It can be viewed in the snow or under a fresh cloak of green leaves. One of my favorite ways to view Yosemite is under the light of the night sky. At Aperture Academy we love to get away from the crowds whenever possible and shooting late into the night is one of the best ways to do just that.

Like all of our photography workshops, the Yosemite After Dark started with a group orientation where everyone had the chance to get to know one another while learning about what we would be shooting for the next two days. After orientation we had a short break before heading into the park for sunset. For the first shoot, I took the group to one of my favorite classic view points of Halfdome and Yosemite Valley. We photographed sunset and waited for the last light of day to disappear into the night. Once the sun had completely set we shot some pinpoint stars and then proceeded to shoot a series of star-trails for about an hour. Once we wrapped up our star-trails we headed down into Yosemite Valley to capture the elusive moonbow on Yosemite Falls. Since there was not a lot of water this year the moonbow was a little smaller than normal but it was still a moonbow nonetheless. Our last shot of the evening took us up to an iconic view of Yosemite Valley where we shot a few more pinpoint stars before heading back down to our hotel for some much deserved rest. 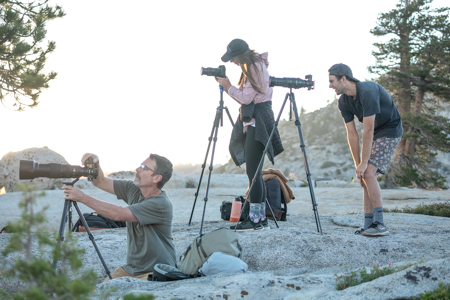 It's not very often that the group gets to sleep in on an Aperture Academy workshop, but this one is an exception to the rule since we were out until nearly 3am the night before. Around 4:30pm the group reconvened and we headed into the valley for a little dinner followed by a sunset shoot in the Yosemite High Country. We stayed in the same location after sunset again so we could capture the night sky in all of its glory. Once the group had their fill we headed to a high country lake where we would start shooting and wait for the moon to paint our scene with light. The group tried out a few different compositions at the lake before we headed back to the hotel for sleep.

The following morning, the group convened in the lobby of the hotel for a little post processing magic. I demonstrated a few processing techniques and then walked around the room to help folks with any questions that they had.