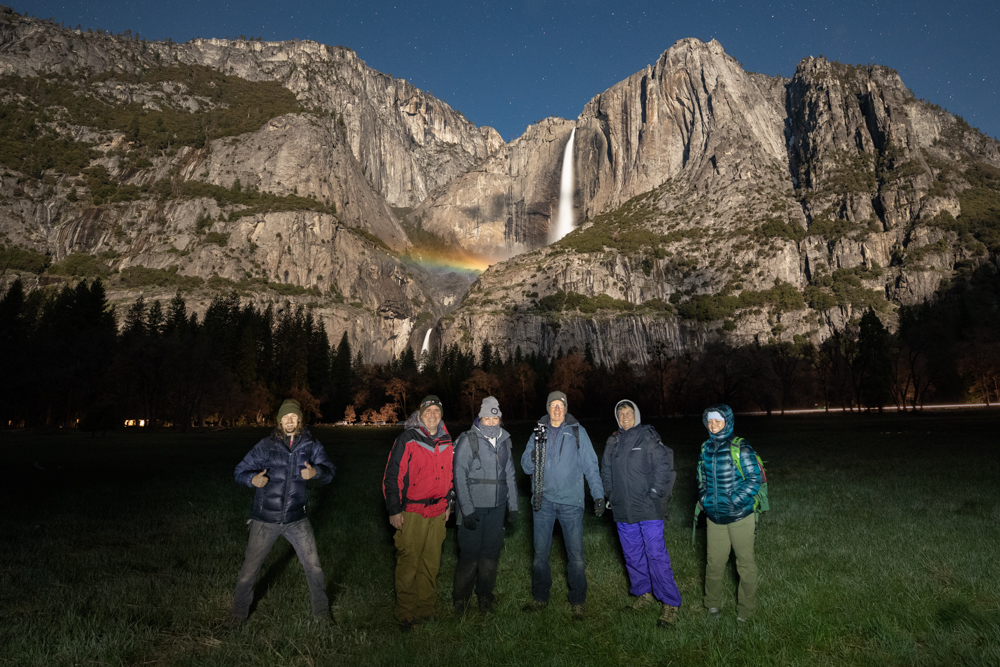 It’s no secret that Yosemite is an incredible place to photograph. With five million visitors every year, it can get a little crowded sometimes. Most of those people are buzzing around in the light of day and as soon as the sun sets they head for the comfort of their hotel rooms. Not us though. We will fight the urge to sleep and make great photographs instead.

On a warm and sunny Friday afternoon I met with a small group of photographers at the Yosemite View Lodge. We introduced ourselves to one another and went over the agenda for the weekend. After orientation we took a short break to gather our things and pick up some food for the long night ahead of us.

Driving into the park, there were a few clouds above the valley so I took the group up to Tunnel View to get a read on the valley. The light was looking pretty good, so we set up shop and got to work. Once the really good light started to fade we made our way into the valley to shoot sunset from Cooks Meadow. First we shot reflections of Upper Yosemite falls from the boardwalk, then we worked our way to the west side of the meadow to shoot Halfdome for sunset. Once the light had died down we went back to the Boardwalk to prepare for some night shooting. After explaining the settings to everyone and helping folks get acquainted with their intervalometers we began to shoot a series of star trails over the falls. We ran the trails for a little over an hour before we packed up and headed to Lower Yosemite Falls to shoot the famous moonbow. The Sierra Nevada received a lot of snow in the winter so the falls were raging. After battling the mist for about 45 minutes the group got their shots and were ready to go to a warmer location. 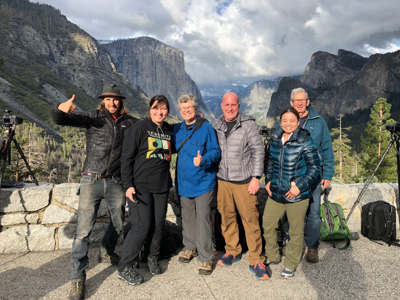 We made our way west through the valley until we reached El Capitan Meadow. This meadow sits peacefully at the foot of El Capitan. We hiked to the middle of it to get a clear view of the rock and went to town shooting pinpoint stars at high ISO and then we shot longer exposures at a lower ISO in order to have a sharper foreground.

The last stop of the night was Tunnel View because the moon was then high enough in the sky to paint El Capitan and the rest of the rocks in the valley with a beautiful glow. We had some beautiful wispy clouds to add to the splendor of the scene as we shot. Before we know it, it was almost three in the morning so we wrapped it up and drove to the hotel to catch up on some well deserved sleep.

The second day started the same way as the first. We drove up to Tunnel View to get a read on the valley and the light was looking even better than the day before. So we got our gear out and set up shop once more. The light had so much potential that we decided to stay through sunset. After sunset, we drove to the lodge to pick up a quick bite to eat. Since the upper moonbow was so elusive the previous night we decided to go back to Cooks meadow and give it a second try. At first, the clouds were too thick, but they eventually cleared giving us the shot that we came looking for. After running star trails for an hour and a half the group decided that they wanted to get a little rest so they could be on top of their game for post processing the following morning.

We met in the lobby of the hotel at 9:30am on Sunday. I did a demonstration on how to merge the star trail images together and then walked around as the group merged their own images together. At noon we parted ways and battled the weekend traffic back to our respective homes.