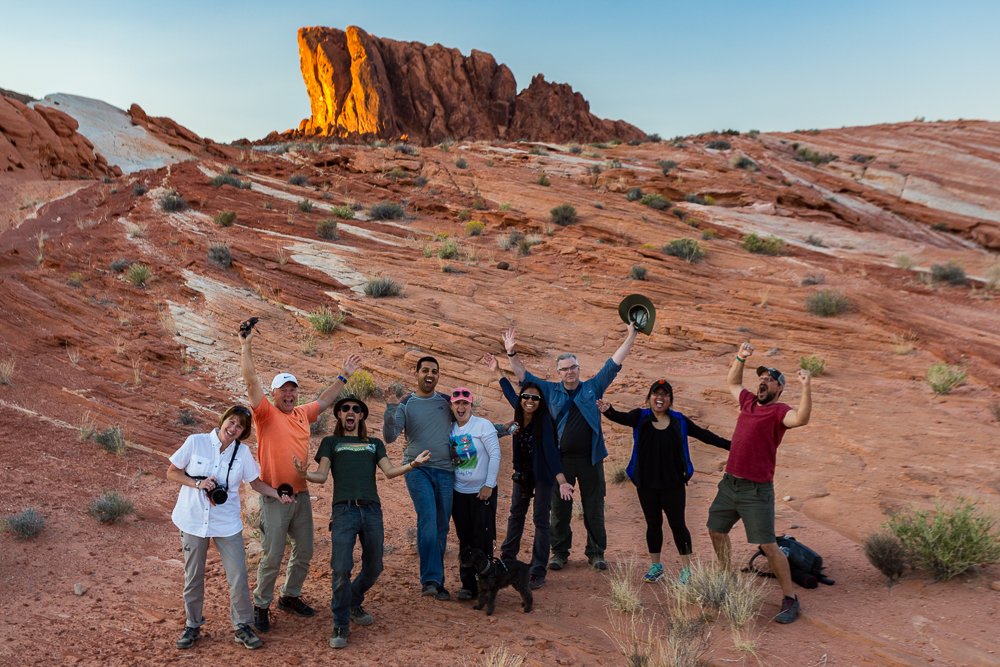 What happens when you take all the best elements of a desert landscape (arches, canyons, multicolored rocks, painted sandstone, wildlife) and compress it down to small, bite-sized area? You get Valley of Fire State Park. A gem, hidden beyond the hills north of Las Vegas, Nevada. Valley of Fire combines all the best elements of the bigger, more well known national parks, and sizes it down in small, still relatively unknown state park. This place is awesome. And every year Aperture Academy tries to find an excuse to go there whenever possible to share the impressive untouched landscape. Nestled in between our Zion Extreme workshops, Our Valley of Fire workshop is just a short drive from Zion National Park, and an even shorter drive from North Las Vegas.

On hand for this workshop, was my friend and co-instructor Mike Wardynski. After spending the last few days in Zion with our feet wet, we were eager to get back to the dry desert and share the experience of this awesome state park with our next group. We met everyone at a hotel in North Vegas to have our orientation where we would discuss the plans for the next couple days, as well as meet up with some old friends and two new ones to join the Aperture Academy family. Mike and I went over the particulars of the workshop, answered questions and chit chatted with everyone before releasing everyone to get some sleep before the early morning start. 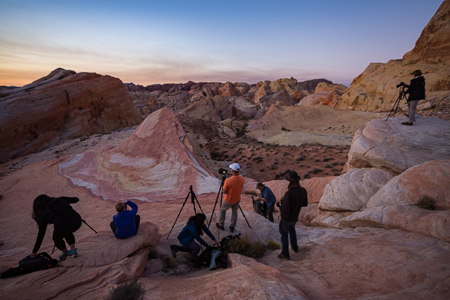 I swear waking up before dawn never gets easier. As our base, North Las Vegas provides all the comforts one could wish for during a photo workshop, except a sightly longer drive time to the park. Valley of Fire is literally hidden behind the mountains north of Las Vegas, and after an hour drive, we were in position for our first sunrise. The sandstone features of this park are pretty unique, and pareidolia (seeing something out of nothing) is the norm with all the crazy swirls and erosion effects on the rocks in this park. Our sunrise shoot was at place colloquially called "Nike rock," for the rather large "swoosh" emblazoned in red in the sandstone before us. We setup there for sunrise and waited until first light began to illuminate the rocks in front of us. Valley of Fire is one of the more challenging places to shoot, compositionally. You really have to let your imagination run wild with what you are seeing, and really explore the park through the lens to find stuff to shoot. There are interesting things everywhere, and they are all hidden in plain sight. Our next two stops would be exactly that. We drove over to find to find two features hidden in the rocks. Using wide angle lenses and peering into the caverns cut into the rocks, one can find some amazing things. None of these features have names, as officially recognized by the park service, and would be impossible to find unless you literally stuck your head in every rock. We split the group up, had them explore and when the sun reached into our shots, we traveled back to Nike rock to explore some more and show everyone how to find interesting compositions using a little imagination. 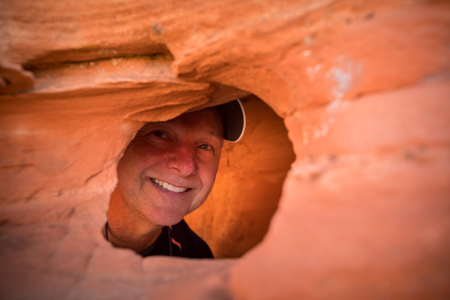 After a midday break in Las Vegas we headed back into the park for our sunset shoot. We headed out to the Fire Wave a couple hours before sunset to let the group explore the area a bit before setting up. This area is huge, and there are so many interesting things that demand attention. The way the rocks are painted is a wonder of nature. Candy stripes are abound with a wondrous pattern of red and white, folded around each other like a giant candy cane. Repeating lines, rolling wavy smooth throughout the landscape, marked with a purple rock here and there, theres little words can do describe it. With a couple vantage points to setup for, our group waited patiently for the sunset colors to appear and the afterglow to loom over us, before we made the short hike back the van, cards brimming with images of weird formations in the last light.

Another dark drive into the park put us near the same area we shot the previous day. After a short walk, we ended up at a place called crazy hill, where the colored pattern on the sandstone looked like someone dropped a couple buckets of multicolored paint eons ago. With some high clouds off in the distance, we caught some color in the skies to the south, further enhancing the beauty in front of us. After the color faded, we traversed down into a little valley, and took the group to a hidden arch. We walked through and proceeded to explore the area shooting all around until everyone was satisfied. From there we took a short hike down a river wash into a little slot canyon by the White Domes area of the park. And there we shot the canyon as well some more hidden features that most people just walk on past. Thats the theme of Valley of Fire. You have to look everywhere and use unconventional camera angles to find some truly unique shots. 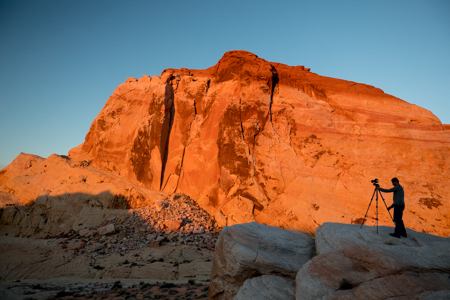 After another break back in Las Vegas, we met everyone at the hotel to do a couple hours of post processing. Using Lightroom and Photoshop, Mike and I showed everyone how we would process our images to make the rocks truly shine. On our drive back into the park, we spotted some big horn sheep, so we stopped and Mike and I lent some big glass out to a couple folks to grab some wildlife shots before making our way back to the fire wave area. As everyone was a little more familiar now with the possibilities abound in this area, our group eagerly bounced around during the sunset glow and made some awesome images using the impressive landscape. No clouds appeared, however the earth glow was even more impressive than the night before, and we saw a mass of colors in the sky as the sun descended into the west. We made our last hike out of the canyon as night fell, and after the drive back to Las Vegas, we had another workshop in the books! A huge thanks to everyone on the workshop! We hope you enjoyed exploring this amazing little gem hidden the Nevada desert. We cant wait to see you all on another adventure!