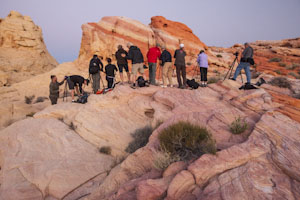 Only a short drive from the excitement and glitz of the famous Las Vegas strip, lies a unique, almost Martian-like landscape. Established in 1935, Valley of Fire State Park features a bonanza of unique geologic rock formations, textures, and colors.

Valley of Fire derives its name from the red sandstone formations, formed from great shifting sand dunes during the age of dinosaurs. Previous inhabitants included the great Basket Maker people, as well as Anasazi cultures, however on this sunny November day in 2012, a new tribe was introduced, a tribe of enthusiastic Aperture Academy photographers.

Aperture Academy instructors Ellie Stone and Scott Davis welcomed their enthusiastic and eager students with an orientation session. Getting to know everyone by name and most importantly their experience allows the instructors to custom fit their instruction to each person's individual skill level. After the meet and greet, it was time to retire for the evening, in preparation for the groups pre-dawn departure time. 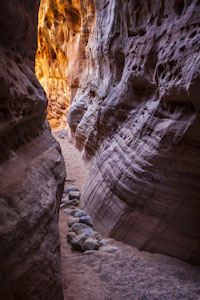 The instructors loaded everyone in the comfy Aperture Academy van, knows as ApCab, for the early drive into the red sandstone valley. First up on the day's itinerary was the iconic Arch rock. The arch is elevated above the road and tucked into the rocky landscape. Although it can be photographed from various angles with a variety of lens choices, Scott and Ellie suggested the use of a telephoto lens in order to isolate the arch from its rocky surroundings. Just a few 100 yards up the road resided another unique landscape feature.

As one looks out into the field of scattered red sandstone, a facial profile appears very dominant in the rocky slope. This is one of the rare occasions that take little imagination to distinguish the geologically created humane profile. However the identity remained up for debate, some suggested it appeared to be that of an old president, while others gravitated towards the idea of an old Indian chief. Regardless, it made for some fun and interesting images. 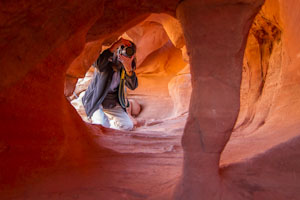 The next stop of the morning was just a short drive, but was filled with lots of intimate landscape details. One of the highlights of this location was an intricately wind carved cave, with honeycomb like structures and a finely detailed, twisting interior arch. Scott and Ellie guided the students to this often-tricky hidden gem, known as Windstone arch.

The students fanned out practicing their newly introduced skills, including the use if polarizing filters and for many this was their first experience out of their cameras program mode. Learning the foundations of manual shooting is not only essential for the budding photographer, but liberating as well.

Ellie helped the students with creating their own unique compositions of the Windstone arch, while Scott demonstrated the technique of creating sun star patterns amid the plentiful arch shaped rocks. 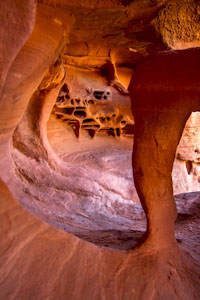 One final stop before the afternoon break was a fun little hiking trail, which contained a large amount of prehistoric petroglyphs. The area is named Mouse's Tank, after a renegade who used the area as a hideout in the 1890's. Just after starting down the trail, there was a very cool image possibility. The moon was situated close the red rock cliffs, so again Scott and Ellie suggested a longer lens, to create the much needed compression, allowing the moon to appear larger then life.

At the end of the trail is a small basin that fills with rainwater; this is the "tank" where mouse would hide out. The water filled rock basin made for some fun reflection shots, which resembled the Aperture Academy logo. Due to the pre dawn rise and light hiking, everyone was ready for a well-deserved afternoon break.

The sunset approaches quickly this time of year, so the group heads out in mid afternoon for their sunset shooting location. Although first taking a few minutes to capture some images of the scenic road, as it twists and winds its way through the vivid landscape. After the winding road shots, it was time to head out on the trail to one of our favorite locations in the park, the Fire Wave. The rock formations in this area are highly unique and beautiful. Imagine a hillside stripped with red and almost white rock. 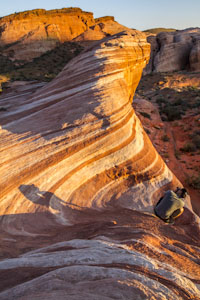 The savory and salty crowd thought it resembled bacon strips, while the sweet tooth's in the group contested the resemblance and pictured the striations as a peppermint stick. Either way everyone captured gorgeous images.

The area is filled with unique colors, strips, and textures, which are only accentuated as the sun fades into the horizon. With a full day of photography and fun under their belts the group loaded into the ApCab to head out for a group dinner.

Day two would begin much like day one, as Ellie and Scott roused everyone just before dawn, to begin their journey into the astonishing landscape. It's not just landscape photographers who think this park is picturesque and stunning, it seems as though car manufacturers are also drawn here.

Both mornings on our drive to shoot sunrise, we witnessed two different car companies preparing to film or photograph their latest and greatest vehicle offerings. Everyone got a kick out of seeing the new BMW, cloaked in a top secret cover, with only a small tear in the windshield, so the driver could maneuver it onto the ramp of the semi truck. Cars are fun, but we came here to photograph some amazing landscapes.

Our sunrise location has swooshes and swirls of red rock, mixed into the paler almost white rock. In fact this location has a distinctive swoosh, reminiscent of the popular sports company, whose name rhymes with spike. This particular area is rich in colors and textures, so it's easy to spend hours here, however we had more stunning locations to visit, so down the road we went.

Next stop was only a short drive, and turned out to be a favorite of many. Pink Canyon is carved by wind, sand, and rain. The colorful canyon walls twist and turn, creating some fantastic compositions.

Ellie and Scott walked through the canyon, assisting with compositions and some white balance settings to bring out the unique and fantastic kaleidoscope of colors. Sometimes it's the small details that can get overlooked, so the instructors made sure that the students took their time and photographed those interesting textures and details. After all had their fill of Pink Canyon, it was time to make their way to another fun and photogenic canyon.

Ellie and Scott led the group around the White Domes trail. This trail has a nice slot canyon, as well as some more astonishing, intimate details. At the exit of the slot canyon is a fantastic little spot to photograph. Warm stripes of sandstone fold into the canyon floor, speckled with cool toned river rocks. The contract of tones and textures creates some unique and creative images. Memory cards were filling and stomachs growling, so an afternoon break seemed in order.

After an afternoon siesta it was time to head out for the final sunset shoot. The Fire Wave area is so rich in photographic opportunities that the group returned for some different perspectives. Swirling colors, combined with desert shrubs, offer up some lovely abstract images. As the last of the day's light started to fade, the sky suddenly erupted into shades of orange and red. The fiery sky was a fitting way to cap off our Valley of Fire workshop.