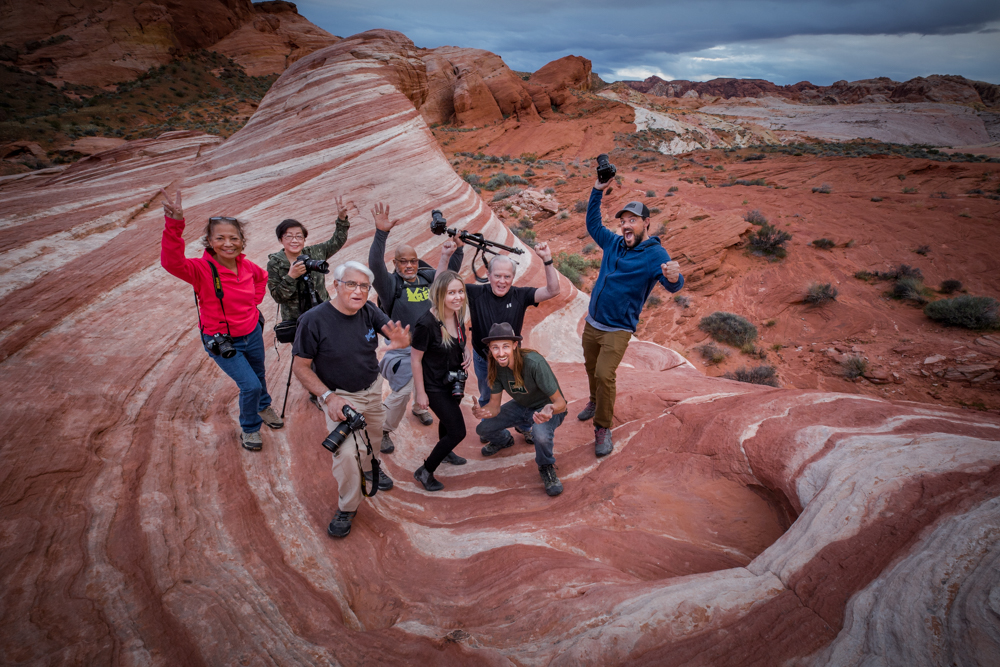 Tucked away in the desert of Nevada lies a hidden gem that most landscape photographers overlook. Valley of Fire State Park is a relatively small 40,000 acres when compared to parks such as Yosemite and Yellowstone, but don't let its size fool you. This park packs a lot of punch! Its filled with beautiful Aztec Sandstone formations and enough colorful striations that could keep a landscape photographer busy for weeks.

On an early Wednesday morning in March Scott Donschikowski, myself, and six enthusiastic photographers drove through the dark in order reach Valley Of Fire in time for sunrise. Once we reached the park we drove to a formation called Nike Rock which gets its name from the iconic swish mark located at its base. Once the morning light had faded and harsh light was blowing out the rocks we made our way over to Windstone Arch to photograph wind carved tunnels that swirl through red sandstone. This area is always a fun location to play with canted camera angles and ultra-wide lenses. After about an hour or so of exploring the area, we went back to Nike Rock because the back side of it was still in shade and there was no shortage of great detail shots begging to be taken. Around 11 am or so we drove back to North Las Vegas to catch up on some rest and get a little lunch. 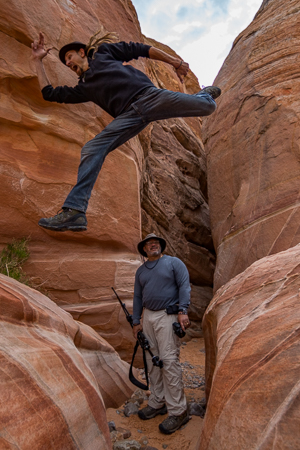 In the Afternoon, Scott and I took the group to the most iconic formation in Valley Of Fire. It's called the Firewave and can be reached via a short half mile hike through a small slot canyon and wash. It was a cloudy afternoon but that did not stop us from taking on the task of photographing this beautiful rock. In fact, the clouds were quite dramatic and I know the group walked away with some great images. As the sun set in the western sky the group walked to the van and we made our way back the hotel.

The Following morning was a slightly earlier rise since we had a short walk to reach a beautiful rock called Crazy Hill. This particular feature is a sandstone fin that looks as if someone spilled yellow, pink, and red paint and forgot to clean it up. Once the sun rose the group worked the area a bit before we headed around the corner to Thunderstorm Arch. Only one person can fit in the arch at a time so the rest of the group combed the area and found many great compositions. Once everyone had the opportunity to shoot the arch we packed up and headed to the White Domes Trail. From the parking lot we walked for about a half mile before we reached a very pleasing s-curve carved through striated sandstone. While some folks photographed the curve, others made their way into the nearby slot canyon to work a few different compositions. Before we knew it, the morning was escaping us and we made our way back to the hotel. 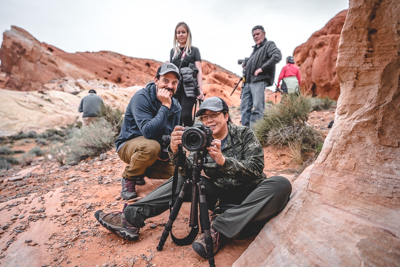 After Lunch and a small break, the group reconvened in the hotel lobby for a couple of hours of post processing and image review. Around 5pm we headed back to the park for our last shoot. Since the fire wave is so interesting and there are a lot of other features in the area we went back to that location for sunset. Since we had been in the area the day before it didn't take very long for folks to find a good composition and get to work. The sky did not light up but we had some nice clouds to photograph anyway. This was truly a great group of photographers and Scott and I had a blast teaching!