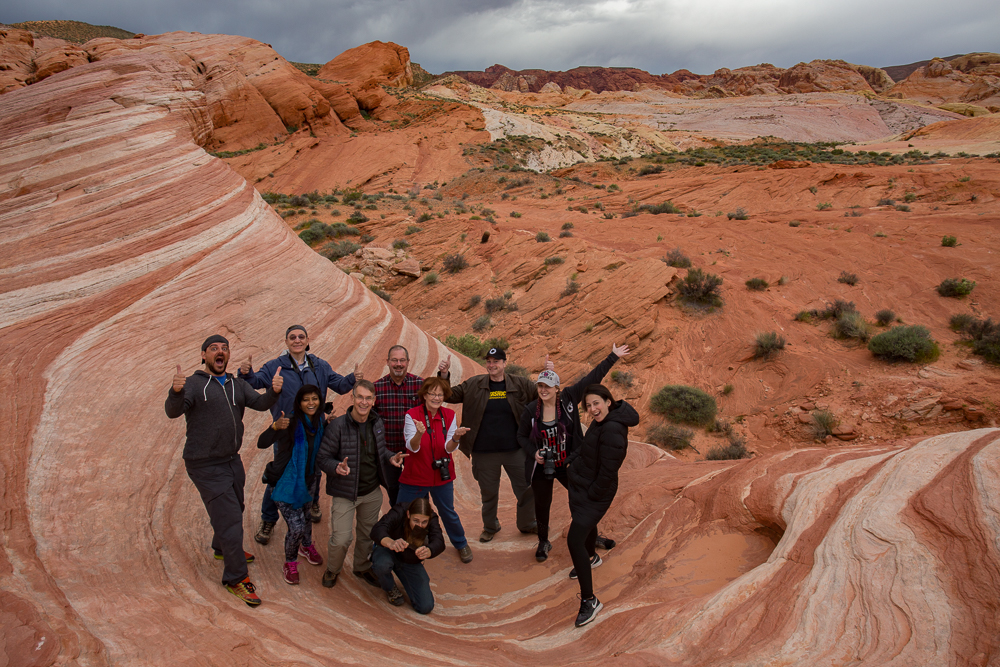 On a beautiful Tuesday Evening in March Scott, myself and nine Aperture Academy students gathered at the Hampton inn in North Las Vegas to get acquainted with one another. The group was enthusiastic and ready to take whatever Scott and I had to throw at them.

On the first morning, we left the hotel at 5 am to ensure that we would make it to our shoot location on time. The park was a bit of a drive from the Hampton but North Vegas is the closest place to the park we can stay that offers comfortable lodging.

We rolled into an area called Nike rock about twenty minutes before sunrise and got the group dialed in. Some folks wanted help with their settings while others wanted guidance with their compositions. Luckily, Valley of Fire is a beautiful park and there is no shortage of interesting subjects, even after the sun has risen. After firing off some sunrise shots we took a short walk to one of Scott and I's favorite spots to shoot otherworldly rock formations that look like they belong in a Sci-Fi movie. 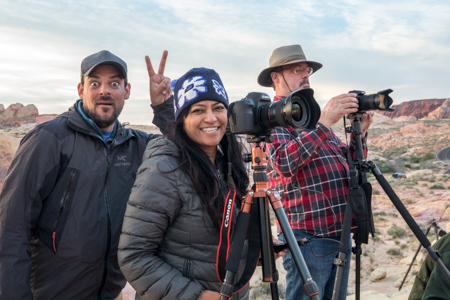 From there, we gathered up the gang and drove to Windstone Arch which is a small arch with big personality. In fact, there are two arches within about a forty yard distance of each other and I can't decide which one is my favorite to photograph. Both arches have been very distinctly eroded, leaving the photographer with many leading lines to play with. The possibilities are almost endless! We shot in the Windstone Arch area for about an hours or so before the light got the best of us. Once the good light was gone we drove back to Vegas for some lunch and a quick nap.

As the day rolled along some dark clouds began their advance on the park threatening our sunset. Never the less, we gathered everyone up and made our way into the valley for our evening shoot. After about a half mile walk we arrived at the Fire Wave which is the most iconic spot in Valley of Fire. The skies still looked a little threatening but after some time a hole began to form on the horizon. Now I've been wrong in the past but I felt pretty good about our odds of seeing some color in the sky that night and just before sunset the sky lit up with glorious shades of purple, orange, and pink. Scott and I suggested a few locations to the students in order to include the epic sky. The group was happy to have a very successful first day of the workshop and some of us even went out to get what turned out to be mediocre Thai food to celebrate. 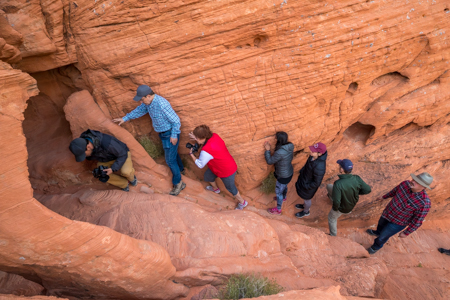 The group piled into the van at the same start time the following day and after a few sips of coffee, we started to wake up. The first shoot of the day was to take place at a location called Crazy Hill which gets its name from the wild colored striations that run along the side of the rock. We had a few clouds hanging up in the sky that morning and a few of them caught some rather nice light too. The students played around with a few different compositions before we made our way to a small arch just around the corner from Crazy Hill. Once the group shot the arch they scoured the area for compositions which were pretty bountiful since the wildflowers were in full bloom. After grabbing a few keepers we continued our journey with a short walk in the White Domes area to shoot some very interesting striated rock formations which conveniently have a nice slot canyon right next to them. From there we drove back to Vegas to do the daily ritual of food and sleep.

At 2 pm the group gathered in the hotel lobby to go over a little post production magic. Here Scott and I did our best to make the rounds and help people with whatever questions or problems they encountered. This is always a highlight for us since it allows us to see what everyone has captured and once in a while we get to witness the wow moment when someone realizes the full potential of their image. 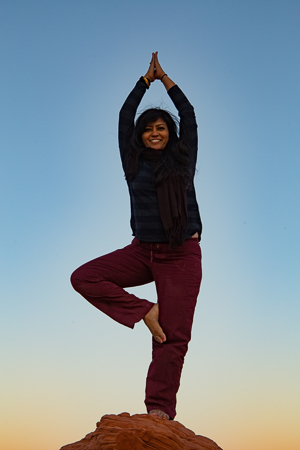 Once we wrapped up post it was time to hit the road again for the last shoot of the workshop. Since there are so many different locations to shoot at the Fire Wave we headed back to that spot for a second helping. Although this time it had rained in the day time which flooded some of the slot canyon that we normally walk through. That was no trouble though since we were able to skirt around the canyon by walking up a short slab of rock.

When we got to the Fire Wave area the group spread out and began scouting out various compositions. Some chose to focus on Gibraltar Rock, while others worked the Fire Wave, and still others decided to shoot into the eastern sky where most of the color was collecting. Once the sun went down we geared up with headlamps and made our way back to the “Ap Cab”.

On the drive home the inevitable topic of food came up and the group decided it would be better to try our luck with Mexican food that night. There just so happened to be a fantastic Mexican restaurant down the street from where we were staying too. The portions at Viva Zapatas Mexican Restaurant were deliciously huge. I think the entire group over indulged on chips and salsa before our meals even made it to the table.

What can I say? This was yet another trip for the books. Great conversations, great locations, and a superbly fantastic group!

Mike, Scott and the rest of the Aperture Academy Team