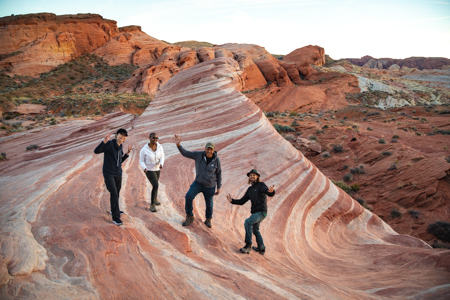 Deep in the desert of Nevada lies a little known oasis of colorful sandstone. Candy colored striations swirl throughout the landscape in an unbelievable way. Valley of Fire is an absolute gem to visit and it is still a little bit off of the radar. This workshop is all about the details. There are incredible formations just waiting to be discovered by a photographer's eye.

With an early rise in North Vegas, the first stop of the trip would be Nike Rock. The rock gets its name from the iconic looking swoosh that runs along the base of the sandstone. The group traversed the area while I pointed out a few of my favorite locations to shoot the rock from. After the morning glow had faded from the sky we packed up and headed to our second shooting location. This spot was a couple of tiny, but very unique arches. The most famous is known as Windstone Arch. Once the group had their fill we headed to one final location where there was seemingly endless lines and textures to photograph. Before we knew it, it was time to head back to our hotel for a little midday break. 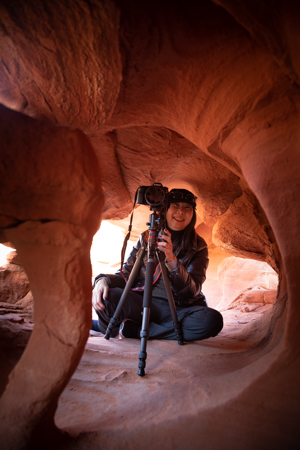 After some rest and lunch we headed back into the park for our second portion of the day. We pulled into a little pullout and proceeded to hike for about twenty minutes though a beautiful wash. At the end of the wash is the crown jewel of the park, The Fire Wave. This formation is unmistakable once you've seen it. It's a wild mound of red and white swirls that look like something out of a Dr Seuss book. The group had plenty of time to scout the surrounding area and prepare for sunset. As the sun began to set the shutters began to fly until most of the glow had disappeared. We then made our way out of the slot canyon with the little light that was remaining.

The following morning we had another early rise so we could catch first light at Crazy Hill. Crazy hill is just that… Crazy. It looks as if someone took a bunch of multi colored paint and poured it over the rocks. After the morning glow faded, we walked around the area photographing some pretty amazing striations. We then walked to an arch known as Thunderstorm Arch. It's a small arch some the group took turns climbing inside it for a photograph. Once everyone had their turn, we made our way to the White Domes portion of the park to photograph one more slot canyon. The canyon is nice but what makes this area really special is actually a collection of rocks that sit inside a snaking curve of striated sandstone just outside of the canyon. Once everyone finished up we headed back to the hotel for a little break and some post processing.

For the final portion of the workshop, we headed back to the Firewave for one more sunset. The group scoured the area again, finding new formations that they had missed on the first evening. Once the light began to get good, the group crowded around the Firewave once more and shot until the light went flat. We concluded the workshop back in North Las Vegas where a few of us went out to celebrate with some of the best Tacos in the US. Tacos El Gordo is favorite amongst all of us here at Aperture Academy.