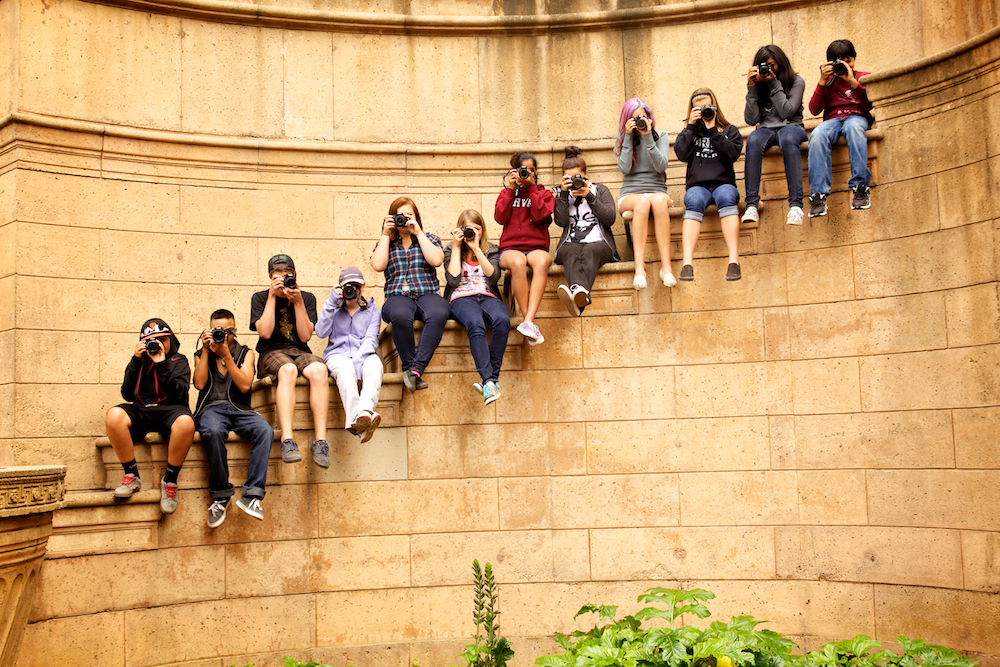 Aperture Academy is a growing family of fantastic photographers - made up of those just starting off with a brand new camera, and veterans to the craft who are getting in to the swing of the digital era, students (young or old), and some happy snappers, all a great part of the ApCab FamBam.

This summer of 2012, instructors Scott Donschikowski and Alicia Telfer had a strong group of twelve aspiring photographers for the Aperture Academy week-long summer camp that caters to younger photographers, ages 12-18. The goal of this "camp" is to expose enthusiastic young photographers-in-the-making to all aspects of photography. The course covers landscape and wildlife, portraiture and product, the craft of printing, and presenting images for their very own gallery show.

This summer's course included a few students which had never picked up a camera, a couple who loved photography, and the rest were just along for the ride... but, in the end, all of them were shooting in manual mode and completely understood the elements and concepts of the enticing world of photography!

MONDAY: Portraiture in the Pruneyard 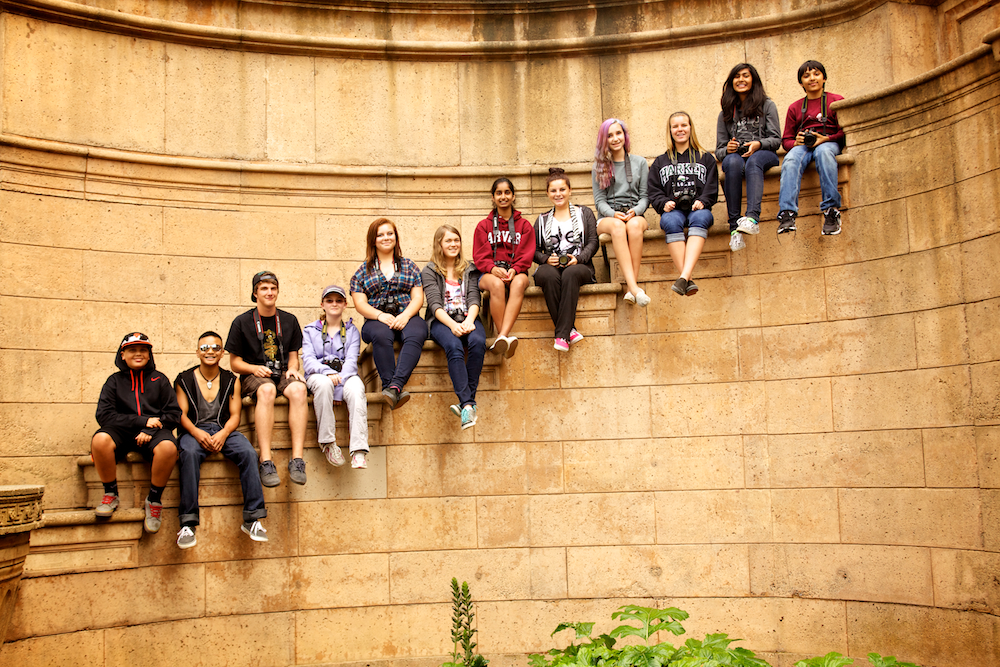 The first day of camp: new faces, new computers, cameras, and the famous ApCad introductions. The Aperture Academy instructors like to start off all the workshops getting to know their students, so they can help each one work on their goals for that day (and in this case, for the week). The instructors and students jumped right in to it, from setting up studio lights and backgrounds to covering the importance of light and posing your subject.

We like to get each student in front of the camera so they can experience what it is like to be modeling, and not just taking the pictures. This is a good exercise because it allows them to practice making their subjects feel comfortable. After everyone had a turn, we switched up the subject and had a quick lesson on product photography, then took a break to picnic lunch in the courtyard of the Pruneyard.

After our stomachs were filled, we set out toward downtown Campbell, to cover portraits in natural lighting and how to pick out backgrounds that do not distract the viewer's eye. Once back at home base (the Aperture Academy Gallery), we helped each student set up their computer for the week. We covered the complete work flow of a photograph - selection, production, and the benefits of social media. Our first day was complete, with a lot of great images and happy "campers."

The San Francisco Zoo is the ideal workshop for an introduction to wildlife! The animals are contained, happy and active, ensuring a lot of practice for action shots.

We ran around the zoo together shooting the lions, flamingos and admiring the gorilla preserve where Hasani, the baby gorilla, was flirting with the other guests at the zoo. It was warm and sunny out, which challenged the group to capture the animals in the correct light. Scott and Alicia introduced the AIServo focus setting, to track moving animals. This setting helped ensure focused shots and continuous, or rapid fire, shooting so everyone would have a variety of images to choose from later when back at home base. 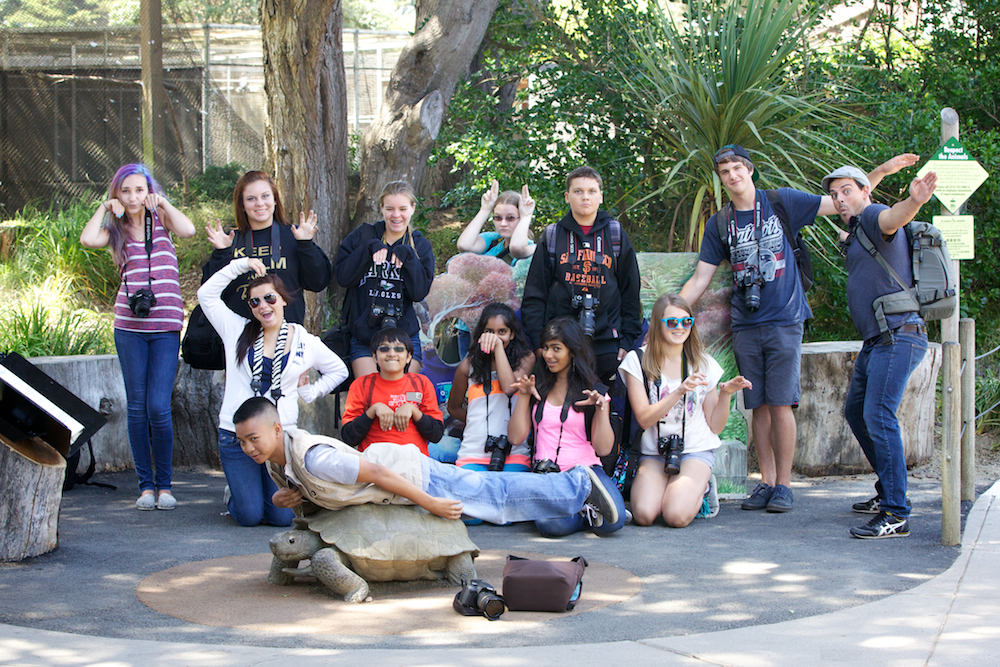 Heading South, we did a head count of how many people had been to our predetermined destination of Natural Bridges. With a majority vote, we switched gears and headed to a new beach, Shark Tooth Cove, which was a little hike in to get to, but well worth the extra time. None of the students had been to this beach, which added to the excitement as the waves crashed and the sky broke open to blue, allowing the students to get some unique shots. We then headed to the Santa Cruz Beach boardwalk for an introduction to journalism photography, which some campers were a bit intimidated by initially, but soon embraced.

Taking photographs of strangers in a new place is not always an easy thing to do, so to ease everyone into the subject, the instructors had the students try to capture the essence of the boardwalk, and tell a story of our day using only 5-7 images. As we introduced the technique of "shooting from the hip," the whole group got in to it. Switching up shooting and camera angels, we left the Cruz with some fantastically fun photos to share with our photography community!

Back up to San Francisco, we headed on our last (sad face) photo excursion of the week. The plan for the day was to visit some of the places with awesome vantage points of the Golden Gate Bridge. The Presidio area has been in a constant state of construction and rehabilitation for over three years, and the local government has spent countless hours rehabbing the bluffs and batteries above Marshall and Baker Beaches. With their activities finally slowing down, we seized the opportunity to travel up there and see the Golden Gate from a different vantage point than was possible during the heavy renovations.

Spectacular views were to be had, and the bridge felt so inviting that the group begged us to be able to walk across and do some detailed photography on the bridge itself. Alicia and Scott obliged, and took the whole group halfway across and pointed out how to shoot such a monstrous object. Before long everyone was getting hungry, so we headed back to the ApCab and proceeded to lunch, and then on to The Palace of Fine Arts.

The Palace was another place to practice our hand at architecture. The students had a blast running around finding different and cool spots to shoot. The interior of the rotunda, the exterior pillars and doors, the beautiful greenery, the swans, it just goes on and on. But sadly, this day had to end, and quickly the time ran away while everyone was enjoying their surroundings. There was a camaraderie present in the ApCab on the way back to HQ, with an impromptu karaoke session breaking out with the radio on. And it did feel a little sad that this was the last travel day with the group. But alas, there was work to be done... after all, we had a gallery showing the next day! 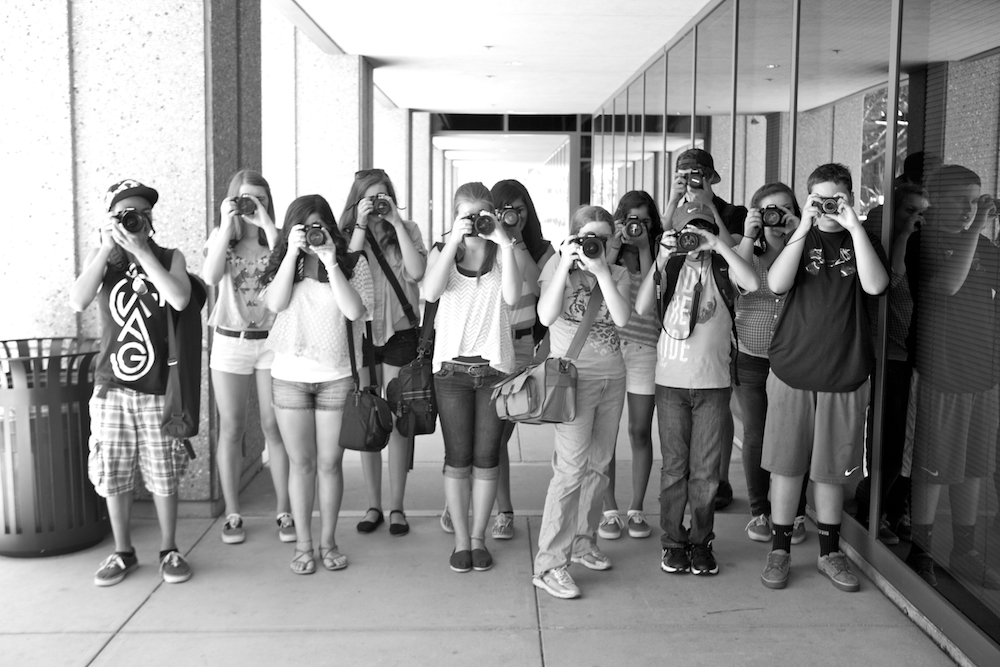 It was time to start prepping the images and making the final cuts and edits to them before printing and mounting. Alicia and Scott were impressed with the work ethic that these photographers possessed. They diligently massaged their images to top-notch quality and print-readiness very efficiently. During the processing, the students also prepared slideshows of their favorite and best images of the week, to put on display along with their mounted prints. Scott and Alicia also had them write artist statements: brief explanations of who they are as photographers, their aspirations in photography now and in the future, and also to describe something personal about themselves and their art.

As the hours behind the computers wore on, we took a break by dividing the group into three teams and sending them out into the Pruneyard to collect 20 different images for a photo scavenger hunt. The scavenger hunt was designed to test their critical thinking skills and problem solving, as well as to re-enforce the photo skills they had learned in the past week, all while working as a team and communicating with their fellow photographers. 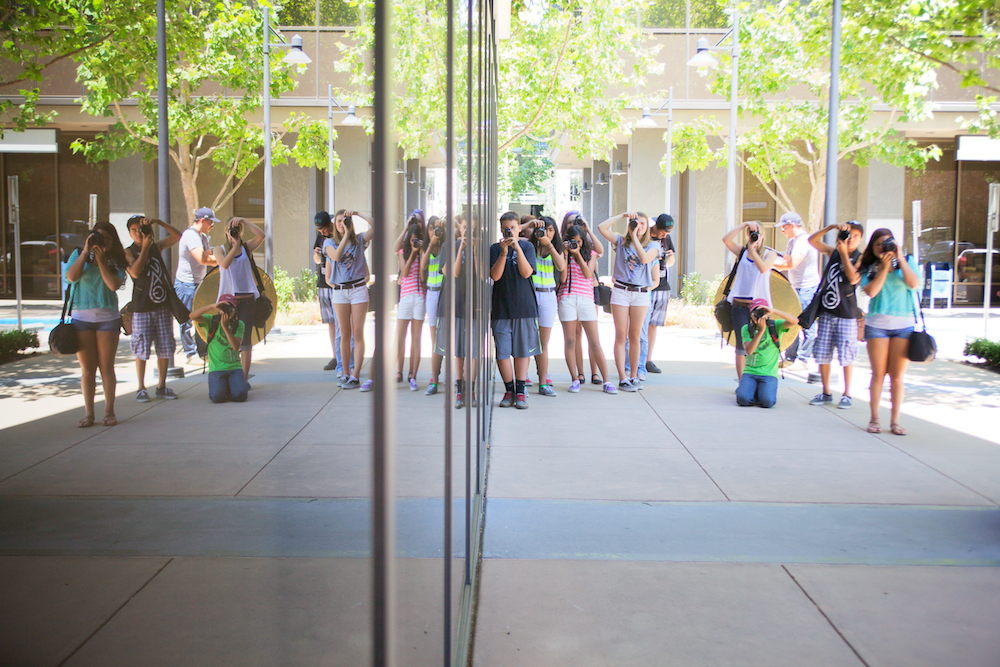 And before we knew it, it was time for the big show. Most of us have never had our artwork, pictures, names, or likenesses on display in a professional gallery. What an opportunity it is for these twelve creative young people, to produce professional quality work, and have a professional quality gallery showing for all to see! A pretty exciting time to be an aspiring artist.

These 12 photographers produced incredibly beautiful artwork throughout the week at Aperture Academy. We have no doubt that if they keep their skills working, and keep that blade sharp, that they will go on to produce incredible artwork into the future.

We also want to give a BIG THANKS to the parents! Without your support, these kids would not have been here learning, having fun, being so creative. It takes someone to nurture that inner spark and keep it lit, so we thank you... and they will, too!

Alicia, Scott and the rest of the Aperture Academy Team are extremely proud of you! Until next time...