The Aperture Academy has been offering on-location photographic workshops for almost two full years now, and in that time we have instructed students from the very youngest at 12 years, to the very oldest at 83 years. But more often than not, the bulk of our students are aged 25 and older. Which got us thinking that we should offer an age specific workshop geared towards inspiring young minds. The Aperture Academy Summer Camp, or ApCamp, was born out of this idea - A weeklong series of workshops to instruct and inspire high school aged students in a multitude of photographic settings. It was an amazing experience both for the kids and the instructors; the most rewarding aspect being the look on our students faces when they finally reached that eureka moment. Here is a short recap of the weeks events.

Monday: Portraiture in the Pruneyard 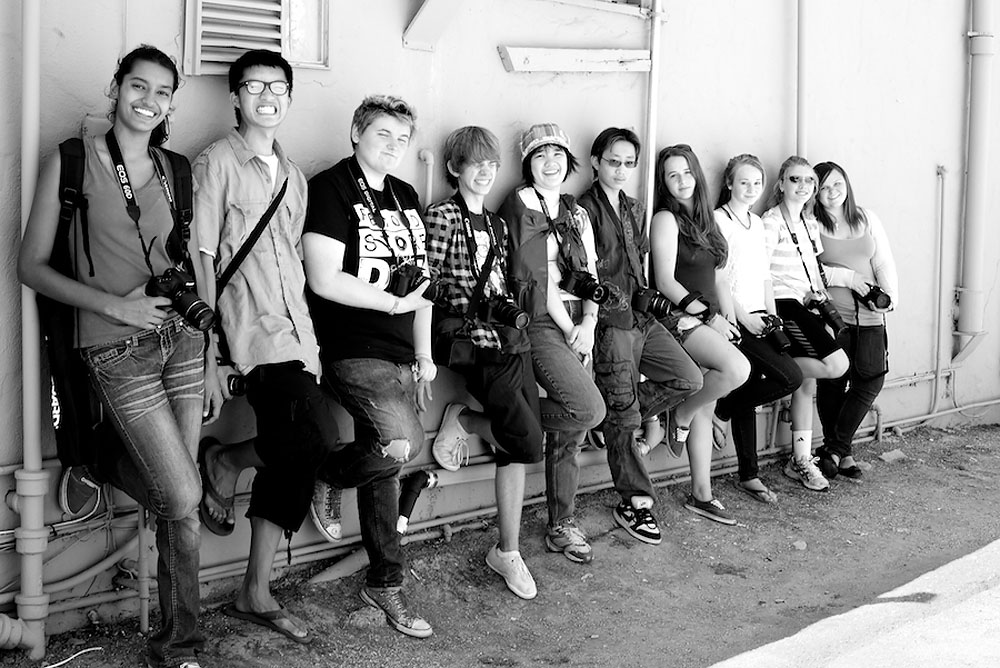 After the Aperture Academy's customary introduction, we covered the basics of photography. Going over ISO, shutter speed, aperture settings and white balance. The students grasped the fundamentals with ease, so we quickly introduced them to studio lighting and the proper way to set up equipment as well as proper lighting techniques to make sure that our models were well lit! After everyone had a chance to model and shoot indoor portraits, we switched gears and demoed the lighting difference for product photography! Each student had to arrange a product to create a pleasing image for their client (Canon) and produce three different compositions to share. In the meantime, others got a chance to work with wireless strobe lighting and explore the differences between them and continuous lighting. After a picnic style lunch in the Pruneyard, we headed towards downtown Campbell to share how to look for interesting backgrounds and desired lighting for outdoor portraits! Instructors Scott and Alicia were happy to jump in and serve as models, so every student had a chance to shoot each scene. 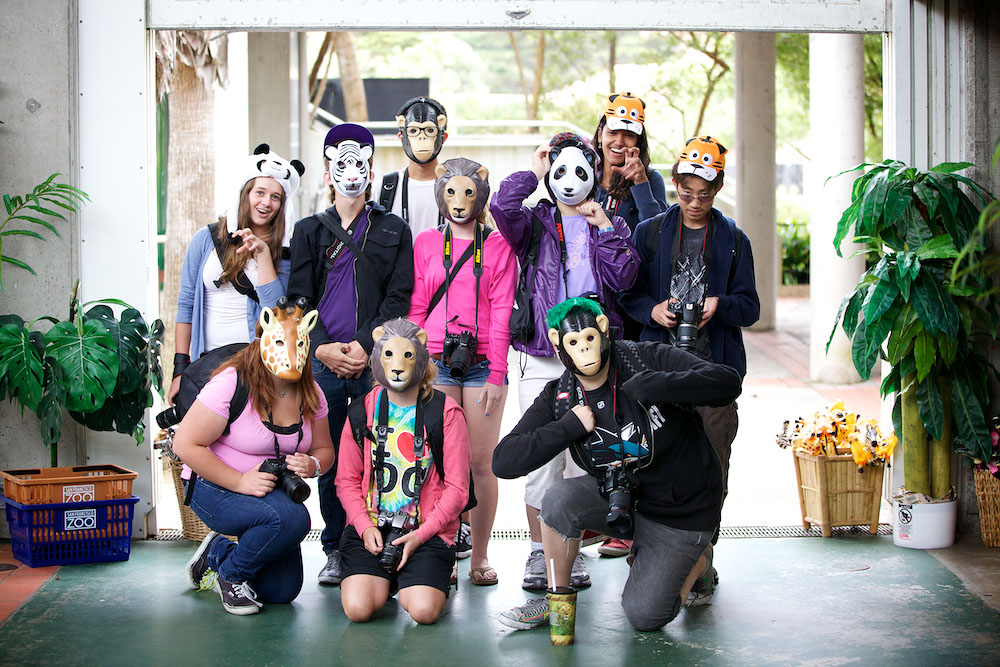 A perfect location choice for the second day of this week-long workshop, as wildlife photography is in fact, portrait photography! The day was perfect, with a nice thick layer of fog resting perfectly over the top of the Zoo, just for us! The animals were active and students were matching them! Running all around the Zoo, we stopped for a group shot in one of the gift shops were each camper happily changed their identity to another animal! The mandrils were back, and excited to be there! The gorilla preserve was a favorite spot, as Hasani the baby gorilla followed his papa gorilla and copied almost every move he made; we looped around to find the lions preening along with a pacing tiger giving us plenty of time to capture some great action shots! After grabbing some food at the leaping lemur cafe, we had to stop by the penguins to say hi to Pepper, the cutest singing penguin! 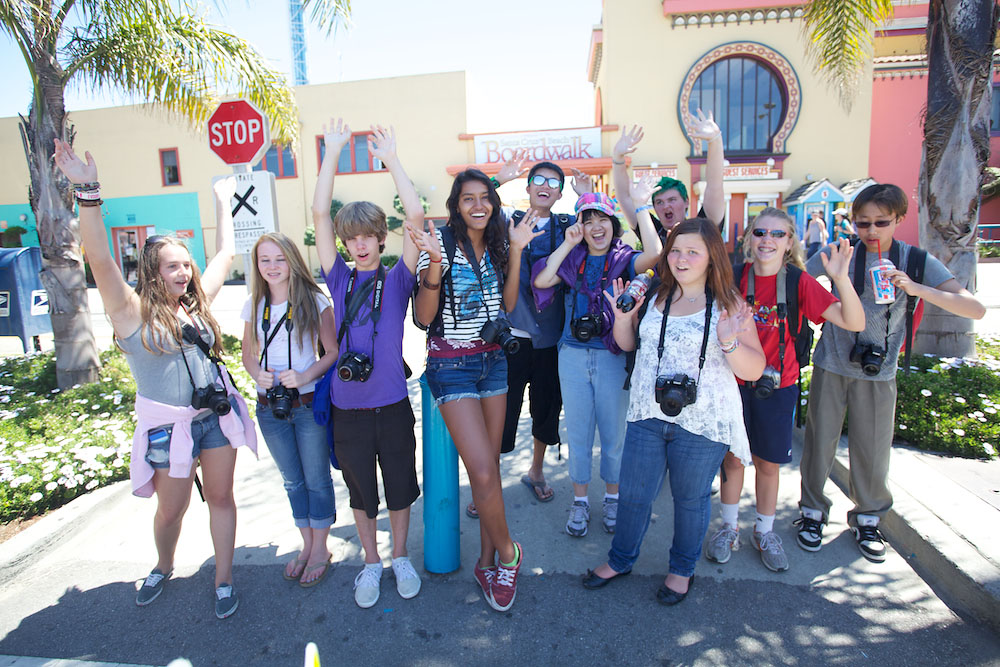 On day 3 of our ApCamp adventure, we started shooting at Natural Bridges State Beach in Santa Cruz. The students got a chance to experience the seascape with full fog, and we kept on shooting through the lighting change until the sun finally broke though. With the fog all but burned off we headed to the Beach Boardwalk and we gave the students an assignment; along with candid portraits, roller coasters and delicious fried concoctions - we had each photographer capture the essence of the Santa Cruz Beach Boardwalk in only 7 images. This was a perfect introduction to photojournalism and street photography! After we made sure everyone had their fix of sun, fried Oreos and photos- we headed back over the hill to the ApCad gallery to produce our editorial projects and start advertising for the gallery show that Friday! 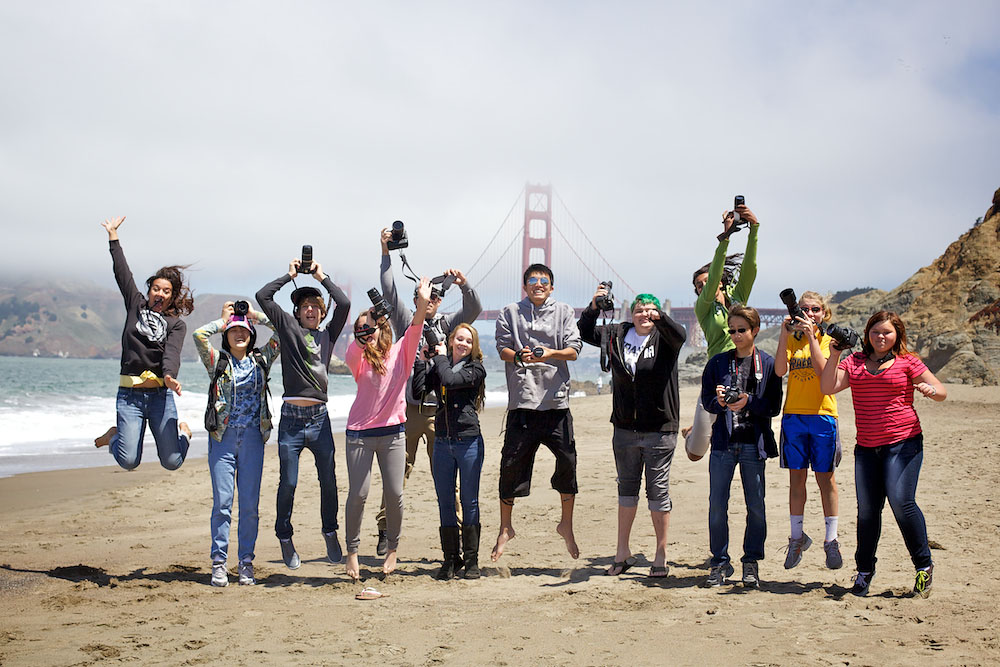 Final day for shooting. A day of reaction and capture. The last day to take everything given in the past week, and apply those leaned skills to the photographs taken before the final show. We headed back up North to Baker Beach in San Francisco, a common meeting ground for fellow ApCad family members, only to find the perfect amount of fog perched on the tiptops of the Golden Gate Bridge towers. We lined everyone up, and the shutters went off! Always encouraging students to try different angles and perspectives, most of the students would end up farther away and facing the opposite direction of how we initially had them set up! The images coming from every photographers cameras were AMAZING! After about 2 hours at the beach, we lined everyone back up to demonstrate how to take panoramic images and then we were off to the Palace of Fine Arts. At the Palace, it was a lesson in architecture and abstract compositions. Trying feverishly to capture the Palace in as many different angles and abstractions as time would allow, our students also found the local wildlife a perfect subject for the foreground of this truly amazing landmark. 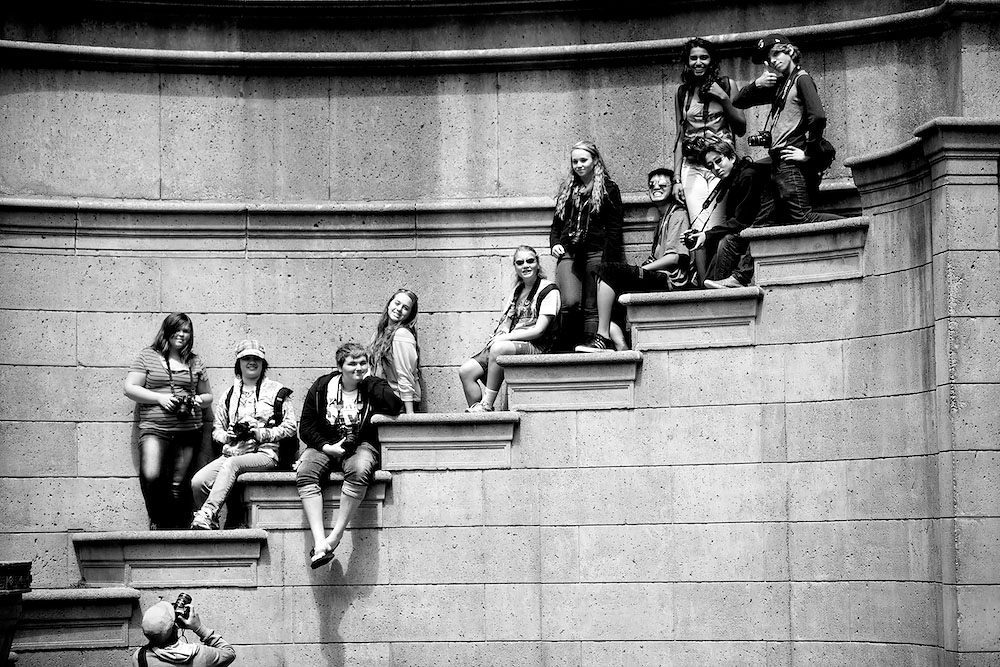 Back where it all began. Final image selection and processing began as we whittled the thousand or so images that each student took down to 5 final photos which were to be printed, matted and displayed on the walls of the gallery. While Alicia and Scott were printing the students photos and clearing the walls, we had the students split into two groups for a photo scavenger hunt! The two groups had to take 15 different images using the skills they had learned throughout the week. And after they took the photos, they had to process them, and then present them while Alicia and Scott critiqued them on their technique. Both teams did awesome and learned how to work together as a group to achieve a common goal, as well as ask the surrounding patrons of the Pruneyard for help in achieving some of the more difficult tasks. After all the images were printed, the students learned how matte and display their images on their specific section of the gallery wall. They polished off their photographers bios, which were displayed under a photo taken of them during the week. After everything was setup, it was time for the show!

The culmination of a project for an artist is the gallery show. It gives us a chance to showcase our best work in a manner which we choose, and to the masses. In this case, the students were encouraged to invite whomever they wanted and to show them all of their work from the weeks adventures. During the festivities Alicia and Scott walked around and snapped some photos of the students with their families, as well as interacting with the parents, detailing the hijinks of the whole week. What a fantastic finish for a marathon week of shooting!

We had such a great time, it was an amazing experience and our students rock! Thank you so much guys you did so well! Until next summer.....Alicia, Scott and the rest of the Aperture Academy Crew

Until next year...Scott, Alicia and the rest of the Aperture Academy team!