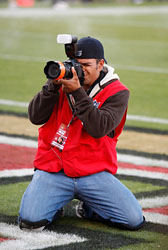 The inaugural Aperture Academy Intro to Sports Photography workshop took place on May 7th 2011. The students met at Ortega Park in Sunnyvale for a fun filled day of learning the basics to shooting sports.

Aperture Academy instructor Tony Medina led six students on a journey into the world of sports photography. The students were excited and enthusiastic about learning all about shooting sports and getting to put what they learned into practice by shooting two different types of sports during their workshop.

Students began the day learning about the equipment and settings commonly used to shoot sports at all levels. After their “chalk talk”, they had an opportunity to put what they had just learned to practice by shooting a basketball game.

While shooting the game the students had an opportunity to capture great action images from all angles of the basketball court. Excited and ready for more, we jumped into our cars and headed to San Mateo High School to shoot an adult league soccer game.

The teams we shot consisted of NCAA Division one players and former MLS players. The game was fast and had plenty of action. The students walked the sidelines of the field shooting the game with a new perspective. Tony challenged the students to accomplish specific tasks while shooting the game. They did it!

There were a lot of smiles and LCD screen sharing going on throughout the workshop as the students showed off their awesome images to each other. Not only did the students get a chance to use their equipment. They were given the opportunity to shoot with a 400 2.8 L lens, a Mark 3, and a 70-200 L 2.8 lens. Many left the workshop with ideas of starting a new savings account because they fell in love with the equipment.

At the conclusion of the game the students had the opportunity to learn about the post processing and selling images. Almost on cue a fan from the game approached the group and asked where the pictures would be posted for him to buy.

All in all this was a great four-hour workshop for the students and instructor. There was a lot of learning, laughing, and great image capturing.

I am definitely looking forward to the next group of students to teach all about the world of sports photography!

Until next time...Tony and the rest of the Aperture Academy team!