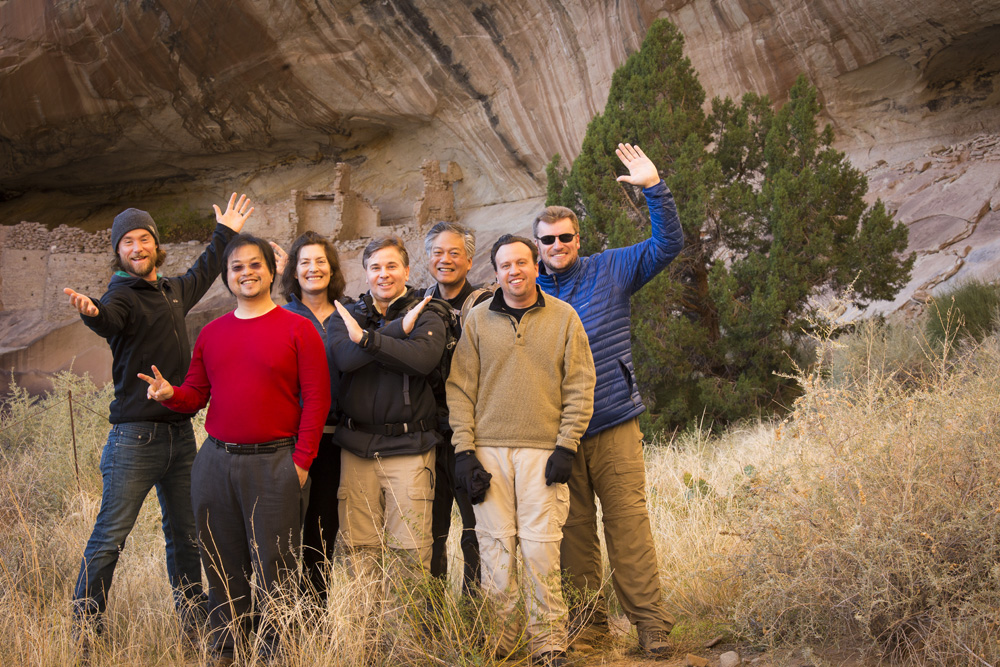 If you are driving several miles along a straight road in the desert, it may seem repetitive, however, the Desert Southwest has secret locations hidden just beyond the pavement, and this is what we focused on (pun intended) with a group of eager photographers in the fall of 2015.

On our first day of the workshop we drove to a small canyon located on the Cedar Mesa Plateau. These 800+ year-old Anasazi granaries were a quick 1-mile hike and are a pristine (if not, the most pristine) set of ruins in the southwest. Often referred to as "House on Fire" this location has an amazing "fire" pattern in the stone striation alcove that these Puebloan ruins are built under. After an hour of capturing a variety of compositions we photographed the near-by Anasazi handprints before moving on to our next stop, Butler Arch.

Butler Arch, located high atop Butler Wash, is an amazing geological location, tucked away and hard to find if you don't know where you're going. Once we arrived, we photographed this perfect little arch with the fall colors as a backdrop in the wash below. Given the extreme near/far of this composition we took several exposures with 3-4 focal points so that later we could build "focus stacked" images. This would help maximize depth of field for the sharpest image possible image.

With a full morning of hiking and photography complete, we drove to the nearby town of Blanding Utah for a famous drive-in burger joint. After a great lunch we were off to our 3rd and final location -- Fallen Roof Ruin.

Of all the places I have visited in the desert southwest, Fallen Roof Ruin is one of my personal favorites. These three small Anasazi granaries tucked into a tiny alcove are adorned with a beautiful rock patterned ceiling. You can see that the layers of sandstone are slowly but surely falling away due to gravity and the hot and cold elements. Giant pieces of stone liter the floor of the alcove. Even though the ceiling is slowly falling away, it seems to have withstood centuries of the elements, evidenced by the ancient handprints still visible on areas of the stone ceiling.

After about two hours at Fallen Roof Ruin we started our hike back to the van. It was getting dark so we turned on our headlamps for the last half of the hike and carefully navigated the slippery rocks in the wash.

The following morning we drove back up to the Cedar Mesa Plateau. We climbed down into a remote side canyon to photograph a very large pictograph panel and a small but amazing granary, "The Serpentine Room," named due to the dark red pictograph remnant directly above the granary.

With many great images in our cameras we headed off to our next hike and shooting location. After a very bumpy 30-minute off-road drive, we arrived to a rocky outcropping I've hiked from several times before. We then hiked down into a giant canyon with sweeping views of the desert top plateau. The next locations would be two Anasazi ruins and pictographs, which I am leaving unnamed because these locations are very special and I want to ensure they stay unknown to ensure their survival.

Over the next 2 hours we hiked and photographed these amazing locations before returning to the lodge in Bluff for lunch. That afternoon we made a short drive up to Comb Ridge to a well-known Anasazi ruin known as Wolfman Ruin and panel. The hike to Wolfman isn't very long, but it does require traveling through some challenging ups and downs. The Wolfman ruin is small but highly photographic, with pottery shards all around.

The next morning we departed at 5am for a sunrise shoot in New Mexico at a giant rock monolith named "Shiprock." You can't miss this one! This very large, jagged rock towers over the endless desert landscape with two large rock fins that stretch into the flat, vast landscape over 2 miles long. These rock "fins" are created by nature, but it's hard to believe given they are so perfectly straight up and down, you would think they were man-made. These stone fins created a great leading line for our compositions to Shiprock itself. With some nice color in the sky we worked quickly to capture the sunrise. We also used zoom lenses for telephoto compression to increase and exaggerate Shiprock’s size in the distance.

After returning to Bluff we took a lunch break and got together for some post-processing. This gave us a chance to edit some of the images captured during the workshop and teach focus stacking, high pass sharpening and other fun and unique techniques to get the most out of the images captured.

In the late afternoon we departed for our night shoot in Valley of the Gods. The Milky Way alignment was vertical this time of year (November) so we drove to location deep in the heart of Valley of the Gods. We setup, snacked on some dinner items and waited for extreme darkness to fall. After a series of test images we had our settings dialed in and we captured the Milky Way above two different giant rock formations. We used a variety of lights to "paint" the foreground to enhance the overall look of the scene. It was really a great shoot! Temps were pretty cold but the excitement of the images we were capturing made us all forget!

Before we knew it, the time was after midnight so with cameras full of some great Milky Way imagery we packed up and headed back to Bluff for a good night sleep.

The next morning we took a short drive up a dirt road on Comb Ridge to a pretty well known Anasazi ruin called Monarch Cave. After a quick 1-mile hike we arrived at the alcove and spent the morning exploring the area. We photographed petroglyphs, pictographs, pieces of ancient pottery, petrified corncobs, and grinding stones.

We then returned to Bluff to say our good-byes as everyone was off to catch their flights home. Phil and I want to say a very big thank you to all of you that attended this SW Extreme workshop. It was a great time and we really enjoyed working with each and every one of you!

A big thank you to our guests and Mother Nature for giving us great conditions and great light for photography!

Stephen, Phil and the rest of the ApCad team!