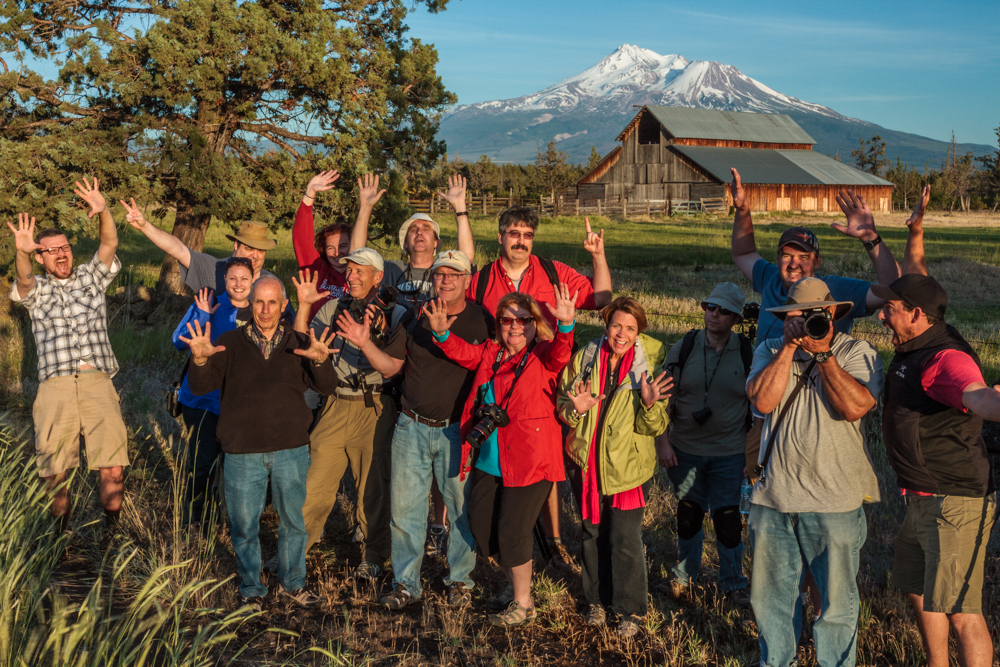 Mount Shasta has been an icon I’ve seen for my entire life. Born and raised in Northern California Mount Shasta stand like a giant visible from 100 miles away to the south. Over the course of the years, photography has taken me to some very, very amazing locations…but still one of my favorite classes each year is sharing my home turf with photographers on our Mt. Shasta workshop.

Scott Donschikowski and I met a great group of eager photographers on Friday night in Mt. Shasta to go over the schedule for the weekend as well as get to know everyone a little bit more. Scott has been teaching this class with me for three years now, and knows the spots as well as I do…he and I were both excited for this weekend’s class, as we had spent some time doing research on a couple new locations and were eager to share them with the group.

Our first morning began at 3:45am. Yes, AM. This time of year the sun rises quite early, and we need to be on our way and set up at our first location with plenty of time. Trout Lake was one of those locations, that even living in the area, took me a LONG time to find. People aren’t exactly forthcoming about their spots and it took a lot of maps, driving, and trial and error before I finally found it…and now it’s a staple of the workshop. This little lake not only has a prime view of the mountain, but it also sits in a depression far enough that the wind in the morning is not really a problem, and the reflections are pristine. Though the weather forecast called for flat blue skies, we were fortunate that the report was off slightly, and we had some nice wispy clouds in the area. 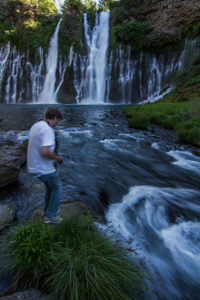 Scott and I helped everyone set up their composition, give pointers on how to frame the mountain, use the rocky shore for a foreground. Once the class had found their spots, we helped them dial in the settings for depth of field (aperture) and then getting a good shutter speed that gave the class a good histogram reading. In the early pre-sun light the exposure was quite even, and only a polarizer was really needed….as the sun began to rise the contrast between mountain and reflection in lake became more severe, and that’s when we dig out the graduated neutral density filters.

It was a great sunrise for certain everyone really came away with some nice images of the mountain.

The second stop on the tour was the quaint and beautiful Little Shasta Church. This small, white, one-room church has a great mountain back drop and it’s always a fun place to work on telephoto compression by using larger lenses to give the appearance the space between the church and the mountain is less…and the mountain looks much larger and closer.

Fifteen minutes into our shoot a cowboy strode up, and told us that there was a cattle drive going down, or UP as the case was. We had heard the clamor of cowboys yipping, and multitudes of braying cattle, but assumed it was in a field some place…not going down the middle of the road.

Having the opportunity to witness or even shoot a real cattle drive is not something you pass up. We loaded in the Aperture Academy van and set off to get in position. The cowboys and cowgirls were a little off put by a group of 15 photographers showing up in small town California to photograph them doing what they do every year…and they quickly came over to check us out…once they figured out we were just excited photographers there to see something awesome, they relaxed and went about moving hundreds of head of cattle down the road and up into the hills. It was crazy with confusion and excitement as the group of cow-people rode around keeping all the cows from doing their own thing and together as a unit. I think I speak for everyone when I say it was a great unexpected surprise that we all enjoyed seeing and shooting.

Once the cattle had been driven out of view we went back to the church to finish our shoot there…then off to an old abandoned cabin on a neat by road. The north side of Mt. Shasta is home to great pieces of Americana and homestead history, and I’ve been fortunate to have found a lot of them over my time in the area.

After a break in the hotel, we met back up and took the class up to nearby Faery Falls, a small but pretty little waterfall in a small grotto shaded by the afternoon sun. The temperatures were climbing so being by the water helped us all to cool off a little, and made for some nice photographs. Scott and I helped with polarizers, and composition here a lot as people moved about the small pool looking for the best spots. Part of running a successful workshop is knowing what you can photograph at what part of the day…and when the sun is high in the sky, and the light is harsh…having little pocket waterfalls to shoot is great!

From the falls it was a short drive up to scenic Castle Lake, a granite lined beauty of a place. We didn’t spend much time here, but just to get the reflections of the granite, and some of the great rocks along the shore made for some really pretty snap shots.

One of the icons of Grand Teton National Park is the Mormon Row barns, situated in such a place that they can be photographed along with the mighty peaks in the back. I had been looking for a spot in the Mount Shasta area for years that carried the same impact, and this year I finally found a barn that would do the trick. We lined up along the roadside to shoot this “new” barn as the evening sun lit the peak and the barn with some wonderful golden light. Scott and I helped the class get the right lens and settings to get some compression and make the mountain loom large behind this cool old barn.

While we shot one of the cowboys from the cattle drive stopped to talk with us, and the neighbor of the barn owner came over to talk with us as well. As they both put it...it’s not every day you see a van full of photographers swing by. They were both gracious and pleasant people and I enjoyed talking with them a great deal. When we run workshops, one of my goals as an instructor is not only to respect the environment we encounter, but the people who live there. That means engaging them in conversations and building relationships.

While there were no apocalyptic storm clouds on the mountain, there was amazing warmth in the light, and the class got some really tremendous shots of this new icon of the north.

Once we were finished for the day it was back to the hotel for people to eat, and sleep. We’d been in the field for over 10 hours the first day, and everyone needed some rest!

Day 2 began a little later. We went to middle McCloud Falls first. This curtain falls is one of my favorites on the McCloud River. It has so many vantage points to shoot it, that there’s plenty of space for everyone. It stays in the shade until about 9am as well…so it makes for the perfect start to another busy day of photography.

Scott and I worked with the class on exposure and composition a lot here…as well as reminding some people to adjust those white balances…even shady settings here can be a little too cool...this is where the manual ‘K’ setting can come in handy…and moving the WB up to 8000 temps to give the scene the proper warmth.

The 2nd stop of the morning was little Hedge Creek Falls…as one student put it, “The waterfall grew on me the more we shot it.” That’s been the case for everyone. That waterfall was slated for destruction when the I-5 corridor was being built, but the pleas of the locals caused the construction crews to spare this little waterfall, and now it sits as a seldom seen side trip on the side of the interstate.

This waterfall has beautiful basalt columns not found too often in this area, and there is a trail that walks behind the falls to offer viewers a different perspective. Photographically the falls are a lighter flow than the others we shoot, so it provides opportunity to really work with longer exposure to get the right aesthetic for this shot.

From a morning of falls we took a break again for lunch before meeting up to go over a few post-processing techniques. Scott has a vast knowledge on all things processing, and his tips and tricks are always well received by the class. I have my own little tricks and methods of processing images, and I enjoy sharing a little of that information with the students while I process a few of their images to show them how good they can look with a little extra work. Often photographers thing they have images that don’t really stand out, but because they shoot in RAW, those images NEED processing, and seeing how they look before and after really helps cement the importance of good processing skills.

The next stop was a drive to Burney Falls, the crown jewel of waterfalls in the North State. This 100 foot high monster spews out of the earth in hundreds of various sized streams into a cobalt blue pool. The mist is always a factor, but the location is so beautiful that everyone makes the most of it, and remembers to keep wiping those lenses!

By this point in the workshop the students are getting savvy with the settings on their cameras, so Scott and I are there to help validate their process, and offer tips on filters, and composition. Everyone got some really great shots! The fact it was a good 15 degrees cooler by the falls than in the parking lot helps too! I don’t think anyone wanted to leave.

Our final stop for the night is the Sundial Bridge in Redding California. This controversial structure has been one of the more popular landmarks in the whole region, and at twilight when the bridge is lit up, it’s a spectacular place to visit for tourists, photographers, and one billion bugs.

This spot is a good introduction for some folks into the realm of night photography, as we arrive as the twilight sky is making its appearance and the longer exposures are needed. A few people went with solid ND filters to really blur the river, and give the water a smooooooth silky look.

We couldn’t shoot for too long, the light was adding, the bugs were fierce, and the time was starting to take its toll on energy levels…it was after 9pm and we’d had two amazingly full days of photography in one of the best places in the planet…my home turf.

Brian, Scott and the rest of the Aperture Academy team