Mike and I met our group of photographers in the city of Mount Shasta for a brief orientation, so we could let everyone know what they’re in for over the course of the weekend. Our first morning shoot is quite early, so it’s time to let everyone get some sleep before we meet again pre-dawn for our drive to Trout Lake.

Trout Lake is one of the lesser known areas for photographing Mt Shasta. The fisherman all know about it, but as of today...it’s still very under visited by the tripod toting photographer crowd. We arrive to a glassy lake, and already we can see the warm light of the imminent sunrise beginning to light up the mountain. Mike and I point out a couple different areas to photograph from, and then help tend to the technical questions. It’s early, and nobody has had their coffee yet, so sometimes people forget where certain functions of their camera and lenses are located. Sunrise was really pretty and some white pelicans flew in and joined the party to give us a little something else to point our cameras toward. Once everyone had their fill of the mountain, we shot some images of various backlit foliage and had some fun with that before setting off for the rest of our morning. 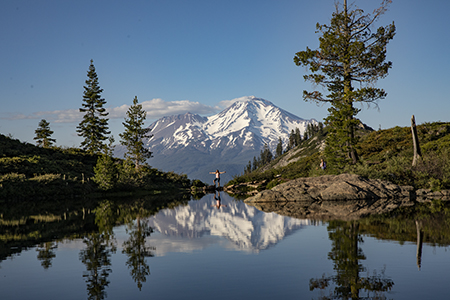 The little Shasta Valley is farm country, and there are numerous barns, abandoned houses, and old buildings to shoot here...all with a view of the mountain. We shot the little Shasta Church, and some old barns in the area. There weren’t too many clouds around the mountain, so we had the group really dial in and think about converting these images to black and white.

Our first morning was a full one, and an early one. Everyone was ready for a break. Our afternoon was focused around climbing up to Heart Lake, easily one of the best views of the mountain...This hike takes time, so after a brief stop at Lake Siskiyou to grab some shots of the mountain, we spent a good hour plus of our late afternoon hiking up to this grand vista. Everyone did great, and we all made it to the top. Once there it was time to set up the compositions and fire away. The best shots have Shasta in the back with the picturesque Castle Lake in the foreground. We started our hike at this lake, and seeing it from another 1000 feet higher really puts that huff of a hike in perspective.

Once sunset has passed, it’s time to use what’s left of the daylight to navigate our way back down to the parking lot. Everyone has really earned a full night sleep.

The following morning we start early..but not TOO early. We’re headed for the middle branch of McCloud Falls. This is one of the most lovely falls in the northstate. Thankfully, the hike isn’t very far and everyone is pretty happy about that. This curtain falls is fun to move around and shoot. There are plenty of options to be had, and Mike and I help point the group in the right direction to make the most of all the different images one can create here. 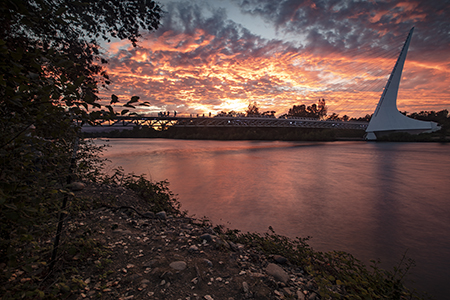 It’s back to the hotel after this shoot, and a little down time before Mike and I get into the post-processing side of things. The group has assembled quite a bunch of images in just one day...and it’s time to make them look amazing. Most people have their own methods of post-processing, but it’s always good to get some tips from the people who do it every day. I think everyone learned a little something to make their images stronger.

That afternoon we depart for Burney Falls, another of the gems of the North State. This spring fed waterfall flows like a champ all year long. It’s deep blue water is unlike any I’ve seen around. It’s absolutely stunning. The group makes a quick hike to the base of this giant fall, and works on a variety of compositions from the very wide, to the up close and intimate shots of the many different side falls that this waterfall has. A few brave souls got right down in the water and really made a killer composition. Wherever one sets up, it’s hard to get a bad shot of Burney Falls.

The final stop for the evening is the Sundial Bridge in Redding. Once a controversial purchase for the city, it now has become one of the top tourist attractions, and an icon that most people associate with Redding. Mike’s phone app called for an 85% chance of a killer sunset...and it did not disappoint. We had all kinds of color and texture in the sky, which really helped make this image POP...it was one of the best sunsets I’ve seen there, and I LIVE there!

It was the perfect way to end a fantastic weekend filled with fantastic people. We couldn’t have scripted it any better.

Brian, Mike, and the rest of the Aperture Academy team