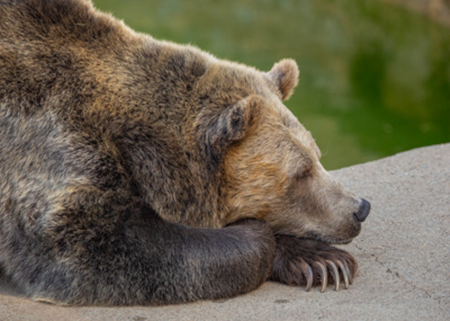 It has been a while since we have been able to host a San Francisco Zoo class so today was particularly exciting. Our group of photographers met near the front entrance of the zoo in cool weather with light fog.

After some quick introductions that included everyone’s experience in photography, we headed to the front gate. It was exciting to work with a group of photographers with such a wide variety of experience ranging from beginner to landscape to family photos to African safaris!

Our first stop was all the way to the back of the zoo because we know that around opening time is generally when the grizzly bears get their breakfast. We waited a short time while the keepers prepped the habitat by spreading the food throughout. In the adjacent area, we could watch the Bears pace about. We got some great shots of the bears and details including their huge claws.

From there, we meandered past other bears, the Mexican Wolf habitat, and then into the rainforest enclosure. In this hot and humid environment, we were able to shoot the loud macaws while we observed many other birds, lizards, snakes, and mice. Stepping out into the cool San Francisco day was a nice relief from the humidity. We headed over to the Penguins next. Perhaps the smelliest animal, but also the most active as they frolicked in the water and warmed in the sun. We were disappointed that the tiger enclosure was under construction, but we were happy to see the lions next door. A female lion stood up and stared at us as if she was posing. A stoically beautiful animal. We scoped out a river otter just before it climbed back into its potato sack for a nap and we photographed some Mandrills with beautiful colors on their faces. It was a great start to our workshop! 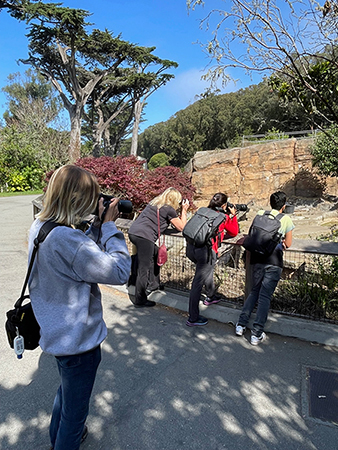 We made a brief pitstop for lunch where we continued to talk about photography and people’s experiences on safaris. After lunch we were right next to the flamingos, so we went and enjoyed their enclosure for a bit. Beautiful soft colors allowed us to get some great images that included the textures, feathers, and eyes.

From there, it was off to one of the favorite stops in the workshop, the lemurs. Often loud and always entertaining, they did not disappoint. While resting at first when we got there, we watched them wake up, investigate the area, and play with each other as they climbed trees and ropes. The ringtail lemurs were there as well and looked like cute little stuffed animals.

On the way to see the silverback gorillas, we stopped at an overlook above the Safari area. We watched with amusement, the ostrich, zebras, and giraffes. One of the things we talked about was not only to remember to try and get shots of the animal but also to look for details that many others might not see including abstract images. Close-up images of just the patterns of feathers or animal fur make for very interesting images as well. We continued around the loop and saw the silverback gorillas. The largest male is extremely impressive. Strong and clearly in charge. A couple of people even managed to capture photos of the largest male yawning, exposing his huge and intimidating teeth. We were all smiles!

We headed downhill again through the center of the Safari, shooting the birds and the other animals including more perspectives of the zebra and the giraffe. As we continued around the loop again, we decided to give the gorilla enclosure another try in case there was more action to see. We got there just in time to see the zookeepers laying out food. When the zookeepers were safely out of the area, the silverbacks were released one at a time. They all slowly meandered about their area enjoying the hidden and sometimes not-so-hidden afternoon treats. Always fun to see!

Just like that, it was already past 3 o’clock. It was a beautiful day at the zoo with like-minded photographers interested in learning and having fun. No doubt that everyone got great photos! We spent a solid 5 hours and there was still much to see and photograph. Because of this, I’m already looking forward to the next day at the zoo.

Kevin and the rest of the Aperture Academy team