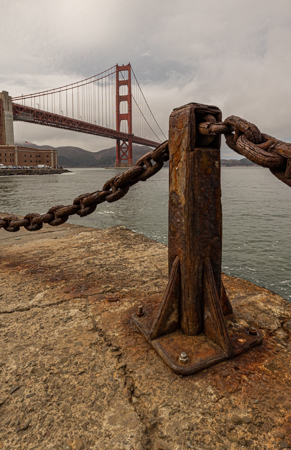 Heading into San Francisco this Saturday afternoon, the weather looked great for another fun workshop. Our small group of photographers met near the historic Battery Godfrey. We did a quick round of introductions including talking about the gear people brought, experience levels, and goals.

Among my goals was to make sure that everyone went home with pictures they would be proud to put on their walls. With the introductions out of the way, our adventure began. At Battery Godfrey, we shot several different angles of the Golden Gate Bridge including some well-known perspectives of the bridge framed by cypress trees. In addition, we had some great opportunities to capture pelicans soaring below us and hawks circling above us. It was cool and windy. The rolling fog added awesome elements to make our pictures more interesting and unique. As the light would change based on the clouds and fog, every shot was becoming slightly different.

With lots of smiles and great images already captured, it was time to move on to the next spot. Only a couple of minutes drive away is another historic location. At Fort Point, the rusting anchor chains lining the road helped create great foreground elements for the Golden Gate. The chains are so old and pitted that detailed shots of the chain can also be perfect subjects themselves. This location offers great views of kite surfers, birds, and Alcatraz Island. We were also near the bridge as we watched an enormous cruise ship exit the bay for its next port of call. There are always interesting things to see and shoot from Fort Point.

With many images captured, we headed to our cars and then off to our next location at Hawk Hill, high up in the Marin Headlands. The fog continued to roll in and partially obscured the bridge while at the same time giving us opportunities for multiple compositions that were unique and fun. Heavy fog rolled in just as we were beginning to set up to take these photos. We were still able to see the north tower and parts of Alcatraz but the rest of it disappeared mysteriously into the fog. This created a great opportunity to talk about black and white images as a scene like this could be perfect.

Unfortunately, the fog only got heavier and heavier after that. This made our sunset location at the beach a little less certain, but we were hopeful. We headed down the beautiful one-way roadway in the headlands and made our way to Rodeo Beach. After a short walk across the beach to the sea stacks, we began our wait for sunset. At Rodeo Beach, we dropped well below the fog line and we could see the horizon. There were some great cloud patterns in the sky and we could see a little bit of color. Fingers crossed that a good sunset was in our future! Alas, it was not to be. The fog bank had grown thicker to disallow any sunset view. However, we still got great shots and we were able to talk about compositions, long exposures, and HDR all while practicing on the large sea stacks as we watched waves crash in. It was a blast. We had almost the whole beach to ourselves so it was an extra special treat to be able to shoot here tonight.

When we were sure we would see no amazing sunset, we headed back to the cars again. We drove east to Sausalito with the goal of shooting the bridge from a couple of different vantage points and hopefully staying below the fog line. This vantage point proved to be incredible tonight. A light fog was drifting through, the wind was minimal and there were a few people. We were able to move to a couple of different vantage points and watch the fog and the bridge. The fog was light enough that we also had a beautiful view of the San Francisco skyline. We created images that included the skyline, the Golden Gate Bridge, and even the Bay Bridge. Suddenly, it was nearly 9 o’clock and our workshop was ending. Everyone had long drives ahead and decided to hit the road. We all had a great time and I feel confident that everyone created images they will be proud of for years to come.