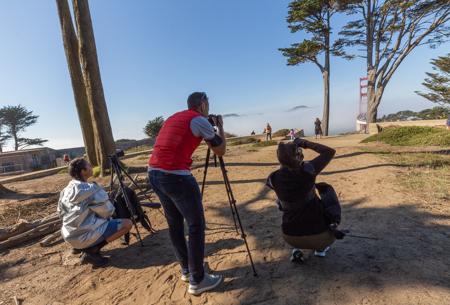 Our adventurous group of photographers met in San Francisco this afternoon at Battery Godfrey, a historic military location, that provides some stunning views of the Marin Headlands, the Pacific Ocean and the Golden Gate Bridge.

When we arrived, so did the fog. We were completely socked in and growing concerned that we may not be able to do any shooting here. Knowing how unpredictable San Francisco weather can be, we waited just a few minutes and the bridge tower emerged from the fog. Slowly, the entire bridge became visible.

Capitalizing on our good fortune, everyone got some great shots of the bridge plus some of the passing cargo ships and other sea traffic framed by large Cypress trees. Not knowing what the fog was going to do next, we packed up to move onto our next spot. Just a couple minutes away, we landed at Fort point. The rusting anchor chains that line the road make great foreground elements in front of the bridge. They make great subjects of shots of themselves as well. We moved along the seawall not only capturing the bridge and the fog rolling in, but just in time to watch the sun set through the fog and iron girders of the bridge. There were some very impressive sun rays blasting through the structure that were amplified by the rolling fog. Shooting this area was also a great spot to discuss the use of filters and practice with them to see how they can affect an image. There were lots of smiles and grins as people peeked at their LCD screens. 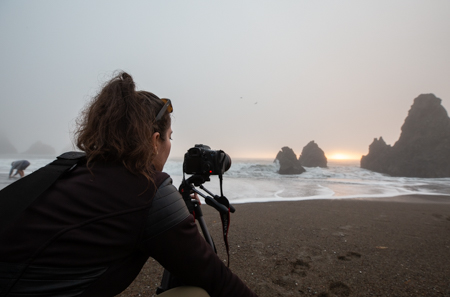 As sunset was now only an hour away, we altered our plan for the night to make sure we got to Fort Cronkhite on time. We headed through the Marin Headlands out to the ocean. The drive to Rodeo Beach was ominous for weather. Super thick fog followed by patches of clear blue sky. Arriving at the beach parking area, we did not know what to expect as heavy fog remained. Nonetheless, we are all eager to see how it would go. Once we were gathered again, we took a nice stroll along the beach to get to the two large sea stacks.

The fog was heavy though the sun was slightly visible at times. As we waited, the sun was heavily eclipsed by the fog and we began to resign ourselves to not seeing a sunset. Our great weather luck then changed again. The sun dropped lower allowing it to be visible through the fog just above the horizon, creating a beautiful yellow sheen on the water. After the sunset, all the fog then cleared out and we were treated to beautifully colored skies. Everyone continued to shoot the colors and the water, while practicing long exposure techniques. This was proof again that patience is a virtue. Smiles were all around as everyone surveyed the beautiful scene around us. 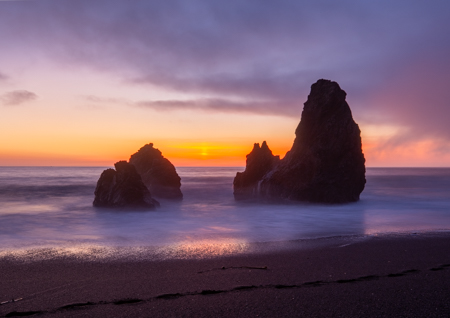 At our next stop, the fog proved to be a problem again, so we quickly altered course and caravanned to another great vantage point. On the Sausalito side of the Golden Gate Bridge, we initially had a hard time seeing the bridge due to the fog. Once again, with just a few minutes of waiting, the bridge began to reveal itself. With long exposures we were able to capture striking and dramatic images of the fog wafting through the bridge. The golden lights, the rolling fog and reflections made for some incredible images!

I told everyone at the start of the workshop that my goal was that each of them go home with images that they would be proud to put on their walls. Based on peeking at their LCD screens, I have no doubt all of them succeeded in this. It was a bit of a wild ride with the fog not knowing what to expect today, but the fog worked to our benefit, and we had an incredible evening of photography.

Looking forward to seeing everyone again in future workshops.