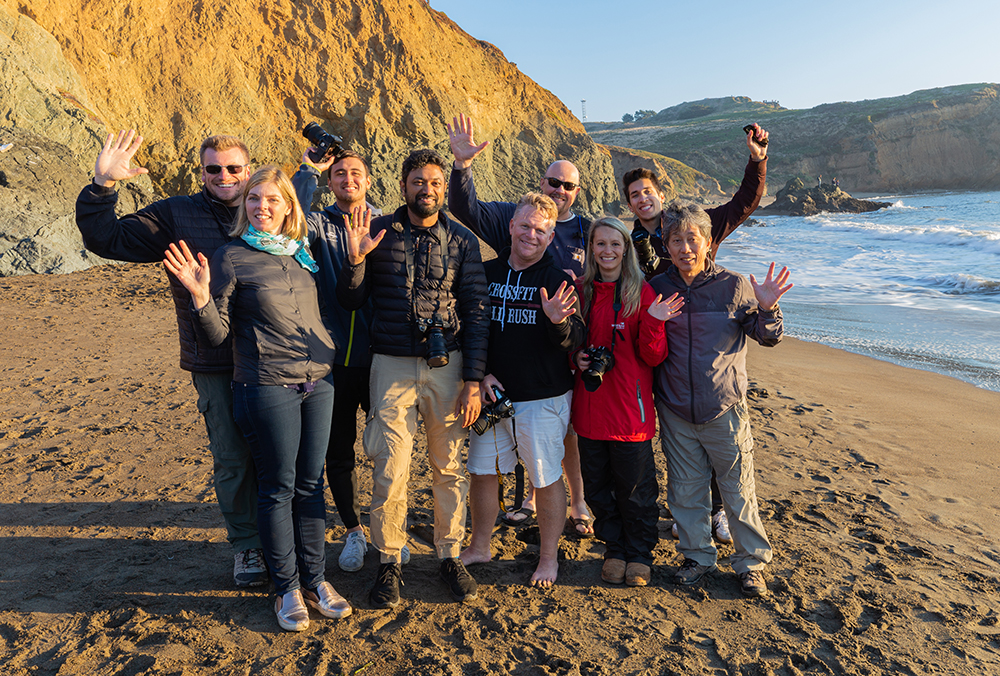 Before our group met, Stephen and I were watching heavy fog roll into the bay, unsure how it would potentially effect this afternoons workshop. While we always hope for some fog, Mother Nature is ever unpredictable. But we always have plan B, C, and D in our back pocket! At noon, our group of eight eager photographers joined us in Sausalito. Following a brief round of introductions and talking about the itinerary for the afternoon, we loaded up in "ApCab" and away we went.

As we approached the Golden Gate Bridge, the weather was sporadically clear or completely enveloped by fog. As we arrived to our first planned stop at Battery Godfrey, the bridge was not visible in the heavy fog. We elected to head back north across the bridge to the Vista Point. Enter plan B. Leaving our tripods behind, we walked out onto the bridge as the heavy fog cleared just enough to allow for dramatic and abstract images of the bridge and cables. We spent some time showing the students some ideas to help find unique perspectives and angles. The beauty of the sunlight blasting through fog and the North Tower was amazing. Students in our group were grinning ear to ear as they looked at the results on their screens.

From there, we loaded back up and headed back across the bridge to give Battery Godfrey another try. It remained socked in, so we decided to be patient and wait. After a few peek-a-boo moments of seeing the bridge, it remained shrouded in fog. Stephen declared a 10 minute warning, saying that we would leave to an alternate location if the fog didn't clear. With only 3 minutes to go, it was like magic! Almost all the fog cleared providing an incredible view of the majestic bridge as sailboats bobbed in the water underneath. Students captured great images with various compositions of the scene, happy that we had waited it out! We then moved only 100 feet away for a whole new bridge perspective. Several students put on neutral density filters and we talked about long exposure shots in the daytime and the great effects that can be achieved. 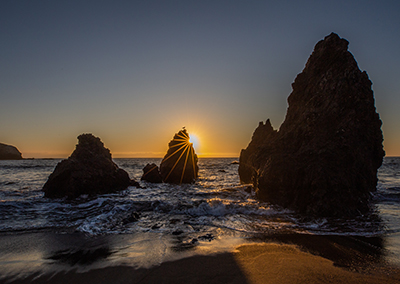 As sunset was quickly approaching, the group elected to skip a meal stop and head straight for Rodeo Beach. After a short walk along the beautiful sandy beach, we arrived at several large sea stacks. We talked about long exposures for motion blur, fast exposures for freezing the crashing waves and the use of filters. Students fanned out around the area, each finding shots and perspectives appealing to them and got to work. Despite having no clouds in the sky, we all admired the beauty of the scene as the sun dropped behind a thick fog bank and disappeared.

Not wanting to lose any opportunity to capture shots of the entire span of the Golden Gate Bridge, we all quickly packed up and headed back to the van. High on the hill we found a spot with a great view and no crowds. The students all captured some great blue hour shots of the bridge. As the skies darkened, the shutter speeds lengthened, students began to see light trails from cars as a nearly full moon made its way into many of the photographs. Everyone was excited to culminate the day with these iconic bridge images.

After everyone wrapped up, thrilled with what they captured, we headed back to the van and started heading back to Sausalito.