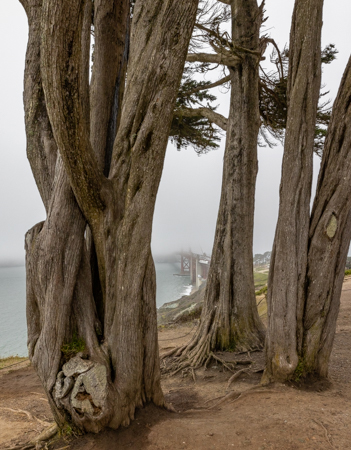 Our group of photographers met at the historic Battery Godfrey, with a beautiful view of the Pacific Ocean and the Golden Gate bridge. We all gathered and did quick introductions and a rundown of the fun evening ahead of us. We had a number of places planned in San Francisco and Marin where we could capture great images. Our initial meeting was also a good time to learn the goals of everyone and what they hope to get out of the class.

With our beginning tasks accomplished, our adventure began. As we were already at Battery Godfrey, no driving was required. We spent time at two different vantage points here, both providing iconic views of the Golden Gate Bridge framed with large cypress trees. This location also offers great views of soaring pelicans, birds of prey, and passing cargo ships. We discussed compositions and camera settings, plus how filters can be used during daytime conditions. We had super thick fog and lots of wind but we were also able to create some great images. Lots of laughs and smiles for the group helped make the wind feel less chilly.

As we prepared for our next stop, we were excited to shoot at Fort Point. At the fort under the Golden Gate Bridge, we created lots of images as the waves crashed and the fog rolled. The rusting anchor chains lining the roadway are great foreground elements. They also make great photography subjects themselves with detailed shots of the rusting and pitting of the large links. We walked our way along the water‘s edge all the way up to Fort Point where we were treated to loads of pelicans, many sea birds, more great views, and even a curious seal.

We regrouped again and headed back to our cars where no doubt everybody turned on their seat warmers and the heaters. Our next stop was Hawk Hill, high up in the Marin Headlands. 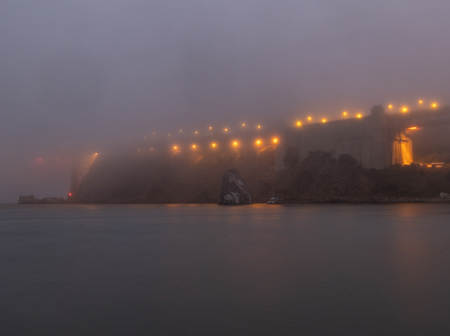 We drove north across the Golden Gate Bridge through the fog hoping to climb higher than the fog line. Unfortunately, views from Hawk Hill were nonexistent though we could hear the foghorns of the shipping traffic. While waiting to see if any of the fog would clear, we did a quick hike around the area, including through one of the tunnels and up to a bunker on the top of the hill. Alas, we were not going to have any fortune to have the fog clear. It continued to be super thick, along with the heavy wind. We gathered again and headed down to Sausalito. Earlier in the day, it looked as though the sun might’ve been breaking through the fog in Sausalito so we wanted to give that a try to maximize our workshop time.

From the Sausalito side of the Golden Gate bridge, we explored three unique and impressive vantage points. As great as they were, the heavy fog kept foiling our plans. We were able to talk about long exposure and work and practice with it but the bridge barely revealed herself.

Eventually, the bridge lights turned on, though they were heavily obscured and much of it was never visible due to the thick fog. We continued to laugh about it and enjoy the experience despite some of the shivering wins. With heavy dew, heavy winds, and heavy fog in our San Francisco summer, our workshop was ending. While we didn’t get the amazing sunset or bridge shots we hoped for, we were able to learn a lot about photography from each other. We all got some great practice and most certainly created some great images. After everyone said goodbye, the car heaters were turned on once again and everyone began their drive home.

As unpredictable as SF weather can be, it is always fun to be with like-minded photographers laughing and shooting. This workshop was a perfect reminder that photography can be challenging and Mother Nature doesn't always cooperate. Sometimes to get that perfect shot you envision, you'll need to return to any given location a few times!