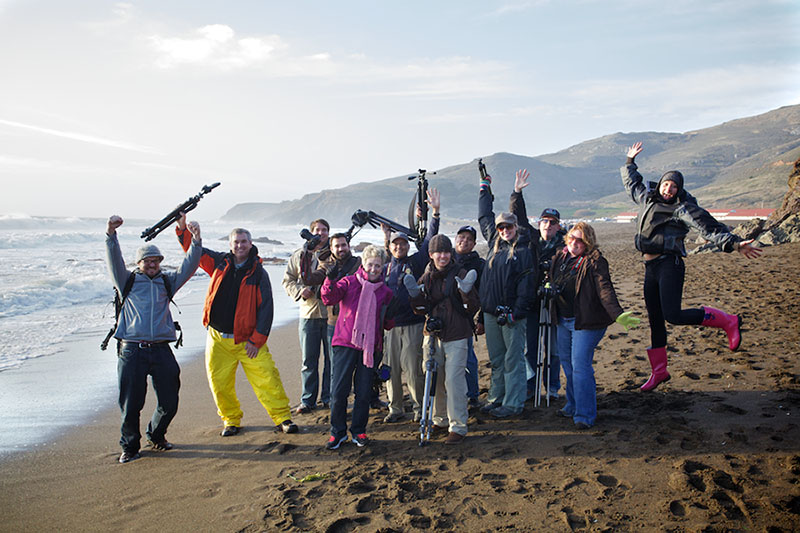 When the weather forecast calls for rain, and no rain shows up, it feels like you've cheated the system and gained a bonus day. It's exhilarating, and each moment feels like, "I'm not supposed to be seeing this right now!" Weather forecasts in San Francisco for Saturday said a 40% chance of rain...and even though there were patches of blue in the sky, grey clouds lingered throughout view, and given the downpour that occurred the previous night, it was a safe bet that at some point Saturday's weather was going to go south.

When our class met at Baker Beach, the first few drops of rain began to fall... the outlook wasn't great, but thankfully it stopped and we were able to begin the orientation on schedule, and with the sun beginning to shine, too. 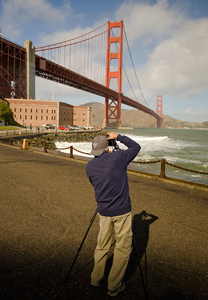 Our orientation gave everyone a chance to get to know each another and our instructors, Brian Rueb and Alicia Telfer, who got the chance to find out what the students' experience levels were and what they wanted to focus on during the day. Students come to us with a variety of skill levels and equipment, and it's always fun to learn where everyone is at in their photographic journey, and then work towards moving them to the next levels.

Normally we try to start on Baker Beach, but even though the rain had stopped, a steady wind was blowing and we made a change in the plan to put us in a position to still get nice photos without the blowing sand. So we made our first stop at the outskirts of Fort Point, where we had a wide angle shot of the bridge and the fort, along with a view of the really old rusted chains that line the edge separating the road from the churning sea. 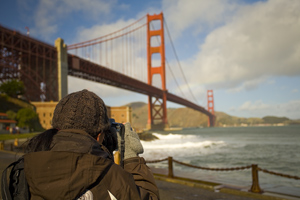 This spot offers the opportunity for teaching a lot of different techniques. The first, don't turn your back on the ocean, ever, was learned quite quickly by a few of the students.

This location is great in that it provides a nice wall for the waves to crash against, which sends ocean spray high into the air and onto the roadway. A few students got a kiss from the sea as they got out of the van and set up to shoot. So once everyone had safely assembled back from the spray, we began the lessons.

We worked with students to bump up ISO to allow for faster shutter speeds in order to capture a wave crash in action. Using this technique, we got great shots of the Golden Gate Bridge, Fort Point, and a wave crashing through the air... giving us a new and exciting version of a classic San Francisco scene.

We also worked with students on how to get a shallow depth of field to focus on the part of the old rusted chain, while leaving the iconic Golden Gate blurred in the background; this gives the image a sense of place while shifting the focus. The class had fun trying to go near and far from the water and grab a shot or two before the waves crashed back in and sent them scattering. The chains also provided a very nice "leading line" in compositions that helped guide the viewer's eye through the image from foreground to background. 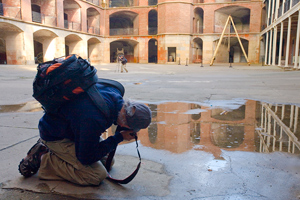 When we finished with this vantage point, it was time to drive 50 yards to the actual Fort Point and set up for our second stop. Fort Point is a great civil war era brick fort. We entered the fort through the main gate and then broke into two smaller groups. Brian and Alicia each took a group through the fort and showed them a few of their favorite spots for teaching some valuable lessons.

One of the spots we visit at the Fort is the Powder room. The small, dimly lit room is filled with row after row of old replica gun powder barrels. It's a good spot to work on a lot of different photographic techniques, the first being the use of repetitive shape in images. Repetitive shapes are great for composition. They add interest and allow for compositions that fill the frame with the same colors and shapes. 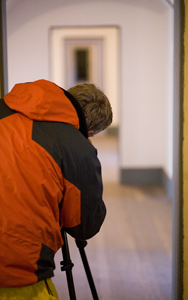 We also worked with how to fill a frame with very symmetrical objects and where you cut them and place them in a frame, and how to use the lines on the floor and shelves to help guide a viewers' eye through the frame. This spot is also prime for working on very shallow depths of field where the student focuses using the lowest f-stop, and then allows the rest of the image to blur, further adding focus to the spots selected in the image.

We typically spend about 30 minutes maneuvering the mini maze of the Powder room before we head upstairs to the officer's quarters. This area is a long hallway filled with doorways that seem to go on forever. It's a great way, again, to work on symmetry in an image and on how to photograph it and change it up. We also cover white balance in this room - the lighting is quite different in that it's filled with natural light from the windows as well as artificial light from the bulbs in the rooms. It's fun to see how the light changes when we play around with the settings. Sometimes we also have a bit of fun creating ghosts in our images by standing still for the first two seconds of the exposure then moving out of the way the last two seconds. 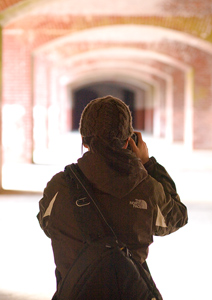 The final spot we show the class in the fort is the old brick-lined archways in the far wing. These archways give more examples of symmetry with the added bonus of being able to show how a graduated neutral density filter can be useful. The arches are all lit by natural light, which streams in from the left side of the frame and creates a much brighter section that is often blown out in images. We can use the filter here, turned sideways to help balance the exposure and give a more pleasing overall appearance.

Once the instructors have covered these first areas, we turn the class loose to go explore and find their own unique visions. While they explore, Alicia and Brian go to each student and help provide tips and pointers. Towards the end of this exploration period, the class got down to ground level to capture some great reflections in the puddles that were left behind in the courtyard area from the previous night's rain. It was a new perspective on the area, which gave an almost surreal quality to the images. 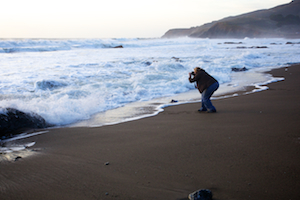 Our time at the fort ended, and the sky was still behaving wonderfully, so we pressed on to Sausalito to have lunch and take a break before we headed out to Rodeo Beach to work on capturing a sunset.

The storm system had put a high surf advisory in effect for the entire weekend, and it was not clear whether we would be able to get out to our usual location for sunset. But, like the weather forecast for the day, the high surf warning was a bit off as well, and we were lucky to not only be able to walk out to the lovely sea stacks and rocky shoreline, but actually have plenty of room for the class to spread out and set up their own shots.

The beach is a great spot to help people see the value of a polarizer and graduated neutral density filter on an image with high contrasting light like a sunset or sunrise. The filter helps hold back several stops of light from the bright sky, while allowing the foreground and beach more exposure, which creates a pleasing and evenly exposed image. The lower the sun drops, the longer the exposures get, and the more we see students start to light up as they see the nice silky smooth water images they are getting on their cameras. Even though the sky never lit up electric pink or purple, we had some really nice warm tones to work with, and it was certainly a pleasant sight to behold.

Everyone got some nice images and was happy the rain had held off and we were going to be able to make one last stop - the high vantage point of the Golden Gate Bridge, from the top of the Marin Headlands.

While this class is not a specific class geared towards night photography, the view is too good to pass up, and we always make the stop and work with the class to get an image of this iconic shot. We work up the f-stops, add long exposures and play with white balances to cool down the artificial city lights and make very nice night shots of the bridge. For those who didn't have cable releases or remote controls for their cameras, we notched up the ISO to make the sensor more receptive to light, and then set them for 30 second exposures that still yielded very similar results.

The forecast had said there would be a storm in the area, which meant that we shouldn't even be seeing the bridge... but we did, and that's what made it so beautiful. The forecast was wrong.

Brian, Alicia, and the rest of The Aperture Academy Team

NOTE: You can see more workshop photos below the comments here.