What better place to do a panoramic workshop than the wide, sweeping vistas of Arches and Canyonlands National Parks.

Stephen, Mike and I kicked off the three day course with an introduction to acquaint ourselves with each other. The students shared a little bit about themselves and what their expectations were for the next few days. From there we went into a powerpoint presentation that went over the basics of Panoramic Photography and some of the problems that we might run into.

Once everyone was starting to understand the concept we went through and found the no parallax point of everyone's lens and marked each one. This way when we got out into the field later that day everyone would be dialed in. Once we figured this out for each student we took a short break before departing into the park.

Once entering Arches National Park our first stop was at the Windows Area. We spied a few climbers on some of the sandstone pillars and decided to take a few shots. Since the climbers were wearing bright clothing they stood out and added a great element of scale to the scene. As we headed out to our sunset location we noticed the almost full moon was rising up behind the distant arches. Since everyone was already set up they were able to catch the scene with the moon rising into the scene. 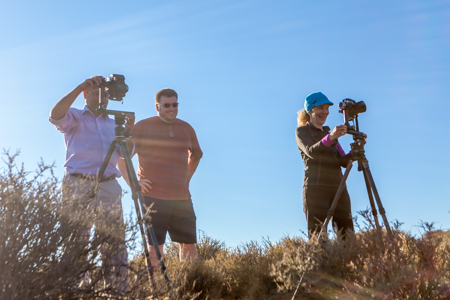 After sunset we headed in for the night.

The next morning we headed back into Arches just after sunrise to photograph the Courthouse area with some nice even light. We parked high up above the towers so that we were not looking up at them, giving the students less possibility of distortion. From here we headed over to balanced rock as we waited for the light to get better in another area. We spent about an hour at balanced rock before heading over to Park Avenue where we set everyone up for some multi-row pano's.

Mike, Stephen and I checked in with the students to make sure that they were panning correctly and that they had all of their settings correct. After finishing up at Park Avenue and everyone was satisfied we headed back down to Moab for a little break. On our way we stopped in at the visitor's center to watch the very informative, 20 minute park video.

After taking a few hours to recharge our batteries we headed into Canyonlands for our last shoot. Our first stop was at Shafer Canyon Overlook. Located on the Island in the Sky section of Canyonlands. The view here is magnificent. It overlooks a massive red rock canyon with the La Sal Mountains in the background. Here the students practiced doing three row pano's with their super-telephotos. After everyone had done about 3 or 4 passes we packed them up and headed out to our sunset location, Green River Overlook. 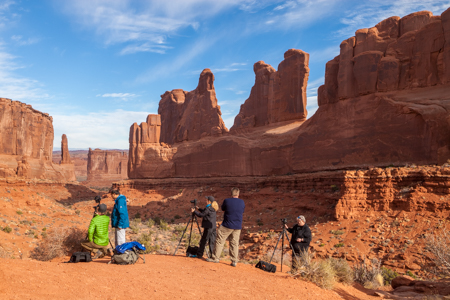 The Green River Overlooks a large section of the Green River Canyon from over 2,000 feet above. The view is absolutely breathtaking and takes some nerve, just to stand near the edge. A perfect place for panoramic photography. Just after sunset the light evened out nicely and the students were able to capture a few rows before it got dark.

The next morning we met the group and helped them get all of their photos downloaded. After everything was organized we brought the photos into photoshop to stitch them together. After a few hours of pixel burning fun we decided to call it quits and rest up for future endeavors.