The Rolling Americana of Palouse Photography Workshop | May 26, 2018

The Rolling Americana of Palouse Photography Workshop - May 26th, 2018 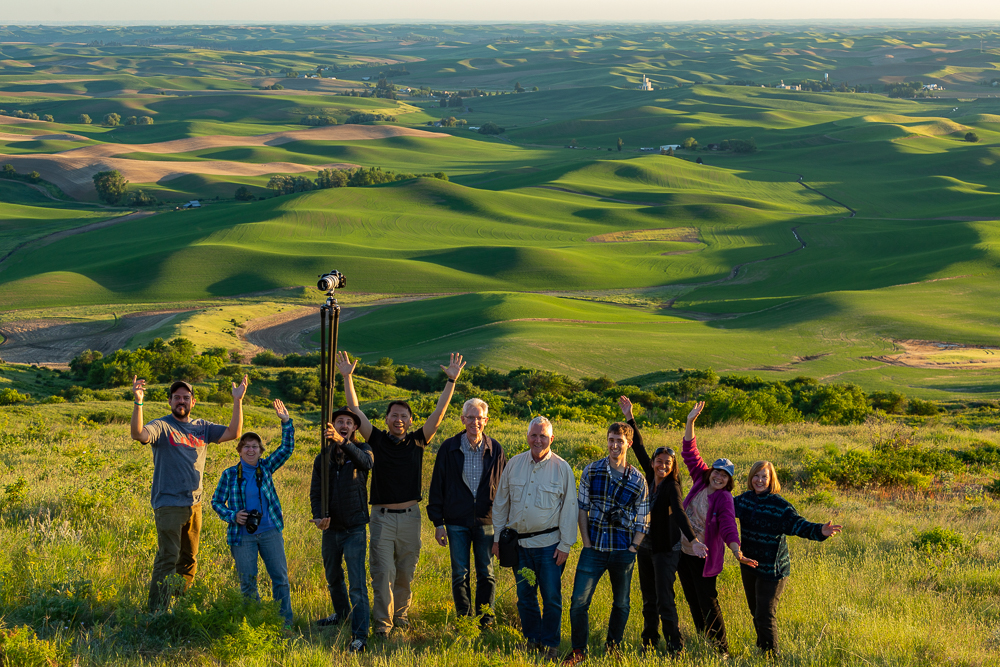 Photographers are often attracted to odd places, but I guess that depends on where you're from. As a born and raised city-person, I grew up around a large city and its suburbs, with all the urban sprawl reducing the open space of the countryside. So naturally, when I see the open space of the country I get excited as its something that Im not accustomed to seeing on a daily basis. The same might be said of someone who lived in the country and had never been exposed to city life. The Palouse region of eastern Washington is one of those places where photographers flock, but I get the feeling that the locals always wonder "why?" To us, its a beautiful open expanse of rolling hills and neatly organized patches of differing crops. But if you lived there, would you think the same thing? Regardless, the appeal of the area is definite, and old barns, abandoned townsites, and rolling fields of green, brown, and yellow, are a fascinating sight for those of us more familiar with urban environments. Regardless, the Palouse is still beautiful, no matter where you're from. And every year, we at the Aperture Academy like to share in experience of photographing the region with a handful of lucky souls. So, in the sleepy town of Colfax, we met with our prospective group of photographers and Mike Wardynski and I greeted them and had our customary orientation. The weather was looking fantastic, so we decided to get things started early and invited everyone to come out and shoot sunset with us up at Steptoe Butte. We were amazed to find that everyone joined, and we made the short trek up to the lookouts and took in the sunset, which was amazing! 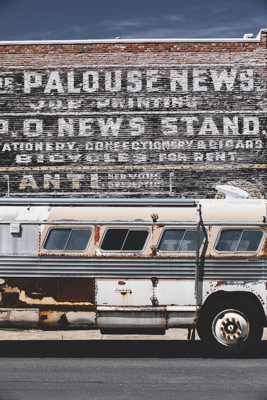 Ahh summer, when sunrise is definitely too early and its always a struggle to wake up. But hey, we got stuff to see! So we took everyone back up to Steptoe Butte for the best seat in the house for sunrise. The butte sits around 1000 feet above the surrounding landscape and provides up with a 360 degree view of nearly the entire Palouse region. The clouds that had been so perfectly placed at sunset the night before had multiplied in number and we had no bright rays of light pouring over the hills, so we decided to leave the butte and go head to an old abandoned townsite nearby. The cloudy weather was perfect for this area, as we would be shooting underneath trees and the harsh light from the sun was obscured, giving every shot we took a nice even contrast. After shooting there for a while, we returned to the hotel and got some breakfast before heading out again to take advantage of the clouds before they disappeared. As we were diving around, Mike and I remembered an old blue pickup truck that had been placed in a field not too far from the hotel, and as luck would have it the clouds behind it were awesome, so we stopped and let everyone work the scene, before moving on to a field of canola. The bright yellow flowers of the canola plants all huddled together in a huge field is an amazing sight. The way the yellow gently moves up and down the hillsides, contrasting with the blue sky, makes for some great imagery!

In the afternoon we headed out and followed the weather (read=clouds) to probably the most photographed tree in the area. Flanked on either side by hills, this lone green tree is the perfect subject, especially when theres something white and puffy behind it, lucky us! From there we drove into Idaho, stopping along the way to shoot another famous attraction, the T.A. Leonard barn, which is one of only a few round barns still standing. We were heading into Idaho to take a look at another unique barn, when we found another group there already, which is quite odd, (in the six years we've been teaching this workshop, we have never run into another workshop out in the field) so instead of doubling up on the sight, we went to another nearby attraction, the Lewiston Grade. Most people don't realize that the Palouse sits at an elevation above 2000 feet. The Lewiston Grade showed everyone just how high we really were, by being able to see a panoramic view of the Snake river valley 2000 feet below us. With the clouds constantly moving around, it was getting difficult to pin down the best spot for our sunset, so at the last minute we ditched our original plans stopped to shoot the Palouse Country barn for sunset. It turned out to be the right decision as the color right above the barn was phenomenal! 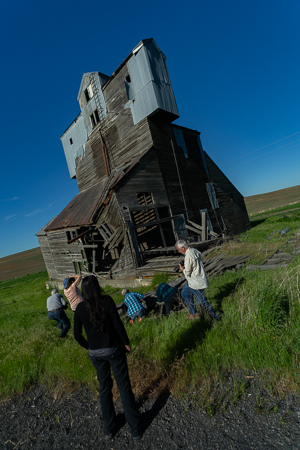 We woke up super early again and headed out to Steptoe Butte to try and catch the first light on the hills. We didn't get that lucky, as the sun was slightly obscured, but we did get some phenomenal color on the horizon, which was an unexpected surprise! Shortly after, we headed a little further up the butte and stopped to shoot the hill country with the side light that the sun was displaying. These are the shots that the Palouse is famous for producing. The light and shadow playing off of every hill and valley, the wild contrast and randomness in nearly every direction. We were making some progress now. After breakfast at the hotel, we took everyone over to a big wind farm area and used the wind turbines and the green fields to make some pretty cool panoramas. There is an abandoned house near there that also is a panoramic spot so we stopped there too before heading into the town of Palouse to walk around the town center a bit. Someone has parked an amazing looking old-school 1950's era bus in town, and the group got really excited and we spent nearly an hour photographing it. From there we headed to an old decrepit schoolhouse, just barely hanging on. I think the structure is leaning about 20 degrees, its currently propped up with a couple truck chassis. Its pretty cool to see the arrested decay the locals leave some of their older building in. In the afternoon we photographed another decrepit and abandoned building. This time it was a very aged wooden grain silo. The abstracts one can shoot here are aplenty. Mike and I had the group try all number of things, especially with superwide lenses, so the distortion was extreme and we could get very close to accentuate it. We went back into Idaho next, to shoot the barn where the other group had been the previous afternoon. There are actually two pretty cool barns on that road, so after we shot one, we headed over the hill and worked the other. After that, we made our way back up to Steptoe Butte for sunset, and caught the light from the opposite direction as the morning. Sunset was lackluster compared to the other evenings, but no clouds means that one can work with the directional light for a longer time, honing those composition skills. 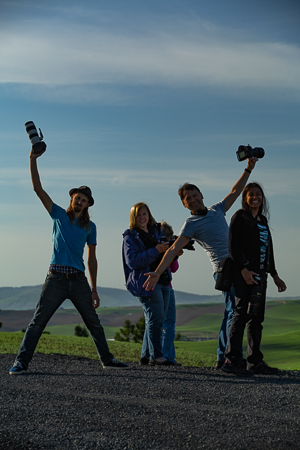 Man theres three days to this workshop? Another early rise up to Steptoe Butte, this time Mike and I made it optional, as usually on this workshop we give everyone a break for one sunrise. But again to our amazement, nearly everyone joined in for FOMO (Fear Of Missing Out). Its a real thing, look it up! Finally the weather we were waiting on showed up and we had no clouds in the sky, which really allowed us to hone in and work the hillside shots to their fullest potential. After breakfast at the hotel, we headed out on a short little trip to round out the morning. We stopped at the truck barn, which the owners periodically swap an old flatbed truck in front of the property. This year it was an orange one. From there we headed over to grab some photos of an old windmill, one of the quintessential ones that you think of when someone says "farm." I guess they were originally installed as water pumps, but now they dot the landscape in droves, some missing blades, some in seemingly perfect working order. We found another canola field which had just sprouted its flowers, which was a pretty cool sight, because we had driven by the sight only a couple days before and found nothing but green, but on this day, the hillsides were bright yellow, which is always cool to see.

In the afternoon we sat down for a couple hours of post processing at the hotel. Mike and I gave the group insights into our workflow, and used Lightroom and Photoshop to show the potential with some of the shots we had taken in the preceding days. After that, it was on to our last shoot on the workshop. Palouse Falls. I never get tired of it. Its such an amazing place not only to photograph, but just to enjoy and walk around. The enormity of the Palouse river canyon below the vistas are awesome, and we got there early so our group could get a feel for how they wanted to shoot it. Also the marmot population at the park was a sight unto itself, and we played with shooting them as well. As the magic hour approached, we gathered everyone atop the cliffs overlooking the falls, and helped everyone setup before the light dissipated. Theres something pretty cool about being able to stand -with an unobstructed view - over 200 feet above the river looking down into a canyon with a massive waterfall and rotating pool below. Mike and helped everyone (who was able to withstand the heights) get some awesome pictures of the falls, before the light completely faded. And the best part was that we were the only ones there! What a awesome end to another awesome workshop. We spent the ride home chatting about photography, and reminiscing about the past couple days. I think everyone was looking forward to sleeping in for once!