The Rolling Americana of Palouse Photography Workshop | May 27, 2017

The Rolling Americana of Palouse Photography Workshop - May 27th, 2017 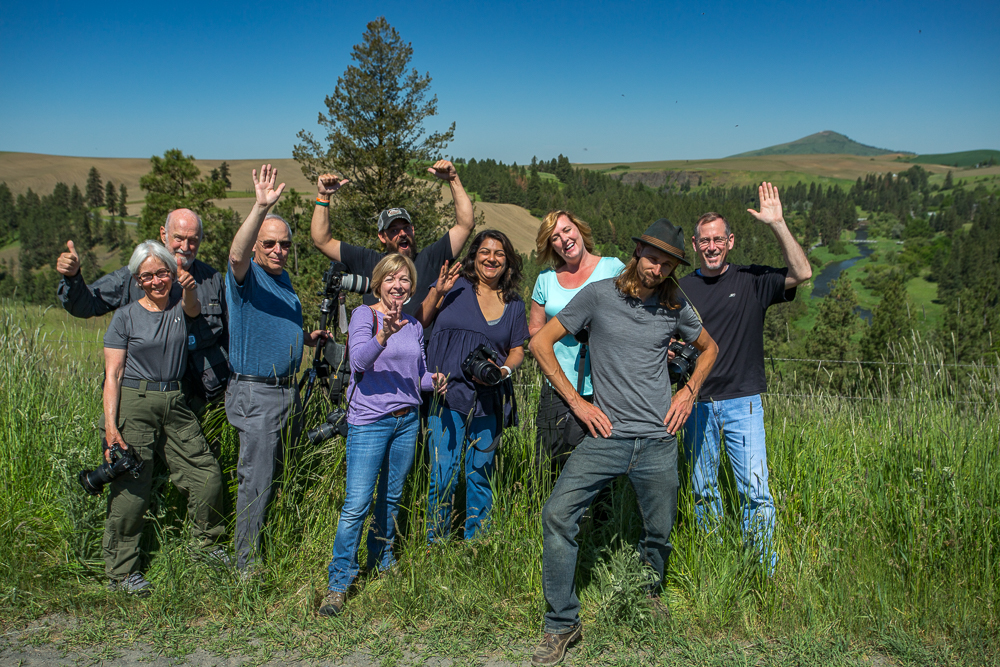 I keep thinking everytime we head out to eastern Washington's Palouse, that the locals must think we're crazy. Why on earth would anybody want to come all the way out here to photograph farmland and old barns? And the answer is, because its absolutely beautiful. The Palouse gets its name from the French word pelouse, meaning "land with with short and thick grass." But what that meaning fails to mention is the outstanding geography of the region. The rolling hills, which encompass an area of 19,000 square miles, are essentially dunes of fertile soil, wind blown from the last ice age. From high atop Steptoe Butte, one can see for miles in every direction, a sea of these fertile dunes that seemingly never end. Its a sight that never gets old. In the early summer, these dunes are planted mostly with a crop of wheat, making the undulating hills a sea of mixed green leading into the blue sky. And every year around memorial day, we bring a group of photographers to take in the sights of this American Farm Paradise. Mike Wardynski was my right hand for this three day adventure, and we met up with everyone in Pullman, Washington, where we had our orientation as we explained the details of the workshop. 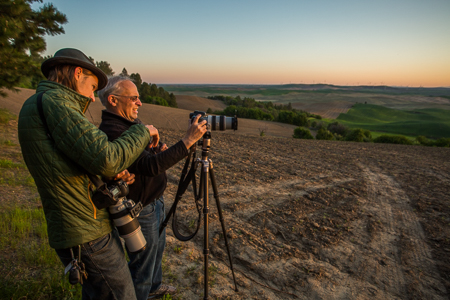 In the summer, dawn comes pretty damn early. And the best vantage point for everyone to see what the Palouse is all about, is atop Steptoe Butte. A towering quartzite island, 1000 feet above the countryside below, provides the perfect 360 degree viewing platform for nearly the entirety of the region. We drove up the winding road and stopped at a small pullout for sunrise. As the sun crept over the mountains in the west, a brilliant glow of orange light cascaded over the hillsides, and created light and shadow before our eyes. Using telephoto lenses, we zoomed in on the folding hills and picked out little scenes to concentrate on. As the sun got higher, we drove up the road and stopped at a couple different spots to follow the light show beneath us, all the while using our long lenses to pick out those little perfect vignettes that dotted the countryside. After a short break in Colfax for some coffee, we headed over to a wind farm and worked some spots close to the massive generators, using the green wheat as a foreground. We made our way around shooting some abandoned barns and houses, before stopping a small grove of trees, to perfectly planted to be anything other than a wind break. We spent some time there working the grove before returning to Pullman for a midday break.

In the afternoon we quickly spotted a crop duster heading back to a local airport so headed over and parked nearby in the hopes that he was re-fueling for another run. To our surprise two crop dusters landed and within a couple minutes, both took off right in front of us as we snapped away. From there we headed to a car graveyard to shoot some old trucks and then we backtracked towards Steptoe Butte shooting things along the way, an old windmill up on a hill, a lone tree in a field of spring wheat. Once atop Steptoe Butte, we setup very much like we had done in the morning but this time the light would look a lot warmer at sunset. Mike and I helped everyone with their telephotos, and some even broke the mold and grabbed their wide angles, so helped set them up on the sloped hillside to grab some shots of the sunset with the abundant lupine wildflowers. After our drive back to the hotel everyone was eager to get some rest after a long day one! 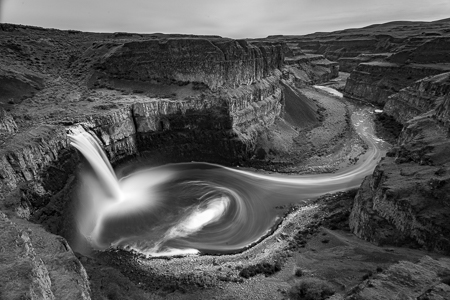 Our second morning we woke just as early as the last, and headed back up to Steptoe Butte. Today we focused on a small tree with the rolling hills as a backdrop for sunrise. Some of the wild flowers were still in bloom and while the sun lit up the horizon, Mike and I helped everyone to find interesting little scenes using the tree and flowers while we had the good light before sun rose over the western mountains. After that, we headed a little further up the hill and stopped again so folks could use their telephoto lenses to pick out little compositions of the countryside to really hone in on and make interesting images with the rolling hills under light and shadow. We headed into Colfax again for a short coffee break to re energize before heading out to a local barn with a old truck parked out front. This red barn and silver silo is probably one of the most photographed barns in the Palouse. The owners always keep the property immaculately maintained, and the hills behind it this year were planted with a crop of spring wheat. We spent some time there shooting the barn and orange truck, we did some road shots with the rolling hills and the sun, and then we headed west for a special treat. On our journey we passed by the small airstrip in Dusty where a really cool orange crop duster landed in preparation to re-fuel and take off again. We captured him as he took off and flew around us seemingly to say "hello there." From there we went on to the special treat, canola. The flowing fields in the Palouse region are fantastic on their own, but if theres one thing that can up the ante, its a field of canola. The bright yellow flowers beauty in numbers is only equaled by their sweet summer scent. And the silver barn smack dab in the middle sure helped to anchor our shots. After a long morning, we headed back to Pullman for our afternoon break. After lunch, the plan was to head out to Palouse falls, but we made a couple stops along the way. The Manning covered bridge over the Palouse river was a highlight for sure, as well as the most photographed tree in the Palouse. A seemingly perfectly placed tree right in a valley between two large hills. After working the tree for little bit, we packed up and headed for the waterfall. Palouse falls is a giant 198 foot waterfall with a sprawling gorge thats completely open to the elements. As one stands on the precipice about fifty feet above the falls, the entire Palouse river gorge is plainly visible and the sheer walls of the basalt cliffs are an impressive sight to behold. Even for Memorial Day weekend, the park wasnt terribly packed, and including our group, there were only a handful of photographers on site for sunset. We quickly exited the van for a short hike up the hill to our vantage point, and waited for sunset. Mike and I brought along a full spread for the evenings festivities including wine, cheese, and chocolate, amongst other things. As a group we waited there on the cliffs edge, shooting patently for sunset when the glow of the evening lit up the air just beyond our sight. With longer exposures we successfully slowed the foam trail in the pool below as it danced around in a circle. As dusk wore on, we packed up and made the long journey back to Pullman where we would get to sleep in before heading out in the morning. 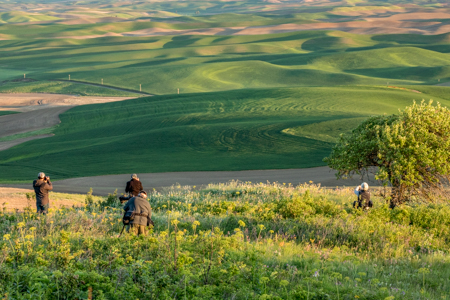 Everyone was excited to sleep in this morning, as waking up at 3:30 takes its toll. So after breakfast at the hotel, we headed out around 8am and made our way to a little valley that was once the town site of Elberton. In the late 1800's the plentiful lumber in the area led to folks establishing a mill on the Palouse river, and for a couple decades, life was grand. But, as most of these stories go, the town died not too long after it started. First the abundant forests in the valley were mostly cut, then the town was plagued by a large fire that burned a lot of it to the ground, and lastly a major flood caused most of the residents to move out and abandon this valley. Elberton is now a peaceful park, you'd never know by walking around here, that a rather large settlement of hundreds of people existed. The trees and wild grasses have all regrown, birds and other animals loudly announce their presence. Its once of te most peaceful places in all of the Palouse. For well over an hour, we explored the woods and river of the old town site before driving out of the valley and stopping at above it. We took our group shot on the top of the river gorge, overlooking Elberton, the Palouse river and Steptoe Butte, and then we headed back to Pullman for lunch. After a short break for food, we met everyone in the conference room of the hotel for some post processing workflow. I spent the better part of an hour walking everyone through my digital workflow, from card to hard drive and organization to edit using Lightroom and Photoshop. Since our luck with the clouds wasn't as great as Mike and I had anticipated, we thought it best to give a little primer on some sky replacement therapy using Photoshop. Once we had completed that, we headed back out for one last hurrah. That afternoon saw us shooting at the famous T.A. Leonard barn, an unusual sight to witness a round barn in any place, but there it was like it had been since 1917. We headed into Idaho tor a look at another unusually shaped barn with beautiful wild green grasses off in the distance. Then we headed out to the Dahmen Barn which was built in 1935 as a dairy barn. Now its an artists haven and since 2006 has been open and showing and selling local crafts and artwork. The unique feature of this barn is the over 1000 wheels from ancient farm equipment that surrounds the property which the original owners nephew (Steve Dahmen) built over a 30 year period. From there we headed over to an old house still standing after nearly 130 years for sunset. Luckily the owners were there so as sunset persisted, we got an impromptu history lesson on the farm and family history. An awesome treat to end our three day adventure. Thanks to all our students on this one, your passion for photography and willingness to let us help inspire you is what makes these trips special and our jobs rewarding!