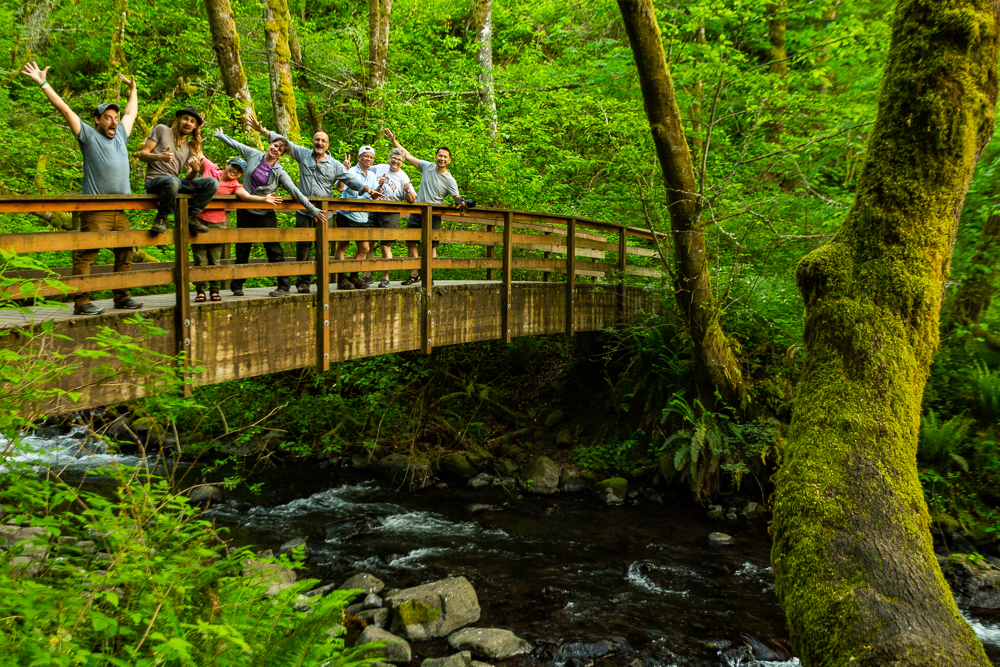 The Columbia River Gorge is a massive 80 mile long gorge carved through the basalt fields just east of Portland. A massive flood occurred about 15,000 years ago that helped to carve out the gorge as we know it today. Waterfalls are a plenty and the scenery is awe inspiring. The region is nearly green all year long and in the summer months, where rain is less of a threat, the area is prime for photography. Every year, we at the Aperture Academy descend on the area with multiple groups of eager photographers, and help them in their quest to nab some images of this fantastic region.

Troutdale Oregon is our home for the workshop, and just like every other, we met our clients the evening before the workshop to go over what was to come for the next few days. The weather forecast was amazing, highs in the 80's, very little cloud cover, the locals would be ecstatic, however we yearn for cloud cover on this workshop because the main focus is capturing waterfalls. How does one deal with shooting waterfalls when there's no cloud cover? Stay tuned... 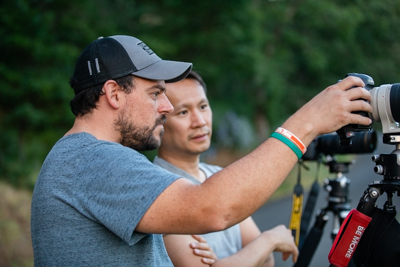 With the threat of bright sunlight cutting our shooting schedule short, we headed out super early, before dawn, just over the border into Washington. Nice even light is perfect for shots anywhere around water. Bright sunlight causes harsh highlights and deep shadows on the scene, so shooting mid-day is a no-no. Our first stop was the old mill along Cedar Creek. The mill processed grain as early as 1876, using the power of river to turn a massive stone grinding wheel. The warm tones of its wooden planks contrast neatly with the green foliage surrounding the sight, and from no less than 5 vantage points, one can produce some awesome images! Mike and I helped the group setup and get the most out of the soft even light we were presented with. The mill sits well below the tree line exposed to the sun, which gave us an extra hour or so of shaded light to play with. After the sun began to shine through the trees, we exited the area and headed back towards Portland. In town, we stopped at Cathedral Park, which sits directly underneath the St Johns Bridge. A beautiful minty green suspension variant, with its concrete towers underneath mimicking Gothic cathedral architecture. From many vantage points under the bridge, the towers align, producing a cathedral looking scene, with a beautiful willow tree as the focal point. After staying there for hour or so, we headed back to Troutdale for our mid-day break.

In the afternoon, we headed out quickly to Jonsrud Viewpoint, to grab some photos of Mt Hood surrounded by a mass of large puffy clouds. The scene was awesome, but hey, we had waterfalls to shoot! So we headed east to one of the few waterfalls on the Oregon side that weren't affected by the fires the previous summer. We stopped at Starvation Creek falls, where 190 feet of waterfall was just about in the shade. Mike led a group up to the top of the first cascade, and I stayed down and helped everyone else work the bottom cascade, and the wooden footbridge that crossed over it. Again, after an hour or so of shooting, sunset was approaching, so moved on into the Hood River Valley. There's an unnamed viewpoint there which provides a perfect vista of Mt Hood, while overlooking a vineyard and orchard. As our luck would have it, all the clouds that surrounded Mt Hood earlier, had moved west and left us with a clear sky save one little cloud which floated just over the peak. The light was still very pretty and Mike and I helped everyone get the best out of the scene before calling it an evening. 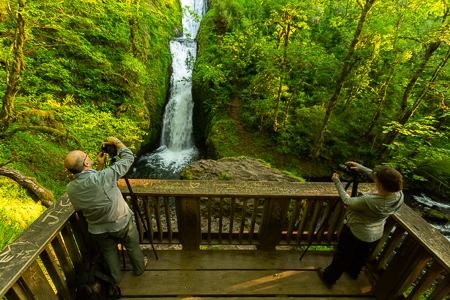 We once again headed before dawn, trying to beat the sun from ruining our light. This time we we went into Washington again and stopped at Dougan Falls, a local swimming hole during the hotter days. This early in the morning, we had the place all to ourselves, and the although the waterfall itself is a bit average, what makes this place special is the large circular pool which swirls constantly from the force of the falls. Thousands of bubbles traverse a never ending circular course which is only visible with longer exposures. Once we got everyone down to the base of the pool, the magic began, and peoples eyes opened in complete awe at what they were able to produce from this place. As the sun crept higher, we traveled again, deep into the mountains, to photograph Panther Creek Falls and its 130 foot cascades. Recessed in a cleft between two hills, Panther Creek is somewhat obscured for the better part of the morning. So we had everyone quickly grab some sun-less shots of the face of the waterfall before the sun came into the shot. After everyone successfully got the idea, we had them spread out and work on the details of the upper creek and the cascades. The light pouring in through the trees actually can make for some great ethereal photos! Having been up shooting for hours now, our group was getting tired, and we headed back to the hotel for a desperately needed mid-day nap. We headed out again in the late afternoon to two more falls, the first Latourell Falls, is shaded by a large basalt amphitheater complete with resplendent lichens. After everyone was helped with classic shot of the footbridge, we worked the immediate area in and out of the water to capture the falls in all its glory before moving on to Bridal Veil Falls. For me personally, Bridal Veil is one of my favorites, but not for the waterfall itself, there's an amazingly placed footbridge that has the cascading creek directly underneath. Bridal Veil also has a multitude of vantage points that capture completely different perspectives of the falls and creek. The area is also pretty large, so its easy for Mike and I to have the group really spread out and grab some unique images. Once again sunset loomed and we headed up to The Womens Forum Overlook, which sits about 800 feet above the Columbia river. The vantage point from here is incredible and we would have stayed until sunset, but Mike and I had one of those gut feelings that the area down the gorge where we were looking, wasn't going to catch the light from sunset. So with a half hour to spare, we headed to the Vista House, a mile away, which had views both east and west, to cover our bases. We ended up being right, as the most dramatic part of the sky was in the west towards sunset.

After the last light, we headed back to our hotel, dropped off our photo gear, and went out to a local spot for a group dinner. Everyone was thrilled with the images they had been gathering over the course of the workshop, and this little R&R with everyone was a perfect time to unwind and chat about something other than photography. These moments are why we keep doing what we do! Thanks to everyone for being awesome and putting your trust in two "ski's" from the Bay Area!

Scott, Mike, and the rest of the Aperture Academy team!