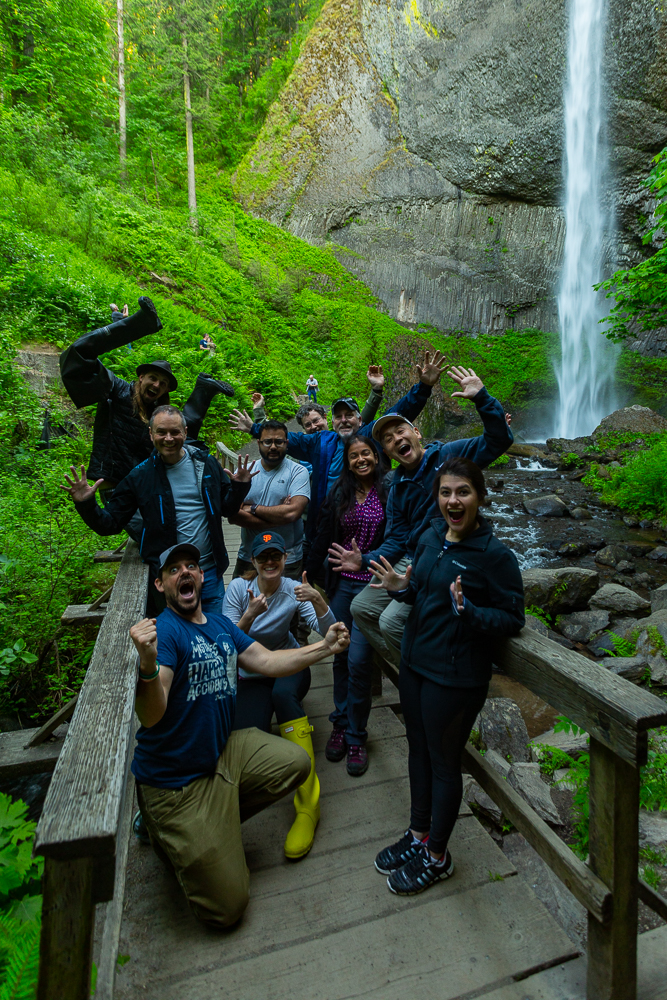 The Columbia River Gorge is the largest National Scenic area in the United States and is an impressive 75 miles long. It is no wonder that it is a popular destination for photographers and nature lovers alike. The gorge was carved out by flooding that took place 12,000 years ago and is home to 75 waterfalls. That’s one waterfall per mile!

Oregon is one of the most beautiful states in the country and the Columbia River Gorge happens to be one of Scott and I’s favorite workshops. On a warm spring evening in May, a fine group of photographers met in a hotel lobby located in Troutdale OR. The group mingled for a bit before we went around in a circle introducing ourselves to one another. Once orientation was over it was time to ward off that excitement and get to bed.

The sun rises pretty early in the spring mornings of Oregon, so we had a nice and early start time of 4:30am. Our first location was the Cedar Creek Gristmill. The Mill was built in 1876 and is the only grain grinding mill in Washington that still holds its structural integrity and is still operational. Tucked away in a narrow wooded gorge, the photographic opportunities are nearly endless. The group spent a good portion of the morning photographing the mill, creek, and surrounding vegetation. Once we had our fill, we headed over to Portland to shoot the St. Johns Bridge from Cathedral Park. The park gets its name from two 400’ gothic towers that suspend the bridge over the park. Using the repeating patterns of the concrete pillars below the bridge we framed a lone willow tree to create a well-balanced photograph. From Portland we headed back to our hotel in Troutdale for a midday break.

For the second portion of the day, Scott and I took the group to bridal veil falls. This waterfall and set of cascades is another hidden gem in the gorge. There are many different perspectives to shoot from, which means everyone walks away with a different photo! From there we continued on to Starvation Creek. The Creek and waterfall get their name from a train that once became stuck in a snowstorm for weeks. The creek offers many small cascades to shoot and a larger waterfall that can be accessed via a short hike along the creeks edge. After about an hour of shooting we drove through the quaint town of Hood River to a pullout that overlooks apple orchards eventually giving way to Mount Hood. 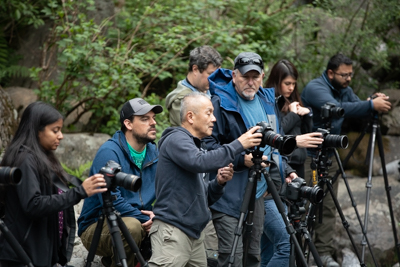 The following morning we piled into the “Ap Cab” at the same time as the previous day and drove over to Dugan Falls. Dugan falls is a relatively short waterfall but what makes it so interesting is the beautiful swirling of bubbles that happens in the pool below the fall. The group opened up their shutters for ten to thirty seconds at a time to capture the unique swirling within the pool. Once everyone was happy with their shots we packed up and headed to Panther Creek Falls. This area happens to be one of my favorite spots within the gorge. The shooting possibilities go on and on. Some folks shot the top of the falls while others chose to hike down and shoot the bottom of the falls and before we knew it, the morning had escaped us again.

In the afternoon we headed to Lower Latourell Falls. This waterfall takes a 249 foot plunge into an amphitheater made of basalt. Scott and I showed the group a unique shot using the footbridge below the falls and then we set the group free to explore the area. For the final shoot of the workshop we drove up to the Portland Women’s Forum overlook. This is one of the best views overlooking the gorge because of its location high up on the gorge wall. The group waited for the sun to drop and then they let their shutters fly. Once the sun had set we drove back to the hotel and most of the group decided to get dinner at the Historic Edgefield Hotel. This place is the icing on the cake for a workshop that is already filled with so much beauty.

Scott, Mike, and the rest of the Aperture Academy team!