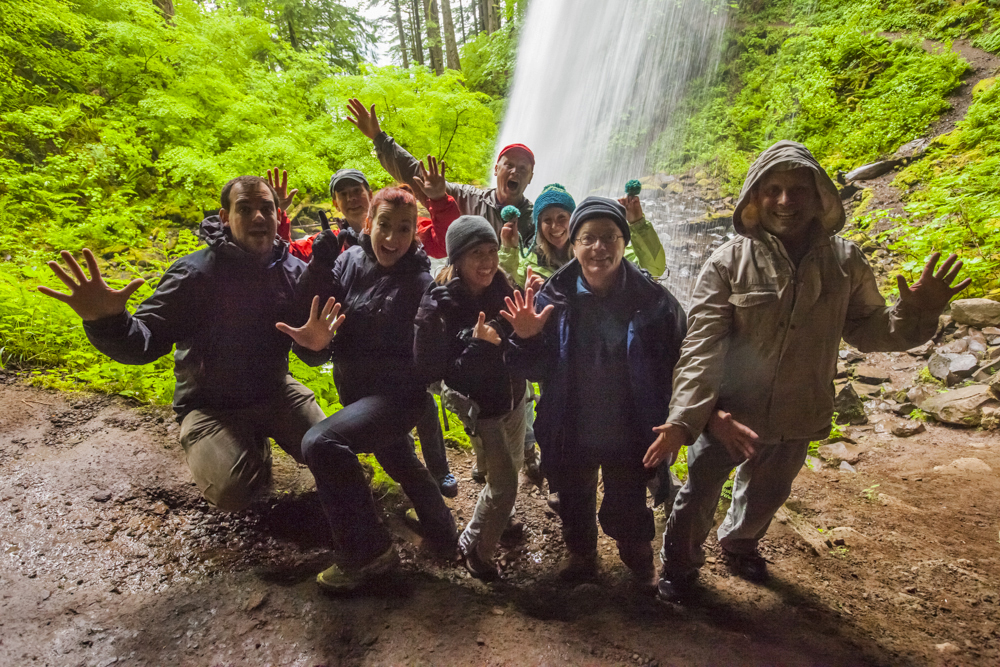 Oregon's Columbia River Gorge is a waterfall mecca, boasting 77 lush falls. Some of the waterfalls are accessed with extreme ease, while others take a bit more effort to enjoy, nonetheless they are all amazingly lush, green, and picturesque. When you're immersed in the lush foliage it's as if you're in another world, it's calming and breathtaking, at the same time.

Scott and I had just finished up our first Columbia Gorge workshop and were ready and eager to meet our new group of students, for round two of photography in the Gorge.

We all met up in the hotel lobby for a meet and great. Scott and I talked a little about ourselves, but we were eager to hear from the students. Gaining insight into everyone's skill level and expectation is paramount. Afterwards I went over the basic itinerary for the next couple of days. We always remain flexible on locations, and don't stick to a regimented schedule, as Mother Nature can throw some curves balls your way, from time to time. Such was the case for our next couple of days in the Columbia River Gorge. 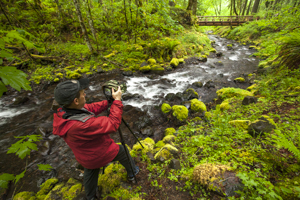 After a good night sleep, we grabbed a quick bit of breakfast, downed some nice hot coffee, and off to the Gorge we went. Although the forecast called for rain, luckily our morning was pretty darn dry. Scott and I showed our group a diversity of falls in our first morning. All the while, helping with compositions, appropriate aperture, iso, and shutter speed settings. Also demonstrating the proper use of a polarizing filter. Utilizing a polarizer while photographing water helps tremendously, due to it's ability to reduce glare. We worked quite a bit on iso and shutter speed. With moving water, such as with waterfalls, obtaining a shutter speed that is faster than two seconds, yields very appealing results. If the shutter speed is too slow, the moving water looses all detail, and resembles flowing milk, rather than water. The students were capturing some amazing images, and it was only the first morning. Scott and I revealed a few of the Gorge gems to the students before our lunch break. The forecast looked a little rainy for the afternoon, so bringing the rain gear was a must. Not only is the Gorge unique for it's gorgeous waterfalls, but our workshop is quite unique for this location as well. We actually want the overcast skies for photographing waterfalls, as this provides us with soft even light, in which we can shoot in all day. Well Mother Nature presented us with some nice soft light, via clouds, however those clouds were leaking…also known as rain. Scott and I had three locations on tap for the afternoon and our first was a short hike, down to Bridal Veil Falls. Everyone had rain gear for themselves and their cameras. To make things easier, Scott and I brought umbrellas, and held them over the students, to keep those pesky drops of the front of the lens. Despite the rain, spirits remained high, and the photography continued. We hit up two more locations and captured some beautiful and iconic waterfall images. By the end of the day, everyone was feeling a bit damp, so to raise spirits we all went out to a nice dinner, listened to some lovely live music, and enjoyed some engaging conversation. 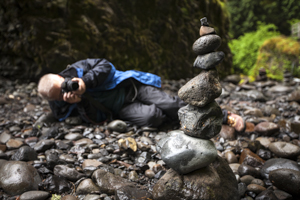 Moring two began a lot like day one, with the exception of some very light rain. By now, everyone had a system for keeping themselves and gear dry. The first two locations of the day turned out to be the favorites of the students. No surprise there, as they are my favorites as well. The first is smaller in size, but it's lush and beautiful. The walk up has a plethora of locations for cascade images. The second waterfall is actually over the river, on the Washington side. It's a little remote, but well worth the drive. Panther Creek falls is 130 feet of sheer power. The falls is spread out, and is comprised of lots of small falls and cascades. The river that feeds a major section of the waterfall has a ton of photo ops. It's easy to spend hours at this location. We spent well over an hour shooting, but bellies were rumbling and batteries were in need of a charge, the indicator that break-time should be next on the agenda. 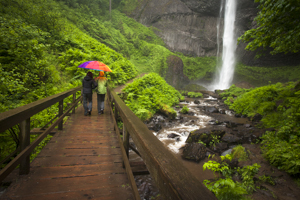 After break we made our way back into the Columbia River Gorge for one final waterfall. We had a short but steep hike ahead of us, so we began our accent with the slightly damp, but sunny in spirit students. Upon arriving, I set up a quick group shot, before turning the students loose to photograph from the many vantage points. As always, Scott and I assisted with composition ideas, while ensuring that everyone had the proper exposure settings. By now the students were feeling really good about shooting water and waterfalls, and this was obvious by the excellent images that we witnessed on the back of many LCD screens. Everyone pilled back into the van for our last trip back to the home base hotel in Troutdale. Everyone exchanged farewell pleasantries, and another successful Columbia Gorge Workshop was in the books.

Ellie, Scott and the rest of the Aperture Academy team