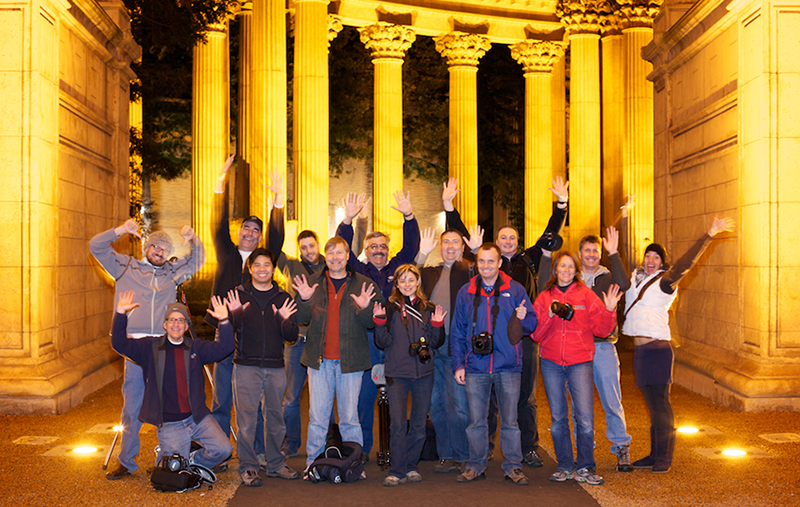 Friday the 13th. Is it an unlucky day? A day of terror? It certainly is a crazy day, no matter which person you ask...it's a day of uncertainty. Nobody knows what is going to happen on Friday the 13th. What could hold more uncertainty than the mystery of nighttime photography?

A group of 12 eager photographers met Aperture Academy instructors Brian Rueb and Alicia Telfer at Baker beach on a dark Friday night in hopes of learning more about night photography and not running into any hockey mask-wearing freaks with cleavers.

The class began with a brief orientation so the class could get to know a bit about one another, and the instructors could better grasp the gear, experience level and instructional goals of each student before going into the workshop. Once the formalities were out of the way, we set off for our first stop - The Palace of Fine Arts. 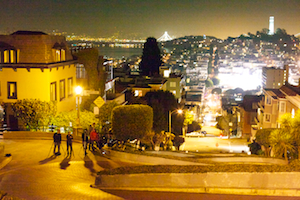 The Palace of Fine Arts is a relic left over from the World Fair's stop in San Francisco in the early 1900s. During the evening, the structure is lit up and glows like a giant columned jack-o-lantern. This is a good spot for our class to cover a lot of different topics, from the basics like shutter speed and aperture all the way to more difficult topics like composition. Alicia and Brian began working with students in the pond area, where the giant structure was reflected beautifully in the dark water. With the exception of the splashing from a few groups of ducks, the reflection was always very nicely detailed and instructors went over the best way to capture the reflection, and the importance of not cutting it off in compositions. 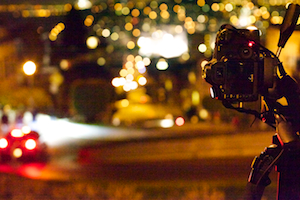 From the outside to the inside, our group moved to beneath the domed structure to work on close up shots of the columns and shapes inside the dome. Lessons on symmetry and how to compose subjects that are highly symmetrical were helpful to the class as they came away with some truly stunning images from this part of the location. Along side the dome sits a few smaller pools of water that are often dead still, and they create some perfect mirror reflections of the surrounding columns. Brian pointed the pool out and several of the students spent some time in this area getting some really nice perspectives on the almost abstract scene. 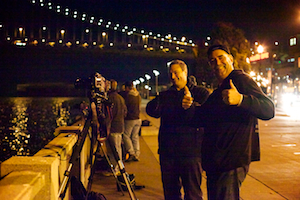 Lombard Street is a twisty maze of red cobblestone bricks that create one of San Francisco's most iconic locations. It's also our second stop of the night. The group split into two smaller groups and Alicia and Brian worked with the students to capture images of the cars as their headlights and taillights would streak down the tight twists and turns. Shooting an image like this requires a few tricks and a lot of patience; it was fun for the class to see the images appear on their screens and to grasp how to work with lighting that can be very different depending on whether you are photographing looking up or down the road.

The groups spent about thirty minutes in one spot before switching instructors and going to the next location. In addition to capturing the streaking red taillights from above, Alicia also showed the class a bit of light painting to fill the time between waiting for cars to drive down the hill. 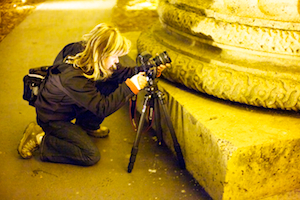 Soon it was time for a short break in the bustling North Beach area of the city, so the class could grab a drink or snack before we set off the Embarcadero to shoot the iconic image of the Bay Bridge with the old pier pilings in the foreground. This shot is a classic San Francisco image, and for many of the students, it's the image that drew them to want to take night classes in the first place. The light was great and Brian spent some time with the class going over white-balance and how different it can be during night photography from one location to the next. It's always great to see the class "oooh and ahh" when they see their own versions of the scene begin to appear on the screens.

The class was great all night long, cutting jokes and having a grand time learning, laughing and gathering new images. In spite of it being Friday the 13th, there were no suspicious characters from horror movies wandering the streets wielding large machetes, and nothing suspicious went down. It was just a good, clean, fun night of photography with the Aperture Academy...which is just the way we like it!

Until next time,
Brian, Alicia, and the rest of the Aperture Academy Team