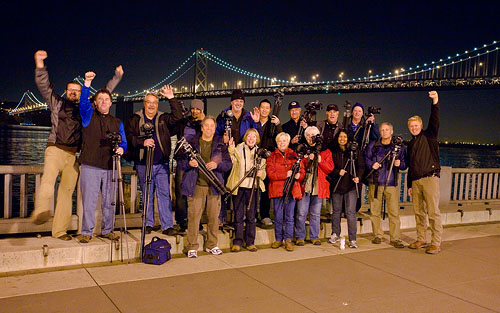 Every type of photography has a maiden voyage. For many, night photography has been a daunting and confusing form of the art that required this voyage in order to shed some light (pun intended) on how to capture breathtaking imagery when the light of day as long passed. A group of 14 students met instructors Brian Rueb and Scott Davis on a beautiful winter evening at Baker Beach in the shadow of the Golden Gate Bridge to learn more about night photography and have some fun.

The group had a great vibe from the beginning and everyone was eager to get started and photograph the beauty of the night in the magnificence of San Francisco. The group began the shoot out on Baker Beach photographing, the Golden Gate Bridge. The spot is by far the trickiest lighting of the night...but it gives the instructors a chance to get right into the instruction and begin to answer some of the technical questions people have with their gear. Our students come to us with a variety of skills and educational goals...the first location is less about the photography, although it's quite nice, but more about getting to know our class and establish a rapport.

In addition to this being the maiden voyage for many students with night photography, it is also the maiden voyage of "ApCad 1", our new passenger van that we will use to provide comfort and style to all of our workshops in the field. The class was as excited to ride in the van as Scott was to drive it.

Our next stop, The Palace of Fine Arts, we would say, was the group favorite just given that they scattered like kids at Disneyland. We managed to corral them in the beginning and go over the settings and help with some compositional instruction as well as they worked the pond area in the front of the palace shooting the pristine reflection and glowing gold structure. Once we've worked the reflections of the location the idea is to all head into the center of the structure and shoot some of the architectural pillars and details. The only issue was everyone in the group kept getting excited by different vantage points they saw and then it was like herding very enthusiastic cats to get them all under the dome to continue their shooting. This is a good problem to have though. We'd rather our instructors have to walk a bit to help a student get the shot they want than not provide them with the personalized instruction that they came for. The whole Palace area was fantastic, 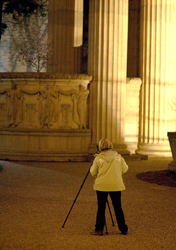 and the students found so many interesting and great locations to photograph that many proclaimed they could've spent the whole night in just that one area....but we had other spots to shoot that were just as nice.

Lombard Street is an icon of the city by the bay. Trolley cars, cabs, and the occasional Porsche all drive to the area to see the serpentine cobblestone street, or in the case of the cabs and Porsche, try their hand at navigating it for themselves. We came to photograph it. For our class this location is a great spot to work on combining longer exposures with the leading compositional elements of the ‘S' curve and create a headlight painted masterpiece of night photography. We break our group up into two smaller groups so Brian and Scott can not only fit into some of the areas tighter locations, but give the students chances to photograph the street from more than one angle. 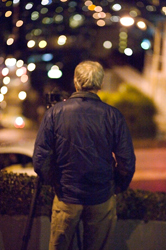 Unfortunately, our ApCad van isn't equipped for navigating the winding road of Lombard....so we take the less scenic route to our next location, the Bay Bridge from the Embarcadero. After a brief stop to get a snack and something warm to drink our group arrives at this iconic viewpoint. Many of the students are very familiar with this image either through our gallery, or from various sources online and want their own version of the shot. Seeing an image like this for most students had seemed like something that was nearly impossible to achieve....they enjoyed the shot, but thought it was too difficult or created with some kind of magical process. It's great for us when we see the students so happy with what they have learned through the course of the evening, and are now putting into practice in creating their own version of this famed image.

We love ending our class at this location...it's the realization of what they'd hoped to see and create in their time with us...and listening to the happy photographers as they load back up into the ApCad 1 and set off for the comforts of home, we know they'll be looking forward to the next day when they can set to the task of processing those images they made while on their maiden voyage....

Until next time, Brian, Scott, and the rest of the Aperture Academy team!