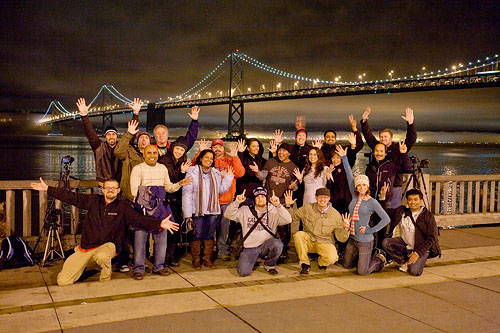 As night set in over the city of San Francisco, our group was making their way to meet with the Aperture Academy team of instructors.

No only was it getting dark, but it was also getting foggy — a rare winter fog was setting in due to an unusual weather pattern in progress. This was good and bad...bad that our first stop at the Golden Gate Bridge was hampered by too much fog but good because fog reflects back the city lights and brings a lot of drama to the night sky. 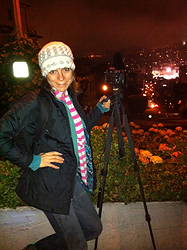 After orientation and introductions, we headed to our first stop, the Palace of Fine Arts. The fog created nice patterns above the glowing dome, and the water in the pond was reflecting the Palace perfectly. It was some of the best conditions we've seen at this location. Everyone setup and we spent an hour shooting the Palace, and learning how to adjust aperture and shutter speed to capture a well exposed, sharp photograph. We also worked with white balance to get the best representation of color possible, so that our images matched what we saw with our eyes. 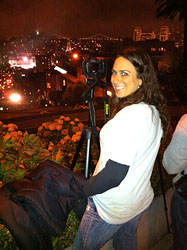 From the Palace, we loaded up into the van and headed off to the "crookedest" street in the world...Lombard Street. This is such a fun stop, and a great place to learn how to capture motion from car lights as they streak past down the winding brick roadway. We worked many different angles and compositions and ended up at the top of the street shooting down hill, with Coit Tower and the Bay Bridge in the distance. If you've never seen this view before, you're really missing out!

As the night drew on, the fog began to lift and visibility for the Bay Bridge was looking really, really good. We again loaded up the group and headed further into the city. After a quick snack and bathroom break, we made our way down to the Embarcadero and one of the most scenic and icon locations in the world...the Bay Bridge from the Ferry Building.

The fog was perfect above the bridge and had a nice pattern to it, glowing with the ambient light from the city. We framed up our compositions with some old concrete piers in the foreground and put the span of the bridge across the top of our viewfinders.

Hard to believe, but midnight snuck up on us, fast! Everyone had a camera full of images but since a few yawns were being seen, we packed up and headed back to the parking area to send everyone safely home.

Brian, Stephen, Scott and the rest of the Aperture Academy team!