On this Friday evening in August, our group of Night Owls met at Baker Beach to start a night of photography, exploring the city of San Francisco and observing scenes that are usually hidden to the human eye.

Baker Beach at the gate of the Bay is the perfect place to start the night off. In front of the impressive backdrop of the Golden Gate Bridge, lead instructors Brian Rueb and Stephen Oachs set the goals for the night; teaching students how to use their cameras in manual mode, and about composition, aperture, exposing a scene correctly, and hyper focal distances.

The crashing waves provided some nice foreground elements to anchor the composition and lead the eye to the Golden Gate Bridge hiding its expansive beauty in a thick layer of fog. While you might think fog is bad, it is actually an interesting way to get creative shots from heavily overshot places, such as the Gate into the Bay. After the first few frames were captured on CF and SD cards, our students felt more confident to venture out and explore more of the beach and rock formations, to eventually get their feet wet... literally.

This gained confidence was transferred to our next spot of shooting, the Palace of Fine Arts, right in heart of San Francisco, where the sky was about to turn steel blue. This time of day, the so called "Blue Hour," provides some of the most impressive light of the night for cityscapes, with great contrast of city lights and dark blue sky.

Little did we know, the spot was a meeting place for all of San Francisco's wildlife that night, and students and instructors alike were astounded by the Great Blue Heron family nesting in the trees around the Palace of Fine Arts and the two raccoons eating up most of Stephen's cookies. Despite these surprising guest appearances, our Night Owls (referring to our students, not our feathered friends) composed some great images and worked on the first longer exposures of the night to achieve some smooth reflections on the water. 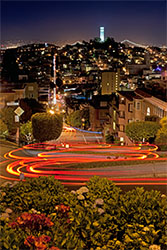 The next spot of the night, famous Lombard Street, is probably the most fun for the students (maybe not quite as much for the instructors because of the challenge there can be to find parking space). The "crookedest" (and "awesomest") street of San Francisco was calling for some attention and this is what it got; plenty of it.

The group ventured out into the winding twists and turns, eager to find compositions and the right timing to capture the light trails of the many cars going down Lombard Street that night. Whether our students aimed for the iconic view overlooking the city or got in close to create some abstract images with leading lines from the curb and passing traffic, the images appearing on the back of their camera screens made an impression on us. Even more of an impression than the girl who leaned out of the sun roof screaming, "This is like Titanic, wooohoooo!" while going down Lombard Street. (Though, we did find that pretty funny.)

After a little laughter and sharing some of the great images captured with the group, it was time for a break, some coffee and a snack, before tackling the last shooting spot of the night... The Embarcadero, with the equally as impressive Bay Bridge towering over the Bay. The old pylons from a pier at low tide made a perfect foreground for multi-minute exposure to capture the glory of this place. Students were eager to find out about custom white balance and how the color temperature affects the mood of the image, as well as tweaking the aperture to get the sharpest star-like appearance of the street light spanning the bridge. At one point they were interrupted by a group of 60 rollerbladers speeding along the esplanade, accompanied by a guy with a stroller loaded with a blasting boom box. But they kept focused on their exposures.

Having captured some impressive imagery all day, excuse me, all night, our Night Owls were ready to fly home to their nest, known as Baker Beach. BUT, our Night Owls workshop would not be complete without a little San Francisco nudity and so we passed the Hustler stripper truck on our way to Baker Beach, full of girls dancing in a giant glass cube. What a way to end a great night of photography...

On behalf of Stephen, Brian and David, thank you for a great time!