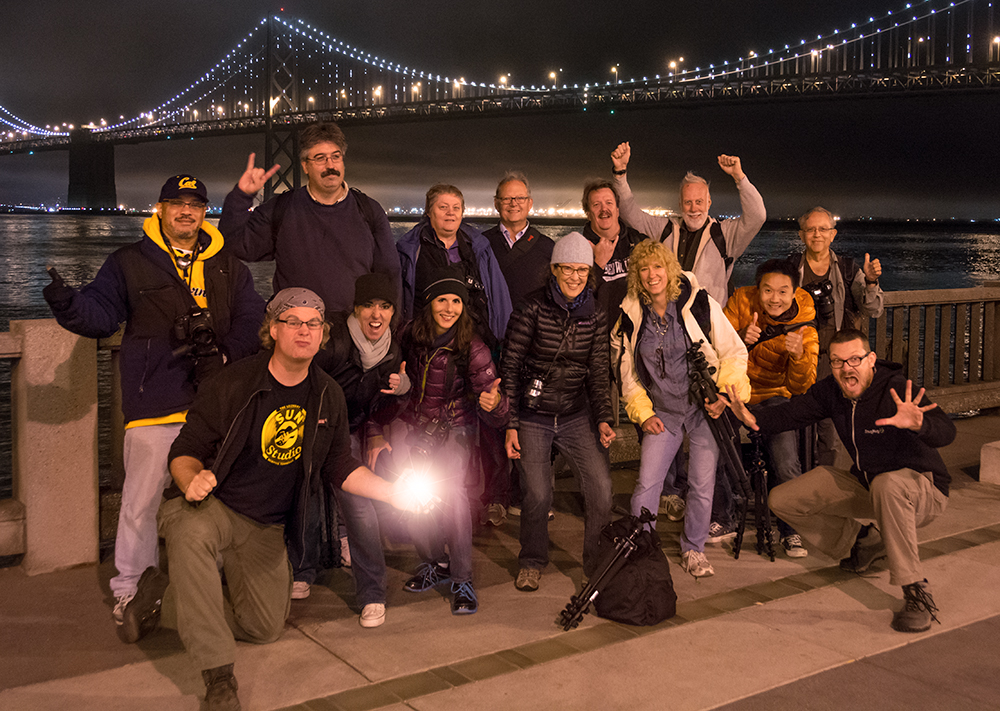 Nighttime photography is quite tough for a lot of people. It's doesn't work necessarily the way your mind wants it to work. Throw in the fact that most cameras white balance settings will throw ones photos into a horrible color cast, and it really is easy for a newer photographer to become discouraged with the notion of making quality night shots, and give up.

At the Aperture Academy, we help people lose the fear, fix their mistakes, and gain the confidence to roll out into any night settings and come away with great images. Matt Granz and I met a group of 13 students on Baker Beach in San Francisco for a night of fun, frivolity, and photography.

We always start out if possible close to our orientation point, we really want to get those cameras out and start shooting. It gives Matt and me a chance to really learn where the photographers at in their camera knowledge, and how much they understand shutter speed, aperture, ISO, composition, and some of the other foundational aspects. 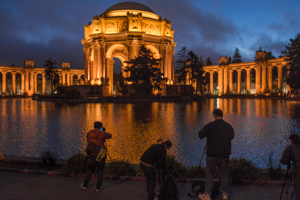 Baker Beach is beautiful and has a wonderful shot of the bridge. I personally like to talk about composition here in addition to the settings. It's good to use leading surf lines, and cliffs to anchor the bridge in the scene to make a more aesthetic looking image. We only stay until the sun has just set behind the horizon because it's necessary to go in order to get to the Palace of Fine Arts for the twilight blue hour. This time of day the sky is a lovely hue of blue, and the orange and gold of the Palace really make for some beautiful shots. There were some clouds lingering in the sky, which turned a nice shade of pink when photographers captured it, and added further to those lovely images we saw on the camera backs.

The blue hour is also the best time to get an even detailed exposure. The darker it gets in this location the more contrasting the tones become and eventually it gets to the point where multiple images need to be taken in order to capture the full range of tonal values. We do discuss exposure blending some as well and people enjoy the opportunity to learn how it works, and get some images to practice these techniques at home.

When the sky has faded to black we move under the structure to photograph the pillars, and nice symmetry. These patterns and shapes make for some great, almost abstract imagery. We can also talk about lowering the shutter speed down under 10 seconds in most cases, where as we were around 50 seconds when we left the reflection pool area outside of the Palace. 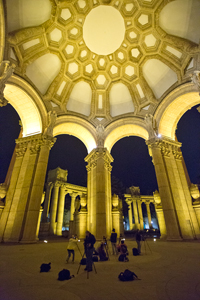 Our second stop of the night is Lombard Street. I feel like I know this street at this time of night SO well. I can predict when the dogs come to get walked and I even know their names. I know when the lady leave for work, and what she'll say to us, I know where the cars stop and ruin shots most, when the lights of the nearby park go off, and an predict it fairly accurately. It was a lot of fun for the group I had first…they couldn't believe it until things started happening one after the other. By the time Matt and I switched groups and my headlight shooters went to become the taillight shooters, all my predictions had come true...so the second round we had nothing to wait for.

Despite the random occurrences on this street, the photography is why we come and it's always fun for people to learn how to take those images where the car headlights and taillights are streaking through the scene…and Lombard streets twists and turns are the BEST spot to see that in all its beauty. We let the class shoot from the top down and bottom looking up, all getting great long exposure shots, and learning some of our little secret tricks along the way. 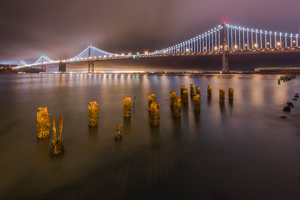 With a small stop in Little Italy for a warm beverage under our belt, we have but one stop left on our magical night tour: Embarcadero and the Bay Bridge. This shot hangs in our gallery and people readily admit it's what draws them into night photography. When we tell them that by the end of the night they'll have their own version to take home, well, they are ecstatic.

By this point in the evening the aperture and long shutter speeds are almost second nature to the class, and they're happily plugging away shot after shot. Matt and I are there to help adjust white balances, tweak shutter speeds, and make sure those compositions are just right... but by and large they've got it down…and man does it show in the screen images we saw! I'd say this group not only came to San Francisco in search of great night photos, but they GOT them…and now they know how to do it again!

Brian, Matt and the rest of the Aperture Academy team