Changing things up from previous workshops, our group tonight met on the shore of the San Francisco Bay with a great view of the Golden Gate Bridge. After brief introductions and a discussion of the night’s itinerary, we set off to start our night of shooting.

We walked from our meeting point to the famous Palace of Fine Arts. The large dome is architecturally beautiful, as are the large columns. Both make for a great photographic subjects during and after sunset, especially with the large reflecting lagoon. Following a beautiful blue hour, we were off to Lombard Street.

At the crookedest street in the world, Lombard Street, we worked multiple angles and discussed camera settings for good light trail photography. We shot both uphill and downhill to create different compositions. This is also a good place to capture Coit Tower with a longer lens.

Our next stop was supposed to be near the Bay Bridge but with the traffic of a Giants game we elected to alter our course. Instead, From Lombard Street we drove to the Sausalito side of the Golden Gate Bridge. The northside of the Golden Gate Bridge was a bit chilly and breezy, but still picturesque as usual. Out on a large pier, we captured striking images of the bridge. We also practiced doing some light painting with some gigantic cleats on the pier. Everyone enjoyed experimenting and playing with this technique. 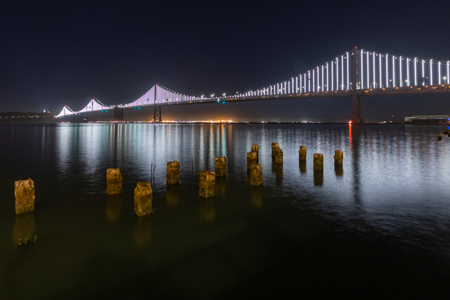 As the Giants game had ended and our time was winding down, we loaded up again and headed off. Our final stop for the night would be along the Embarcadero to shoot the Bay Bridge and watch it’s awesome art display of lights. The Giants fans and traffic were largely cleared out so we were able to easily park on the Embarcadero and do some shooting. In addition to shooting the Bay Bridge and its lighting reflecting on the bay, there are also great opportunities there for shooting light trails of the passing vehicle traffic along the waterfront.

And just like that, it was midnight. Everyone packed up for their drive home, knowing they had captured some amazing photos.