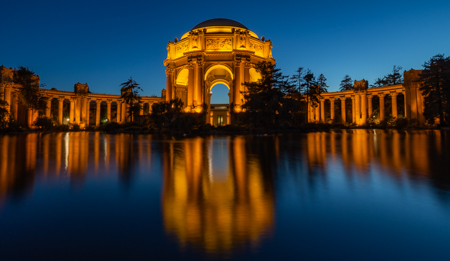 On a beautiful Friday evening, our small group of photographers met in San Francisco near the Presidio. We did a round of introductions that include discussing the goals of the evening, our itinerary, and all of the fun that we were going to have tonight creating great images of some iconic San Francisco locations.

We began our evening adventure at the Palace of Fine Art. This historic structure, an architectural wonder, has beautiful grounds and an impressive lagoon. It is even more impressive at night when the golden lights shine upon the giant columns and the dome, highlighting the intricate details. As the sun faded we shot blue hour photos and worked on various compositions and shutter speeds. As the light continued to fade, our exposures lengthened creating great reflections of the palace dome in the lagoon. We shot numerous angles and perspectives and even had time to wander the grounds after dark to find more great photographic possibilities.

From there, we were off to the most crooked street in the world. When our group reconvened on Lombard Street, we met at the top and discussed some long-exposure ideas for creativity and composition. First, we watched the trails of car taillights move down the road as we created long exposure images. Satisfied with our captures, we moved to a new spot where we were shooting up the hill. We were able to shoot the headlights coming toward us traversing the S-shaped curves. The headlights allowed us to capture the bricks in the roadway and lots of other cool details. Awesome images were captured! 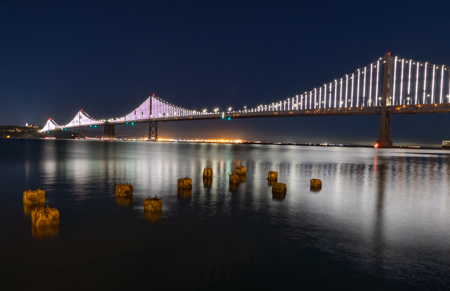 As time was flying because we were having a blast shooting all kinds of different images, we realized it was time to pack up and move on again. We briefly discussed the next stop and headed to our cars. Our next stop was along the waterfront on the Embarcadero. We went to a spot along the water‘s edge with old pilings that made for a great foreground element as we shot the western expanse of the Bay Bridge and its lighted art display. We worked on various angles and talked about various shutter speeds to capture the movement of things like passing boats, and passing cars and we had a great background element with the Port of Oakland.

We were then off again to our final stop of this evening‘s adventure. This stop was the iconic San Francisco Golden Gate Bridge from a beautiful Marin County vantage point. With a large pier available, we walked out to the pier so there was a great view of the Golden Gate bridge and its lights reflecting on the bay. We did not get any fog that we were hoping for, but we still had beautiful blue in the sky and little wind. We shot long exposures and even had time to experiment with a fun technique of light painting on both a person and a large cleat used to tie up ships.

And just like that, our Friday night adventure was over, in fact, we ran well over the end time because conditions were great and everyone was having fun! There is no doubt that everyone got some frame-worthy images, learned a lot, and had a good time with other like-minded photographers.