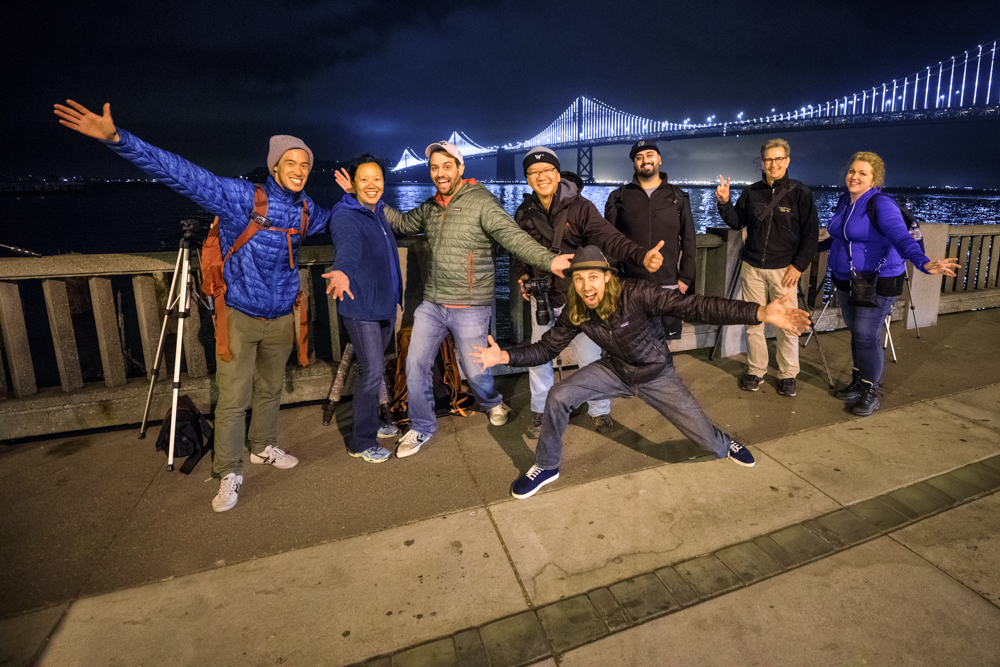 It was a beautiful evening in Marin City. There was a light breeze and the sky was blue. At 7pm a small group of six ambitious photographers met Aron and I for another edition of San Francisco Night Owls. After Aron and I introduced ourselves we had each student introduce their selves and tell us about what they wanted to take away from the workshop. Once we were all acquainted with one another it was time to cross the mighty Golden Gate and get to work.

Our first stop of the night would be The Palace of Fine Arts. This is by far, my favorite building in San Francisco. If you didn’t know any better, you would think that you were in the middle of Greece when looking at the structure. Since we had a little bit of time before the sun would set, Aron and I took the group inside the palace to photograph the intricate details of it ceiling. Here we answered any initial questions that the photographers had and helped them dial in their settings. As the sun began to set we walked around the pond to capture the blue hour with beautiful reflections of the building in the water. Eventually, the blue hour turned to night and the students were able to see the difference that light can have on a scene. 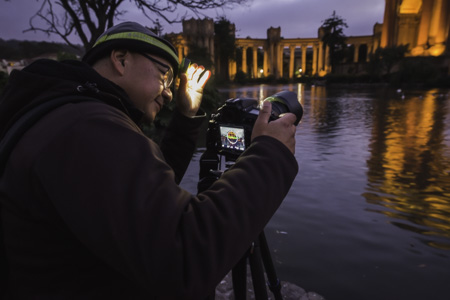 The next stop of the night was the famous Lombard Street. Although this place is a major tourist trap in the day, there usually are very few people there at night when we arrive. First, we photographed the switch-backing road from a number of locations at the top allowing us to capture the beautiful trail of taillights as the vehicles weaved their way down the road. After a while, the group moved a little bit further down the road to try out a few more compositions. Lastly, we moved even further down the road to a position that allowed us to shoot the headlight trails coming down the street. Lombard Street is a prime example of how dramatically a composition can change just by walking a short way from where you started.

After the students had their fill of warping time and space it was time to move on to the Bay Bridge. A few years ago, the City of San Francisco installed the worlds largest LED art installation on the cables of the bridge. This art piece has been a huge bonus for photographers who are looking to capture the beautiful landscape of San Francisco. The group lined up and fired away at the bridge, capturing wonderful imagery at the fog seeped into the bay. Once we wrapped up shooting, we snagged a group photo for memorabilia. 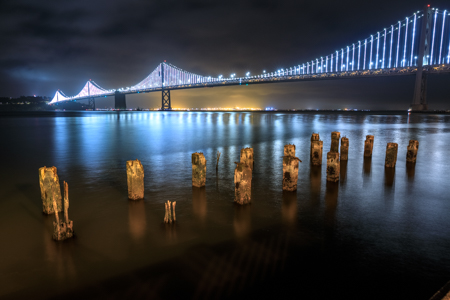 The night was slipping away from us, but we had more stop before we would call it a night. Aaron and I drove the group up into the Marin Headland to fire off a few shots of the Golden Gate Bridge. Luckily for us, the bridge was still visible since the fog was not too heavy that night. By this time, it was 12:30 AM so Aron and I drove the well-worn group back to Marin City where we would say goodbye until the next time.

This was yet another all-star group of photographers and we look forward to working with you again in the future!

Mike, Aron, and the rest of the Aperture Academy Team