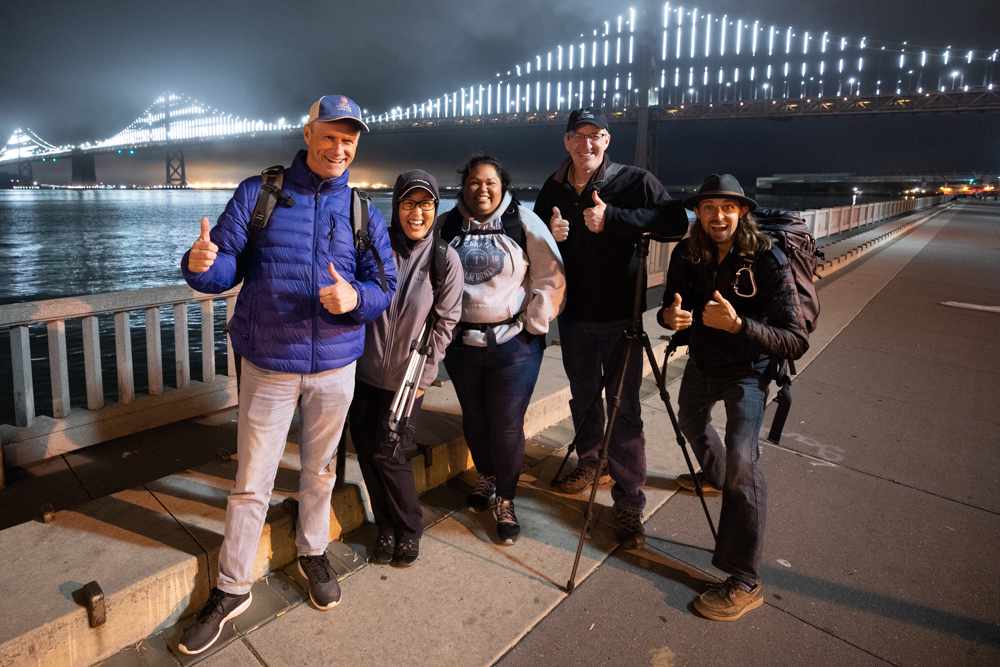 July can be a very busy time in San Francisco, but the patient photographer can avoid these crowds if they wait until the sun goes down. On Friday night, I met up with a small group of photographers in Mill Valley who were ready to take on the city by night. I introduced myself and then proceeded to learn about the small group of students. Once we finished our orientation it was time to get to business.

The first stop was the Palace of Fine Arts to shoot the beautiful Greek inspired architecture from inside of the building. We then headed to the front side to shoot the blue hour light across the pond. This is my personal favorite time to shoot at this location because of the rich gold and blue contrast. Eventually the blue hour gave way to nighttime and we fired off a few more shots so people could see how different types of light will affect a scene.

As time passed, we moved on to Embarcadero Street for the beautiful Bay Bridge lights. The Bay Bridge is the largest LED art installation in the world and it surely is a treat to see and photograph at night. Once we arrived the group quickly went to work at capturing the magnificent bridge. After a successful shoot at the Bay Bridge, it was time to shoot the other iconic bridge in San Francisco.

I drove the group down to Fort Baker to shoot the Golden Gate bridge from below as the summer fog creeped its way into the bay. Before we knew it the night had gotten away from us and it was time to wrap up the workshop. We headed back to where we had met and said our goodbyes.