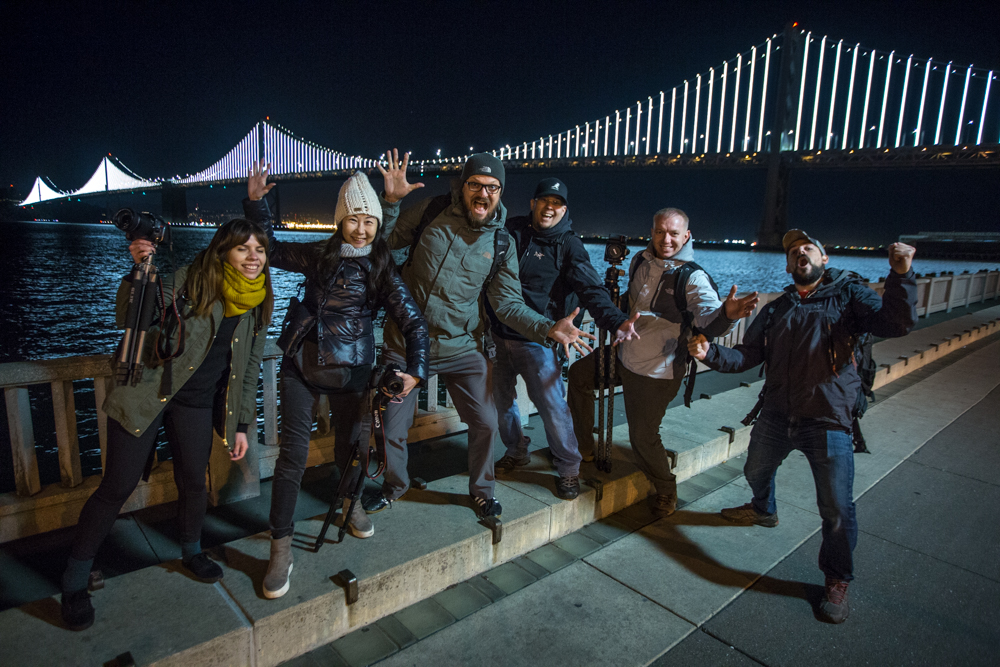 I’m sure at some point, a device will be invented that allows photographers to shoot from the comforts of their home…travelling to any part of the country at any time of day and remotely controlling a camera that takes photos and instantly transport high MP RAW files to your waiting computer…thankfully that has not happened yet, and we still have to venture out into the real world to take our own beautiful photos. There’s no better location for exploring the world of night photography than San Francisco. Learning the ropes for night shooting can be tricky…that’s why we started the Aperture Academy, and that’s why Scott Donschikowski and I were in a van with a small group of eager photographers on a Friday night.

We like to spend as much time as possible in the field, so we keep orientation short. Our first stop is the Palace of Fine Arts. I love this building. It reminds me of being somewhere in Europe. With the reflection pond, and the wonderful architecture, it’s a great place to get started and go over some of the ins and outs of night shooting, and some of the challenges as well when dealing with high contrast situations. 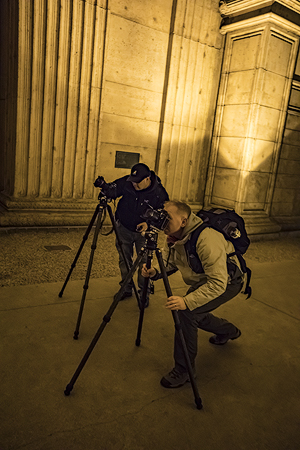 With a small group, it doesn’t take too long before everyone has gotten some great shots of the building and reflections…we’re ahead of schedule, so we move the group underneath the dome to grab some shots of the awesome symmetry and textures.

Our next stop is Lombard Street. Here we work on long exposures with the goal of getting headlights and taillights to streak…this is a natural occurrence that happens with longer exposures. Anything moving during the exposure will streak…and because the lights are the brightest part of the subject, it’s all you see in the final image. In addition to shooting from a couple vantages on this awesome curvy street, we got to see an idiot on a moped wipe out because he tried to get fancy on his rented scooter.

One of the more iconic shots in the city is the Embarcadero and the view of the Bay Bridge…it’s a shot that a lot of people have…but it’s still awesome to get your own version, and see it manifest itself on your view screen. I think so many people have seen that image somewhere, and to finally be able to say, “Wow I know how to make that shot now!” Is awesome.

No trip to SF would be complete without a stop at the Golden Gate. We hit up the Fort Baker fishing pier for a little less iconic view of this historic bridge. The water in the bay was fairly calm, so the reflected colors really showed up well in the images the group got…we also got visited from a seal lion who was out showing his ‘night owl’ support.

San Francisco never disappoints…and everyone came away with some great images. Scott and I enjoyed the smaller group, and getting to know everyone. Hope to see you all down the road in the future!