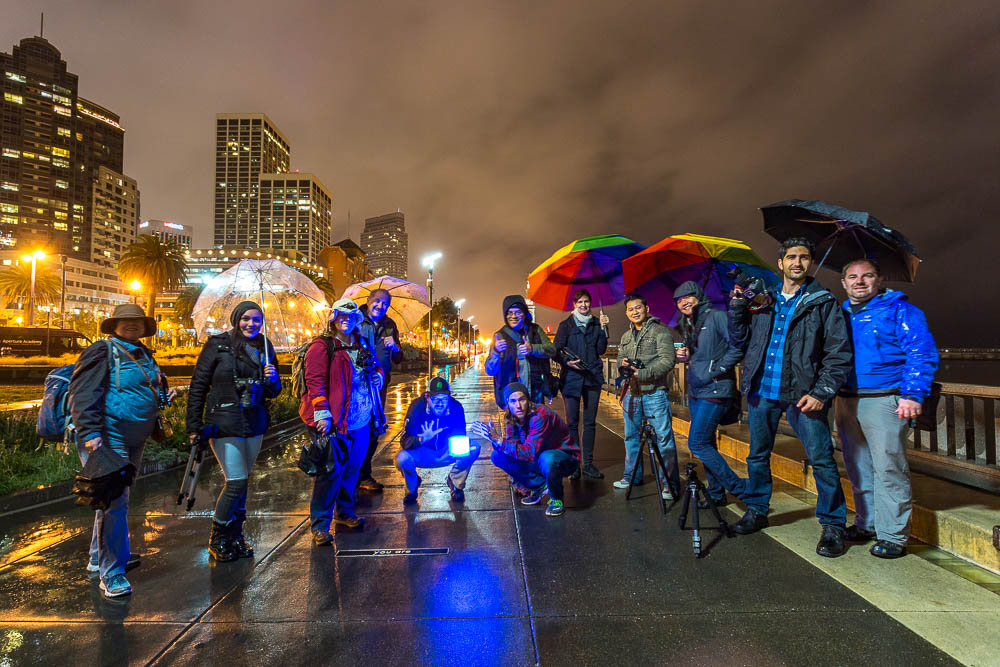 To say San Francisco has crazy weather is an understatement. Even when rain is on the forecast, if the percentage of said rain is less than 50%, it’s really still a good chance that there will be none. This makes it a great opportunity to demonstrate that photography is as much about trying to work with the weather as it is trying to find that memorable, amazing set of conditions.

For this workshop, Phil and I met a group of 10 eager photographers on a Friday night under what looked to be ominous skies. After a brief orientation, we loaded up in the van while being drizzled on, and then set off for the Palace of Fine Arts.

This piece of architecture is great; they light it at night so in the twilight hour the blue of the sky mixes with the oranges and gold of these lights, and the combination is stunning. By the time the class was set up to shoot, the rain had ceased, and the place looked as good (or better) than it does without the rain. The wind stopped, too, and our reflection returned, and the view was just amazing! Phil and I helped the students learn, or brush up on, core features and basics, such as aperture, shutter speed, ISO, and of course, white balance...this is a big key to getting shots to look like the incredible colors we saw with our eyes.

The class really got some nice shots, and as the light began to fade to a darker shade of night, the contrast in our scene was increased, so we covered ways to deal with that exposure-wise, as well as with post-processing solutions to get the most from these great views. 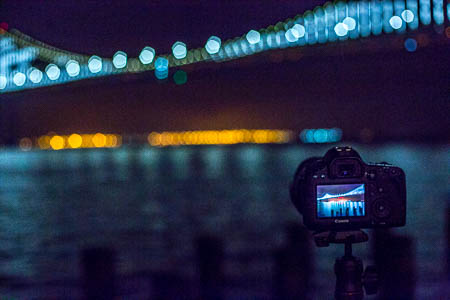 The next stop was the Embarcadero for the Bay Bridge. We opted to try and skirt the rain as best we could and make sure we hit one of the best stops of the night during a lull in the rain. A slight drizzle fell while we photographed, but nothing an umbrella and a little cover couldn’t fix. We stressed many of the same settings there that we covered at the Palace, the only difference was that the light from the neighboring Oakland area gave the sky a really fantastic glow on the horizon…the cloud cover also acted as a natural bounce light and gave the whole scene another level of depth. We shot vertical, horizontal, and really worked the compositional elements!

Our next stop was the twists and turns of the world famous Lombard Street, where we had the group shoot the road a couple ways... from the middle looking up, so we could focus on the headlights coming down the road, and from the top looking down, where we photograph the bright red taillights meandering down the curvy road.

The rain kept most of the tourists at bay, and while it’s nice to see popular locations WITHOUT them, we do need some tourists for this particular Lombard shot to work right, so we had fun joking about the long gaps between cars. But, thankfully, enough travelers came through to get the effect we wanted, and everyone was able to get the best of both angles.

My group tends to shoot longer exposures, and we work with some live action dodging and burning…it’s a little bit interactive, but that’s what makes photography fun, that ability to try out new techniques to get the most of a scene.

By the time our groups had shot each location, the rain was returning again with a slightly increased focus. However, we had successfully done what we came to do and were fine with packing up at that point. It was nearly midnight and we’d been able to shoot each spot on our class, and to get some spectacular visuals. We did try to make a stop at the Golden Gate on our way back to Sausalito, but the bridge was playing hard to get with Karl the Fog, and there wasn't enough to capture. So, no Golden Gate on this night…but the class definitely got the techniques needed to be able to shoot the bridge when they decide to go out on another night in the city. And what we did get was very satisfying... it was a fun night!

Brian, Phil, and the rest of the Aperture Academy Team