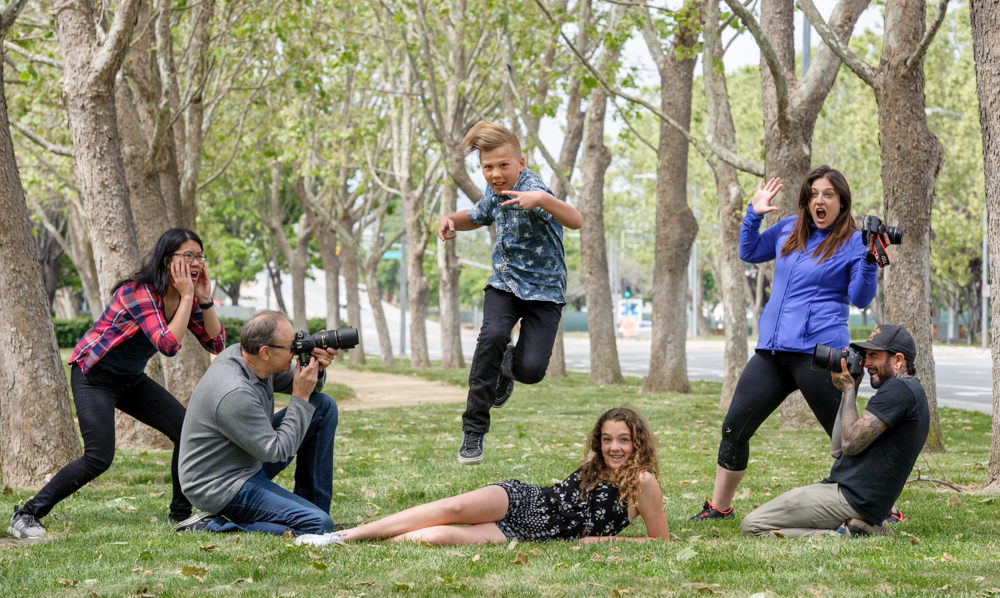 As a portrait photographer, I am very lucky to have worked with some amazing people in the past years. Whether I was photographing a wedding, engagement, or a family portrait session, I have truly enjoyed the time I spent with my clients. This Saturday was no different. During our Natural Light Portrait photography class, I took three students out to share that same joy. After our review session indoors on exposure, composition, and equipment, we headed out to photograph not one, but two models!

I have worked with our model, Kayla, in the past so I was excited to see her scheduled again. But much to my surprise and delight, her younger brother Andon decided to join as well. This was particularly exciting because the dynamic of the photoshoot changes when photographing two people interacting with each other. There are pros and cons to the situation: it is easier for models to be relaxed when there is a familiar presence, but the photographer also needs to be more attentive to posing and interaction. 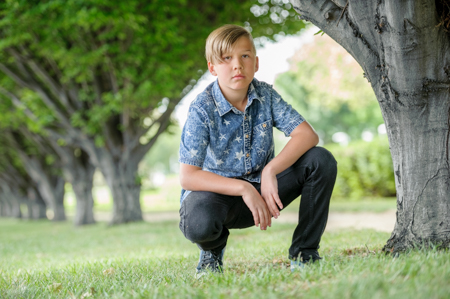 Being brother and sister, I wanted the students to practice photographing the duo together rather than separately. This was also a great way to experiment with depth of field and see the issues with shooting wide open. One of the most common habits is when photographers get comfortable shooting with f/2.8, f/1.8, or f/1.4. While this might work when photographing one subject, it definitely will cause issues with a pair. We have to consider an aperture that will get both Kayla and Andon in focus. A trick is to have them positioned side to side on the same focus plane, but not all poses can be done in this way. When we had Kayla hug Andon from behind, I recommended the students change their aperture to f/5.6, especially those who were using a telephoto lens.

When it came to posing, these two were naturally goofy and loving with each other, so some of the best shots came at moments when they weren’t given any direction. However, we also experimented with several stronger poses both together and separate. Surprisingly we photographed a lot of shots at a low angle, which usually is not flattering for people. But the low angle does give the photo a sense of drama and power, which was perfect for Kayla and Andon’s back-to-back pose. 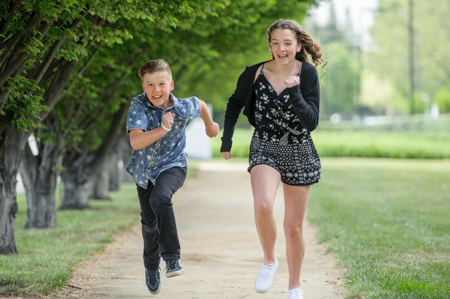 One of the best experiences I’ve had teaching this portrait class came next. When photographing moving subjects, our focus settings must be changed. In Nikon, you switch it from AF-S to AF-C, and in Canon, you would go from shooting in One Shot to AI Servo. This will allow the camera to continuously focus on the subject as long as the point remains on them. Normally, we would have models walk down a path—spinning and twirling while our students snapped away. But this time, with Kayla and Anton feeding energy off each other, we had them race instead. Yes, they ran. At. Full. Speed.

The results were amazing! Not only did each frame capture their speed, but it showed their joy in competing against each other—one that is easy to identify with if you have a sibling. After ten minutes of breaking a sweat, I broke the students up into two groups: one photographing Andon, and the other two photographing Kayla. It was amazing to sit back for a bit and watch the students at work: posing, directing, and interacting with our young models. With constant practice, I have no doubt they will be able to photograph anyone in any situation.