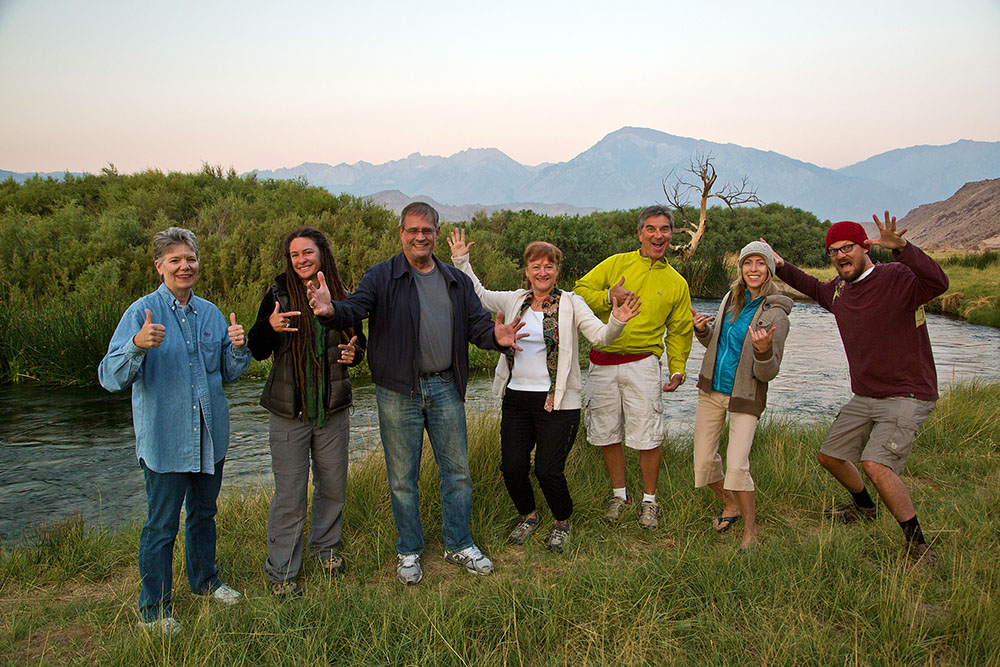 There are several iconic mountain ranges in the United States, and the Eastern Sierra is arguably one of the best. Stretching from Just south of Mt. Lassen through California, crossing Lake Tahoe, Yosemite NP, Kings Canyon NP, and ending near the Mojave Desert. The Tallest Mountain in California, Mt. Whitney lies within this range. Two of the largest hiking trails in California, The John Muir Trail, and Pacific Crest Trail traverse large chunks of these mountains. Anyone who has witnessed sunrise or sunset in these mountains know it is called “The Range of Light” for a reason. In addition to the millions of visitors each year that find themselves within these it draws in photographers as well…all coming to see a portion of these amazing mountains.

I met a group of six photographers in Bishop, California for two days of exploring a small section of these amazing mountains and working on learning the basics of star photography high in the Bristlecone Pine Forest.

Our classes begin early, so at 4:15am on our first day we set out south to Lone Pine, California and the Whitney Portal to see the tallest mountain in the Sierra Range from some of the most bizarre rock structures in the State and watch the first rays of morning light paint the mountains through a stone arch. 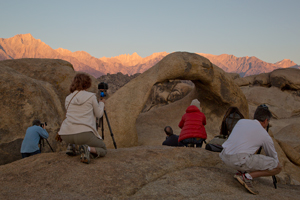 The Alabama Hills is a relatively small area of bizarre rock formations. Popular with rock climbers and photographers alike, it is also been a featured shooting location that requires any scene with bizarre, otherworldly, desert landscapes. You can imagine this includes a large array of film, and commercial work. I tell my classes, “Once you SEE it, you'll recognize it forever in movies and commercials.”

In the twilight of morning our group hikes out to possibly the most famous location within this area. Mobius Arch. This stone arch not only has one of the most bizarre shapes of any rock…it also has a view of Mount Whitney through the arch. The group takes spots on the side of the arch, looking through towards the mountains. With a group of 6 everyone, with a little creativity, is able to find a nice vantage point. I help them get started with the settings, help polish up the compositions, and then we wait for the light. 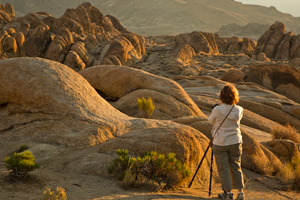 The mountains start to glow with pink long before the sun actually rises…and this pink intensifies as the sun starts its journey above the horizon. It's a textbook definition of the phrase “Alpen Glow.” This glow when framed within the confines of a stone arch is amazing.

After the sun has crested the eastern mountains there is still plenty to explore in the Alabama hills, and we spend the better part of the next two hours exploring different vantage points, working with the lines and curves of the rocks to help act as leading lines for the composition. We also find some great barrel cacti that can be used as strong foreground elements to work with the mountains, or as a way to shoot shallow depth of field and place the focus on an interesting shape like the cactus, and let the mountains blur. The viewer still recognizes the location, but the shooter has deliberately switched the emphasis of the shot.

The sun is now starting to warm us rapidly, and it's time to make our way to one last stop in the morning before taking a break. We hit one of the many farmers' ponds in the Owens River Valley. These hard to find ponds often offer several chances to use water in compositions and capture some reflections of the mountain ranges, as well as use some of the interesting foliage found within these ponds…which can also make interesting compositions by themselves.

Time Flies…and by the time we return to the hotel, we've been out in the field for nearly seven hours. Everyone has earned a nap, and chance to recharge their batteries. We meet again in the evening to shoot sunset, and hopefully some stars.

After a brief stop for some lovely homemade burritos we head high in to the White Mountains to the Bristlecone Pine Forest and the Shulman Grove. Here we test the limits of our high altitude breathing and make our way up to a elevation over 10,000 feet to a couple great, gnarled trees. The light is starting to change as we arrive, and the storm clouds in the vicinity are turning magical shades of orange. Here we work on higher apertures for depth of field as well as turn our white balances to shadow settings to really bring out the warmth in the clouds and the trees.

It's a great sunset, and our night has only just begun…as is typical in this are during the summer storm/ monsoon season these storms build throughout the day, then dissipate as the sunsets, leaving a sky filled with stars. While we wait for the stars we enjoy a glass of wine and everyone has a great time laughing and trying to stay warm (the wine helps)

Once it has gotten dark enough that we can see the stars with our naked eyes, we begin the process of shooting. We practice light painting and shooting pinpoint stars, as well as using some longer 5-minute exposures that we will use for blending later as star trails. One of the highlights of the night was a MASSIVE shooting star that blazed across the sky so brightly we saw it explode and the trail of smoke it left behind. 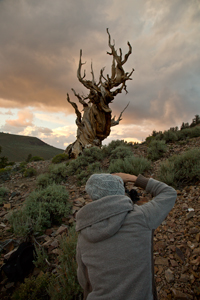 Unfortunately as the start trail shots began to happen, the clouds decided to make a return appearance…and the more clouds that arrived, the less chance we had at having successful star trail shots…so we did the best we could with the 7 or 8 shots we were able to gather, and decided to head back to the hotel.

Morning two we met at just after 5am and departed for some curves along the Owens River with nice views of the Eastern Sierra and of course that magical morning glow. I helped people dial in their compositions, and we got some use with the polarizing filters as well as the graduated neutral density filters to help balance the sky with the darker river.

Because of our late night, we opted to take a break after our sunrise shoot and head back to the hotel where people could eat a nice breakfast, and catch up on the sleep they lost the previous night.

We met just after noon for a couple hours of processing work. I showed the class how to blend the star trails, and despite the clouds the shots still worked pretty well and everyone was able to see how the technique works. Part of shooting is learning the techniques and concepts so that when conditions are perfect you're ready for them with knowledge. 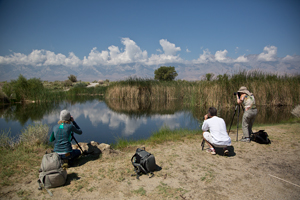 After processing we set back into the wild to check out a place called “Buttermilk” this area is similar to the Alabama Hills, but offers what I think are more distinct separate formations to shoot…which combined with the polarizers and lovely sets of white puffy clouds in the sky made for some tremendous images that will look great as is, or processed in a monochromatic technique.

From here we set off to check on some other farmers' ponds in the Bishop area, though we had the great sky, we had too much wind so the reflections we hoped to shoot were not there…but we got some nice images of trees hit with warm afternoon sun in front of a dark brooding sky…which I thought were quite lovely.

Dinner was next, which was interesting for some of us…bowling alley spaghetti feed anyone? Then it was off to Lake Sabrina and North Lake to try and capture a little of the evening light on the clouds.

North Lake was our final destination, a location I like because it often has much calmer water than the other nearby lakes, which is great for reflections. It also has a nice vantage looking east, with a few peaks that can be used in the images. SO often shooting sunset from the eastern slop of the Sierra is difficult as the mountains do not get much evening light…this location offers some chance for light on the peaks, as well as a chance to get some nice color in the clouds…luckily we were patient and got some nice pinks in the sky towards the end of sunset.

One of the other things I like to teach here is how to do some abstract panning during shooting. There are a few really nice aspen groves here and they are perfect for demonstrating this impressionistic photography technique.

Unfortunately this technique is best learned in light. Not darkness and that was what we were facing by the end of this class. We packed our gear, headed back to the van and made the short drive back to Bishop. It's always hard to say good bye to such a fun group. We had crazy weather, stars, sunsets, sunrises, and a whole lot of fun along the way. Everyone got to learn a few new tips and concepts about shooting, as well as experience some of the most impressive gas station cuisine in the state. Not too bad for a couple days in the middle of a week!