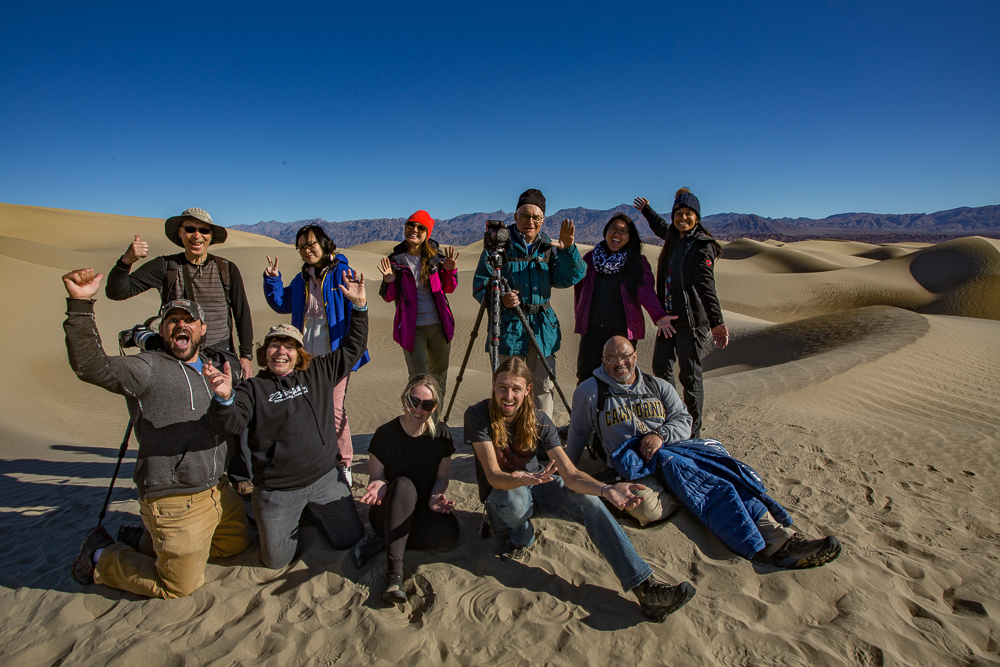 Death Valley National Park is one of those places that isnt on too many peoples radar. I think people know about it, have maybe even driven though it a time or two, but havent really explored around outside of the radius of their car. And thats what makes Death Valley a special place. The National Park system, in recent years has seen a huge increase in tourism across the board. Death Valley too, has seen such an influx, but the difference there is, most of the really cool stuff is off trail and sometimes hard to find. Death Valley is also one of the few National Parks where despite the influx of tourism, its still relatively easy to find places that are devoid of human life, and they arent a day hike away!

Every winter, Aperture Academy visits Death Valley National Park on the regular. This trip was our third in two months, proving that Death Valley is as popular as ever! On a weirdly windy night in March, fellow instructor Mike Wardynski and I met our group in the Furnace Creek Ranch for our usual round of introductions. The wind was quite gusty, which was unusual weather for the park, but as we explained to our group, Mike and I were ecstatic, for reasons which we would make clear on the second day of our workshop. With everyone eagerly awaiting the next days shooting schedule, we went off to bed and tried to grab some sleep for the long day ahead of us. 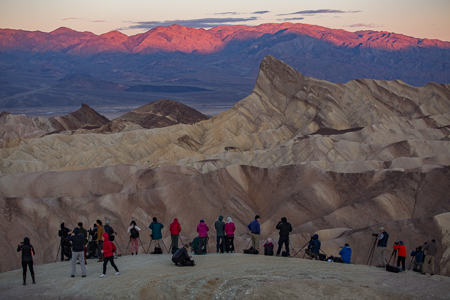 Our first morning we started off at Zabriskie Point. Its probably the most visited overlook in the park, second only to the Mesquite Sand Dunes. But the vantage point there overlooks a maze of warm multicolored alluvial fan mud stone formations, striated with layers of brown and yellow. As we setup awaiting sunrise, a beautiful pink glow illuminated the horizon in front of us and everyone snapped away like mad, while Mike and I hurriedly bounced around to everyone, giving advice on exposure and composition. After the magic was over, we focused on zooming in on the layers and layers of the yellow alluvial fans, before the wind and cold drove us back to the van. After a short break for breakfast, we piled into the ApCab once again and drove out to the ghost town of Rhyolite, where we spent the next few hours shooting amongst the old buildings and cars scattered about the once booming mining town. Once everyone had their fill, we drove back into the park and all the way down to Badwater Basin, where the salt formations are. Mike and I, having scouted many locations, took our group to what we thought were best and most easily accessible of these awesome polygons. It was a feeding frenzy! The clouds looked ominous, and provided us with some interest in the sky, that paled in comparison to the usual flat clear blue. With careful positioning to the get the best looking foregrounds, we shot through the sunset and finally packed it up once it started to dark. 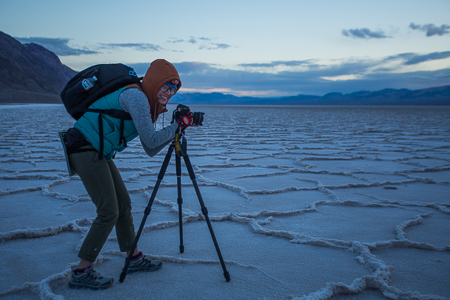 All the wind, though annoying, can be awesome! The Mesquite Sand Dunes are also one of the more popular places to visit in the Death Valley. The problem is footprints. They are everywhere! So in the years past we started taking our group further out into the dunes to try and avoid such compositional killers. And the windstorms that had racked the park in the previous days proved phenomenal in giving the sand dunes a clean slate for our group. We walked out in the dark before morning, and setup our group on a couple higher dunes for sunrise. We had the clear skies that wanted for the contrast between the dune faces, and for a couple hours we let the group splinter and explore to their hearts content. It was an amazing morning! After taking our group shot among the dunes, we headed back to our hotel for a little R&R before meeting up again in the afternoon to do a couple hours of post processing. Once that once done, we took the remainder of our group out to Badwater again for a second go round of that amazing place. Lighting did not strike twice however, and the sunset was a little lackluster compared to the first day. But no matter, the salt flat looks pretty amazing under any circumstance, and the best part was we were completely alone! Not a soul in sight for miles, I think thats why Badwater is the folks favorite spot on the workshop. As we dropped everyone off at the hotel, Mike and I said our goodbyes to everyone, and said farewell to Death Valley as well, another great winter of workshops in this gem in the desert!