Death Valley... Sounds like a pretty scary place huh? I suppose it could be if you were to visit in the middle of July when the temperatures can reach over 130 degrees. Yikes! Fortunately for us, Death Valley is actually a really pleasant place to visit in mid January and it just so happens to be one of my favorite National Parks. It offers a wide variety of landscapes to photograph that look nothing like one another, making it one of the richest places to photograph in California.

The first stop on our workshop was the classic Zabriski Point view. We made sure to wake up rather early in order to ensure choice tripod location. I showed the group my two favorite angles to shoot from and then rattled off a few settings to try out. The sun began to rise and a nice soft glow began to illuminate the sky and mountains in the distance. Once the sun peaked over the horizon, we isolated some textures with our telephoto lenses. We then packed into the van and headed around the mountain to Artist Drive where we photographed mountains that almost resembled pastries more than earth. We shot the location until it was in direct sun, and at that point it was time for a quick break back at the hotel.

We then continued our adventure into Nevada where we visited the ghost town of Rhyolyte. It was a short lived mining town that was built in the beginning of the 20th century. There is not a lot left of the town today, but the few buildings that do remain make the trip worth it. There are a lot of different compositions that can be found here, so the group spent two hours digging around. Around 2:30 we headed back to Death Valley to shoot Badwater Basin. Bad Water is one of the most interesting salt flats in the world, so it is no wonder why people travel from all over the world to photograph it. After a somewhat rough hike out to the flats the group looked for interesting salt formations to use as their foreground. There were a decent bit of clouds in the sky and it was looking like the sunset might light up pretty nicely. As the sun dipped, we began to see hues of gold and pink start to form. Before we knew it, there was color all around us! The group soaked it in and had time to try a few different compositions in the incredible light. Once the light had faded we put on our headlamps and headed back to the ApCab. 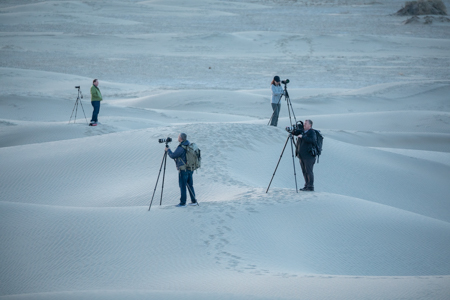 The next morning we left the hotel a little earlier so we would have enough time to drive to Mesquite Dunes and hike out to a good shooting location. After about a half an hour hike we made it to a nice set of dunes that we shot with wide lenses for sunrise. Once the sun began to rise, we switched to telephoto lenses in order to isolate the textures within the dunes. Watching the sunrise from the dunes is one of my favorite things in the whole world. We shot for a good hour after sunrise and then made our way back to the hotel where we had a break before doing a little bit of post processing. After post we went back out for one more shoot. Since the light was so good at Badwater the first night, I decided to take the group to some mud tiles that are a little more off the beaten path. There were clouds in the sky again, so it looked like the sky might light up two nights in a row. With our fingers crossed we watch bands of color reach across the sky in hues of pink and purple. The group was excited to see excellent light two nights in a row. What a way to end a workshop! I drove the group back to the hotel where we said our goodbyes until the next time.

We provide the best photography education experience on the planet -- Hear What Our Customers Say or Leave Us a Review.
More photos below comments...