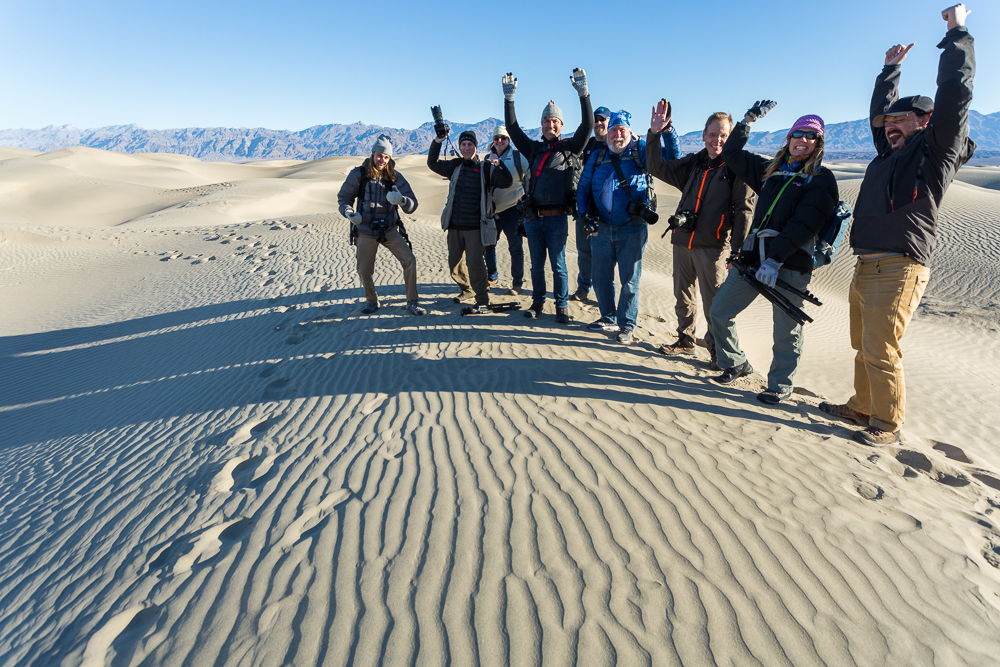 Death Valley National Park has been acclaimed for its remoteness, extreme temperatures, and lack of water. Whilst on route to find gold during the California goldrush of 1849, a group of European-Americans coined the term Death Valley, and the name simply stuck. Although the valley doesnt really live to its name, as many flora and fauna survive here. Including the odd photographer. But we wont be visiting when heat really kicks in. In the winter months, water from rain and snow melt can be prevalent in the valley, leading to standing water and even wildflower blooms. Its truly an amazing place to get lost in the beauty.

So lets discuss the trip! First off, as per usual on the night before our workshop began, we come together and have an orientation to introduce everyone to the instructors who happened to be Mike Wardynski and myself (Scott Donschikowski). As nearly everyone who who joined us for the workshop was a returning student, we spent some time catching up with everyone and reminiscing about past trips before diving into the weekends events. After that, it was bedtime! 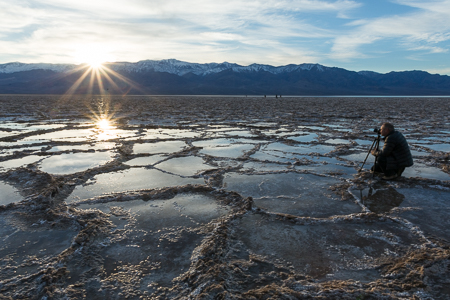 Winter workshops are great because we really don't have to wake up extremely early to catch sunrise. Our sunrise spot for the first morning also was just a short drive away. Zabriskie Point in Death Valley is the perfect place for sunrise as it faces west and allows the sun to rise behind us, illuminating the Panamint Mountains with a beautiful pink hue once the sun clears the horizon. There was no significant cloud cover during the shoot, however, the air glow of the moisture just above the mountains was enough to light up that part of the sky with a faint purplish hue. After the sunrise, we spent a lot of time working the compositions of the alluvial fans in the area, using the light and dark of the suns casted shadows. After a brief morning break for a nap and some breakfast, we reconvened and made our way out of the valley and into the state of Nevada for different kind of desert photography, Rhyolite is a small ghost town just outside the park border and was once a mining boom town at the turn of the last century. Many of the buildings have been removed, either by the effects of time or for the reuse of the materials, but the ones that still stand, provide a reminder of the history of the area. Mike and I let our group collectively explore the townsite, and spent our time working with them on using the buildings with their surroundings to make interesting and otherworldly photos. Rhyolite is place where photography can flourish as a storyteller. Using the environment to highlight a narrative which the photographer wishes to convey. So there are tons of possibilities there. We funneled people down the road to the Goldwell Open Air Museum, where the whimsical modern art sculptures took the photographs in a completely different direction. After an hour drive back into Death Valley, we arrived at our sunset spot for the evening, Badwater Basin. Due to some serious rains that have wet the California landscape, the salt basin was flush with standing water, a rarity in a place that is the hottest, driest, and lowest place the continental US. Mike and I wanted our photographers to take in this rarity, so we chose a spot deep in the salt flat where the standing water would allow us to see the reflections of the Panamint range and the sky above. A few high clouds joined in on our fun and made for spectacular sight during the sunset hour. As the sun drifted behind the mountains it illuminated our new cloud friends in brilliant warm colors, which were then reflected in the water below. It was a resounding success. 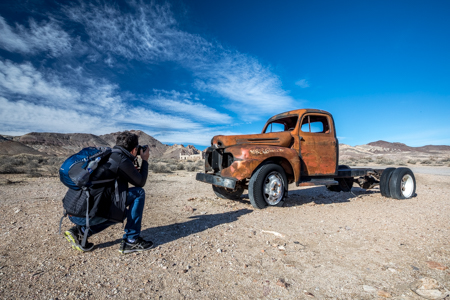 Our second morning had us driving out the sand dunes near Stovepipe Wells. We walked out under the stars to the middle of the Mesquite sand dunes, where upon the sun rising over the mountains to the east, provided our group with an amazing display of golden color on the sand. The light and shadow created by the peaks and troughs of the sand dunes was our subject for the morning and like kids in a candy shop, our group happily traversed the desert sand looking into each nook and cranny for the perfect shot. The way the light dances around the dunes is magic, and Mike and I helped our group to take pictures ranging from the abstract to the grand view. After a couple of hours, we returned to the van and set course for the Cottonball Marsh. Death Valley is not known for its abundance of water, but this time of year, when storms are more prevalent, water exists in many places. One of the more weird and unnatural places in the park to photograph, is this marsh. A flat sea of clay and water exists as far as the eye can see, with little tributaries dancing at around the marshes edges. We spent some time working with the bending rivers and golden scrub brush before returning to the Furnace Creek Ranch for some midday food and rest. 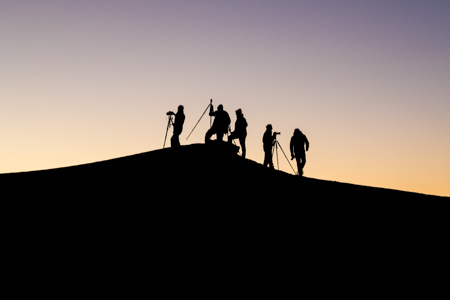 After a couple hours of post processing, where Mike and I worked with some of the group on composition and processing in Lightroom and Photoshop, we returned to the salt flats of the Badwater Basin for sunset. This time we took the group to a more "pristine" area of the salt flat, which was all but devoid of water and the super white crystalline structures, indicative of Badwater Basin, were on full display. Again some high clouds joined in on our fun, and provided some interest in the sky, to add to the already brilliant scene at our feet. We help the class in using graduated neutral density filters, as well as helping them to find a composition that best balanced the crystalline formations against the colorful sky. Once the light show had subsided, we made the long trek back to the van and returned everyone to the resort at Furnace Creek with a couple more awesome photos from our adventure in this amazing national park!