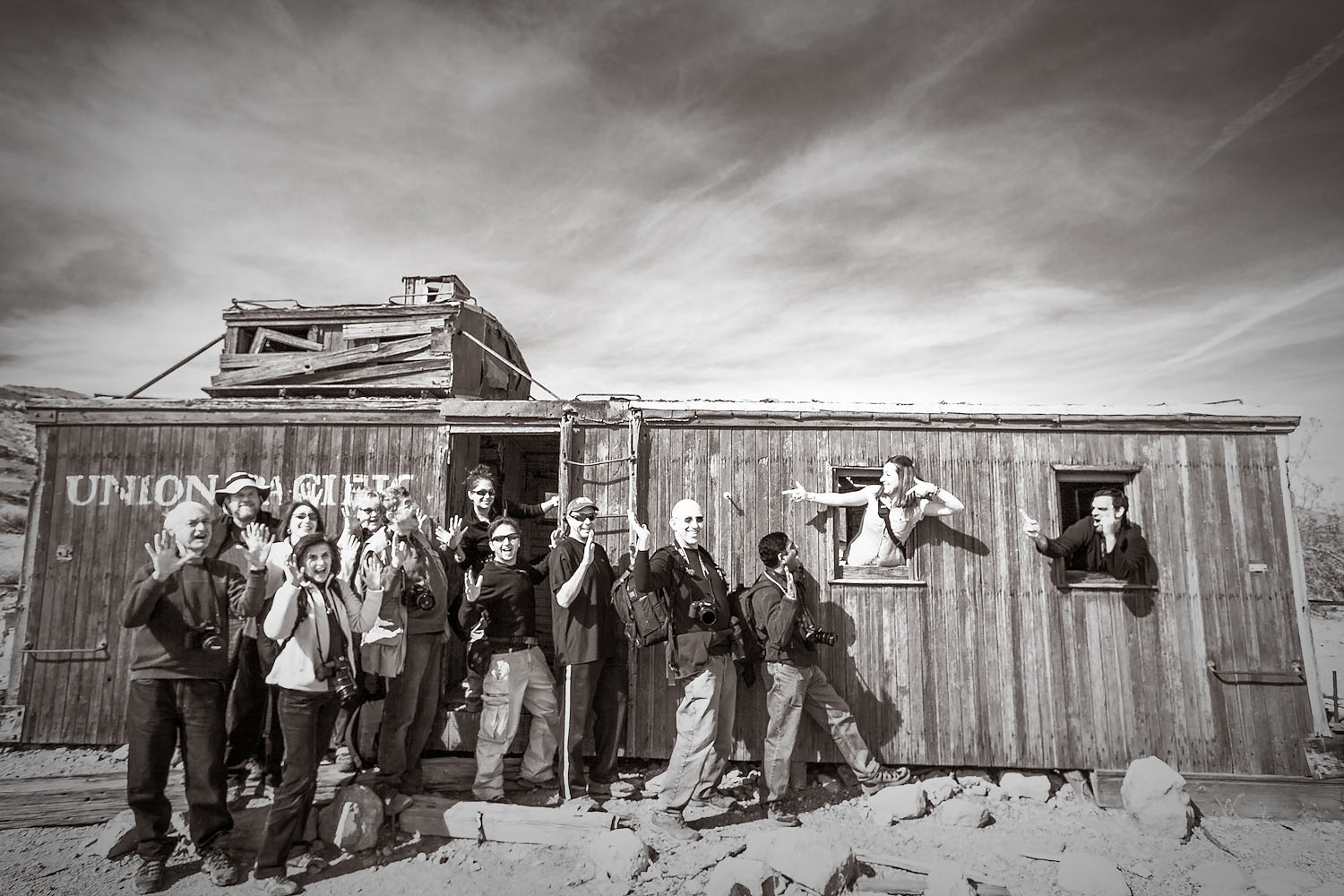 Death Valley National Park is the lowest, hottest and driest location in the entire country. It is known for its extreme temperatures, sparse life, and large expanse of wilderness. The extremes of nature here have been hard at work for eons, carving, eroding, and upsetting this landscape to form some of the most beautiful and unique photographic vistas. From the depths of the salt basin, to peaks of the Panamint Range, Death Valley is a gem, hidden east of the California Sierras.

It is here then, at the Furnace Creek Ranch, that our adventure begins. The Aperture Academy's Scott Donschikowski and Ellie Stone traded the extreme of Bay Area urban sprawl, to the sprawling wilderness of the desert for an action packed two-day adventure. In typical Aperture Academy fashion — but this time lit by cozy fires and the starlit sky — we began our round of introductions, and laid out the itinerary for the next two days. Scott and Ellie both explained the route, shooting locations, and what to expect from mother nature, as well as getting a feel for the experience level of the group to better tailor the overall workshop for them. 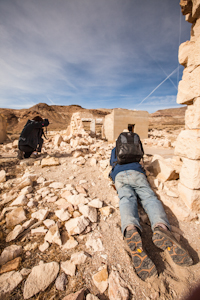 Morning began at an early 5:30am as we packed all the eager students into the ApCab and made our way off into the darkness toward our first spot of the day: Zabriskie Point. A modest hike up to the summit of the paved walkway, the group gathered around and listened to a brief explanation of the sunrise shoot. Using Manly Beacon as our focal point and the Panamint Range as a backdrop, the students eagerly took up positions on an elevated hill and waited for the sun to illuminate our scene.

Sparse clouds to the southwest provided some interest and color for those choosing a wide angle view. The sunrise did not disappoint, the pinkish hues of the Panamint Range, contrasted beautifully with the golden stria of Manly Beacon and as the sun crept higher, we gathered our gear and set off to our second spot: Mosaic Canyon. The 35 minute hike into the canyon provided us with stellar views of beautifully formed, smooth marble walls, making their way up to the rocky and jagged mouth of what once was a great wash for the water coming down from Tucki Mountain. As the group walked in the canyon, it was hard to pry them away from the golden striations of rock, mesquite bushes growing out of the cracks, and the cool white marble walls of the slot canyon at one of the washes turns. Time for a break! With the shadows getting ever smaller, it was time to pack it up and head back to furnace creek for a much needed morning respite.

As the sun made its way west, the light had improved and our students had recharged their batteries enough for us to make our next trek out for the afternoon and evening. Our next stop was Artist Drive, a twisting, turning, roller coaster road through some of the more plentiful colors on the eroded hills of Death Valley. The focal point being Artists Palette, which is a section of multi-hued, volcanic and sedimentary hills. 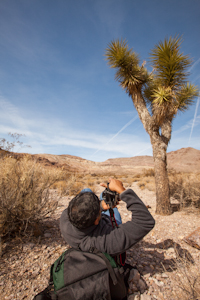 We spent time photographing them in the afternoon sun as our focus shifted to the road, which cut its way through the apron of the beautiful hills. The road provided everyone with a great leading line for their compositions and with the multi-colored hills as a background, the camera clicks were speeding along. 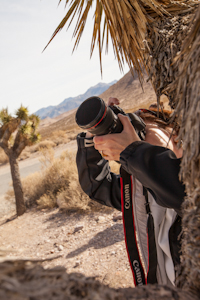 Back into the van for our sunset shoot! As the light was fading fast, we made our way down to the Badwater Basin for a truly extraordinary sunset. With a 15-minute walk to a spot on the basin, where the polygons are highest, we had everyone setup and find their compositions before the light was at its peak. The amazing polygonal formations are formed by the heating and cooling of the basin, which pushes up the salt to form ridges, which encircle the flat polygonal shape in its center. With a section of clouds in the sky providing some awesome light, our group happily clicked away as Ellie and Scott jumped around and instructed them in the use of filters to get the best possible shots in the fading light. As the light began to fade into darkness, our group packed up and headed back to the van for the short trip to their rooms and computers to see the day's bounty.

Morning comes too quickly when you have to be up for sunrise colors in the valley. Again we began at 5:30am to make our way back to the Badwater Basin to photograph in a different spot for our sunrise shoot. 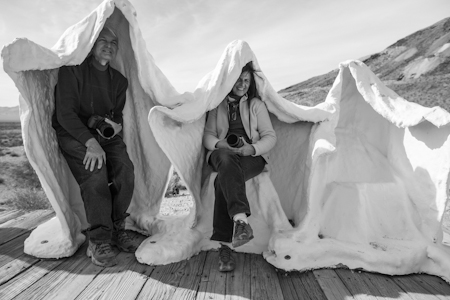 This time around, we made use of the prevailing light on the Panamint Range, to add some pinkish hues to the vast white salt polygons in a northerly arm of the Batwater Basin. This time the hike was pretty short, a boon to our early risers, who setup quickly and awaited the majestic sunrise. We stayed with the polygons for a time, all the while Ellie and Scott pushed our group to find new compositions and use their newfound skills from the previous night on the basin. After a couple hours photographing the basin, we headed back into Furnace Creek for a morning break, to allow our group to get some breakfast and pack up and checkout, before we headed out again to our next stop: Rhyolite. 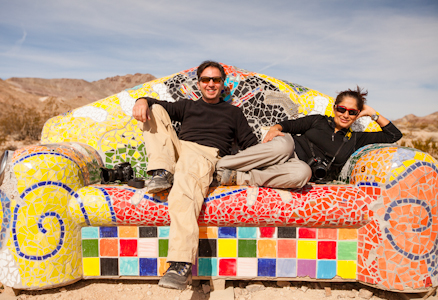 The ghost town of Rhyolite is a chance for our students to get out and explore one of the many boomtowns of the American West. Rhyolite was once a sprawling city of more than 10,000 in its heyday, in the early 1900s. Now most of it lies in ruin, and with the backdrop of the desert hills and tumbleweeds, it provides some of the best photography in the area. Ellie and Scott once again explained how to approach this different landscape from the point of a photographer. 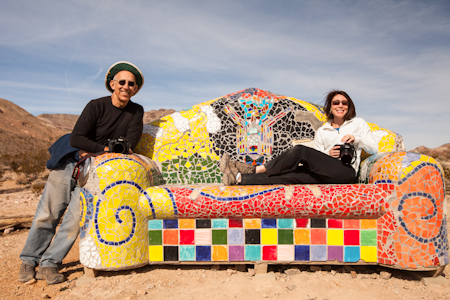 Using storytelling to provide a snapshot into the past of the American boomtown, the students were free to roam the streets and surrounding ruins to capture little scenes for when added up, tell a larger tale of what once transpired in this amazing hamlet. With all the exploring and shooting, our group was working up an appetite, and with lunch approaching, we packed up and headed for Beatty, Nevada, for some lunch and reflection on the past day's activities.

With sunset approaching in the west, we then headed back into Death Valley for our final shoot of the workshop: The Mesquite Sand Dunes. They get their name from the plants that sprout right out of the sand itself, which also adds some welcome greenish hues to those compositions of the dunes. Ellie and Scott led the group out into the dunes to a spot that provided a great composition for the evening light. As the shadows crept ever longer and hues became ever warmer, our students snapped happily away at the spines of the curving dunes. Once the sun eclipsed the Panamint Range behind us, the entire landscape turned to shadow, signaling to the group that it was finally time to pack up and head for home.

Arriving back in Furnace Creek, we offloaded our intrepid group of photogs, exchanged emails, tips on shooting locations, and closed the books on another successful Aperture Academy workshop!

Until next time... Scott, Ellie and the rest of the Aperture Academy Team!