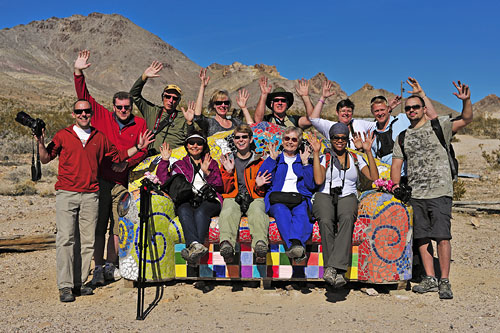 Death Valley National Park is one of the most unique, unusual and inhospitable places on the planet...it's also one of the lowest elevations in the United States. Plus, just the name sounds cool, "Death Valley", lending even more mystery and the desire to explore, and PHOTOGRAPH!

A group of adventurous photographers met the Aperture Academy instructors Friday night for an orientation where we get to know one another and go over the itinerary for the weekend. With an early departure of 5:45am sharp the group turned in for a good nights sleep.

Saturday's first stop was one of the most impressive locations in Death Valley, the sprawling Mesquite Dunes. With just enough twilight to see the crest of the dunes, we made our way out and setup atop of of the larger dunes, with a majestic view of the grand dunes to fill our view finders. We spend about 15-20 minutes working on compositions as we waited for the sun to rise and cast it's early morning warm light which creates depth and enhances the texture of the sand.

With our fill of a variety of dune landscapes, we packed up and headed for a quick coffee and bathroom break before going to our next stop, Mosaic Canyon. This canyon isn't very long but it is full of twists and turns with every bend a discovery of some next colorful texture, as the name "Mosaic" emplies. 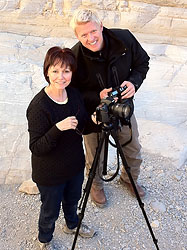 With plenty of battery life left, we made our way out to the Ghost town of Rhyolite -- a bizarre set of structures and "artifacts" that lead you to believe that the final residence suffered from a bit too much desert sun. I wont elaborate too much as this place really must be seen to be believed. Let me just say that it makes for some unusual photography opportunities, especially given you're literally in the middle of nowhere!

Hunger was setting in and the morning light was giving way to that harsh mid-day flat light so we headed back to Furnace Creek for lunch and some downtime, giving everyone a chance to rest, charge batteries and preview the numerous images captured from the morning session. 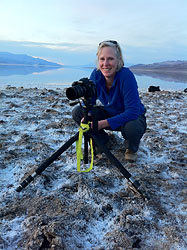 That afternoon, we packed up the group and headed 282 feet below sea level...yeup, it's time to shoot at Badwater! However, mother nature had other plans for us...as we arrived we discovered that the typical hexagonal shaped patterns on the salt flat were covered in about 6 inches of water! A new lesson for the group today -- adapt and shoot! So, we made our way along the "shoreline"...I'd never seen Badwater like this, ever! We found a little finger of land that stretched out into the "lake", allowing us to shoot in just about every direction. This was great because the sky, both north and south, had promise for some nice sunset colors -- and we were not disappointed. The water was glassy and that allowed the group to work on compositions and juxtapositions that really push the boundaries of drawing in the eye. Just as we thought the sunset show was over, a bit of light made it across the horizon and gave us an extra 5 minutes of some really nice purples...encore, encore! 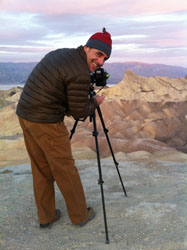 Sunday morning we rounded up the group and headed to one of the most famous overlooks in the world, Zabriskie Point. As we drove we could see some really nice clouds to the west and a clear horizon to the east...PERFECT sign for a colorful sunrise! We hurried out, setup and it wasn't long before one of the best sunrises I'd ever seen at Zabriskie Point lit up. With so many compositions to choose from, we had to work fast and from what I saw on the LCD screens, everyone came away with at least a few winning shots.

With a great sunrise under our belts, we took a "tourist" drive up to Dante's Peak. It's not really a great photography location but is a stunning vantage point to look down from above and get a visual on all the areas we'd been, and still to visit. 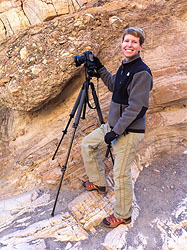 We spent the rest of the morning visiting a few locations along Artists Drive. Scott climbed up onto one of the little hills to lend some scale and perspective to scene while Stephen worked with students to capture the scene in a variety of ways.

After our lunch break we headed to our last stop of the day...The Devils Golf Course. This is one of the most bizarre of all the locations in Death Valley and a great place to shoot sunset, especially with the ominous clouds that were lurking on the horizon. We carefully made our way out into the formations and setup. We worked on using wide angle lenses to accentuate the grandeur of the landscape and shoot some monochrome images to enhance the mood. We also worked with graduated ND filters to balance the sky and foreground creating great tonal range in our images.

With the sunset over, we packed up back into the van and returned to the pub for a celebratory round of beers and dinner. What a great weekend and great group of photographers!

Until next time, happy shooting,

Stephen, Scott, and all of us at Aperture Academy