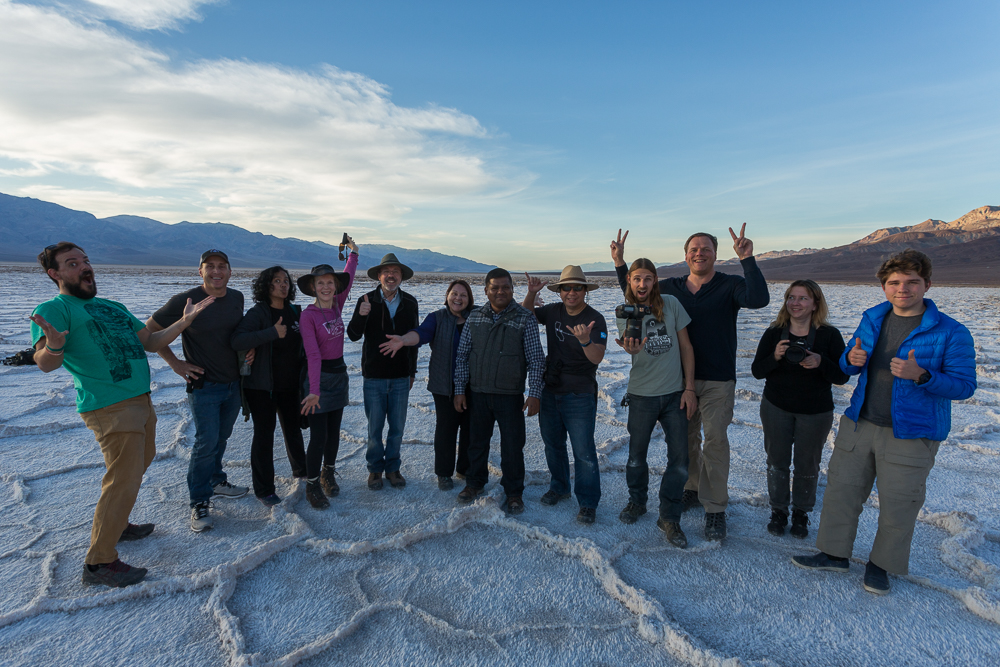 Sometimes I wish I could travel through space and visit another planet. Whenever I get that urge, I head to Death Valley National Park. It is one of the most remote and other worldly places that I know. On February 2nd Scott Donshikowski and I met up a group of ambitious photographers looking to take their craft to a different world. The group introduced their selves to one another during orientation and then Scott and I laid out the game plan. After orientation the group broke and we went back to our rooms to catch a little shuteye.

The following morning the group piled into the “Ap Cab” at 6am and we were off to Zabriskie Point. With just a short walk we reached our destination. The morning light had just removed the cloak of night and all we had to do was wait for the magic to begin. After about fifteen minutes a beautiful hue of pink reached across the sky and the shutters started clicking. Once the initial color faded, many folks decided to switch to their telephoto lenses to capture the glowing orange mountains behind Manly Beacon and before we knew it, bright rays of sunshine were cast across the landscape causing beautiful shadows in every direction. Once the group had their fill, Scott and I took everyone to another great location just a short drive down the road. We racked off a few shots and then headed back to the hotel for breakfast and a little break. 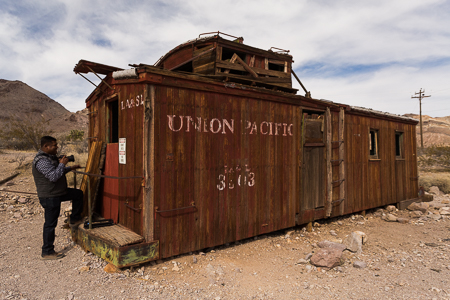 At 11am we met back up and headed to the ghost town of Rhyolite. Rhyolite became a booming mining town in 1905 but had a short life of about six years. Today ruminants of the old way of life make for interesting photographs. The group spent nearly three hours photographing the old remains before we packed up and headed back into Death Valley. Once we arrived in the valley, Scott and I hiked the group out to the famous Badwater Basin which is the lowest point in the U.S. Here, hexagonal salt crystals form to make an other worldly environment. The sky looked promising and as the sun dropped below the mountains, color reached across the sky and we let our shutters go.

The following morning be had a slightly earlier rise since the drive to Mesquite Dunes was a bit farther from the the hotel. After about a mile hike across the dark morning desert we found a pleasant set of dunes to watch the morning light. Once the sun peaked over the mountains, the group switched to their longer lenses again and got to work capturing the contrasting light of the rolling dunes. After about two hours or so the sun was getting high in the sky and we hiked back to the van. 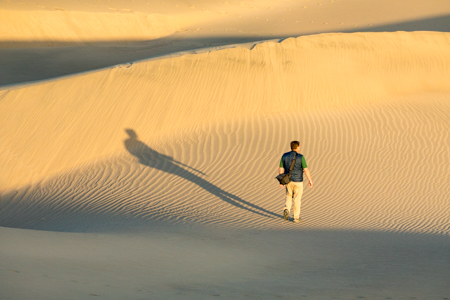 We arrived back to the hotel with enough time to squeeze in some breakfast and a mid day cat nap. At 1pm the group met up with their laptops in hand to do a little post processing magic. Scott and I worked our way around the group as we reviewed a few images and helped with any techniques or questions that the photographers had. Before we knew it, it was time to head back out to Badwater Basin to se if we could top the pervious night’s sunset. On the drive out to Badwater, Scott and I noticed a good amount of clouds in the sky. We crossed our fingers and hiked to a slightly different area than the location we shot from on Saturday. We waited patiently and indulged in pleasant conversation until the sky lit ablaze with one of the best sunsets I’ve seen in a while. Everyone got their shots and we made it back to the hotel with just enough time to watch the last quarter of the Super Bowl. Go Eagles!!!!