It's quite fitting that a workshop in Death Valley starts off sounding like a horror novel...

It was a dark and windy night. Much darker than usual. Black fire pits lined the general store where Aperture Academy was scheduled to meet, but they were void of light, unable to compete with the gusts of wind howling down the valley of Death.

One by one, figures started to appear from the black of night. Is this the spot? A voice cracked. Yes, this is the spot I replied. Suddenly Scott proclaimed, I’m going to go get the lantern, I can’t see a damn thing. On the way back to the van Scott was eaten by a werewolf and was never to be seen again. Ok, ok…. That last part was made up. Scott actually shot the the werewolf with a silver bullet and saved the entire workshop from certain doom.

Once all eleven students arrived we got down to business and started to get to know one another. We discussed the itinerary, answered questions, talked about profound insights, and then went to bed. 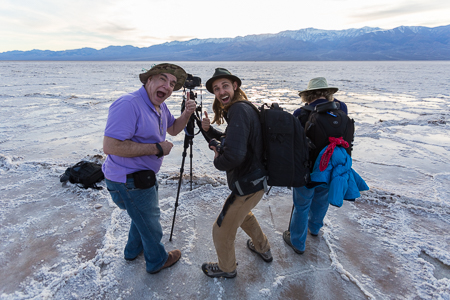 The next morning the group slept in until 6am. After loading up we drove to Zabriskie Point, one of the most spectacular vistas in the park. Everyone set up their gear and waited for those first rays of light to strike the mountains in the distance. Once the scene lit up, it was go-time and the shutters started flipping like hot cakes. The mountains still had snow on their peaks which caught the pink morning glow rather nicely. As the sun rose higher in the sky, beautiful shadows began to give depth to the pleasing lines in the landscape. After a good hour and a half, the group packed up and we headed to Dante’s View to show the everyone the vast expanse of the valley. The group shot a few images and we headed back to the Lodge for breakfast.

At 11:30 we piled back into the Ap Cab and started down the road to Beatty Nevada just in case anyone needed a sub, candy, jerky, or an ice cream cone. Next we were on our way to Rhyolite which was a mining town during the silver rush. Today it is a ghost town consisting of building skeletons and artifacts. We combed our way through the ghost town eventually making our way to the Goldwell Open Air Museum which is a strange collection of sculptures in the middle of nowhere. My personal favorite installation is the rendition of the last supper as ghosts, which is a little eerie in the middle of the desert. 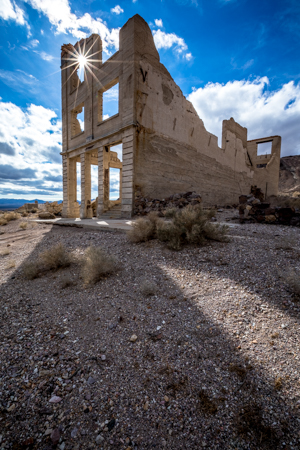 Time continued to slip away as it usually does on these workshops so Scott and I rounded up the gang and headed to Badwater Basin where the group was in for a special treat. It had rained the week before leaving pools of water on the salt flats and making for beautiful reflections as the sun set in the west. Thy sky lit up nicely, slowly fading into night and then it was time for dinner and a beverage back at the lodge.

The next more was a slightly earlier rise since we had a bit of a haul to get to Mesquite Dunes. Once we were near the dunes Scott pulled over in our super top secret spot and we walked the group out to pristine dunes which were mostly untouched by the heaps of tourist that normally go to the parking lot.

The sun rose with a beautiful morning glow to the east making for some great early morning light. As the sun continued to climb in the sky, sexy dune shadows began to appear before our eyes. Some folks switched to their telephotos to compress the shot while others used their wide angle lenses to capture all of the detail at their feet. The group left the dunes excited about the unique shooting experience. I must confess that I’m just as stoked to head the dunes as the students on these workshops. It is truly a blissful location.

We made a quick coffee detour after the shoot and then headed back to Furnace Creek for brunch. After a little rest, the group reassembled at one PM for post processing and image review. Scott and I were pleased to see some of the photos that were taken on the workshop and offered constructive criticism.

Soon it was time to head back out and shoot sunset. We headed to Bad Water Basin once again, but chose a different spot this time. We found a pristine area with clean white salt crystals to use in our foregrounds. The sky was fairly overcast upon our arrival but in true Death Valley fashion the setting sun chased many of the clouds away making for a beautiful pastel scene. Once the sun was down we drove back to the lodge to catch the last quarter of that epic super bowl game.

Great light, great group, here’s another one for the Aperture Academy history books.