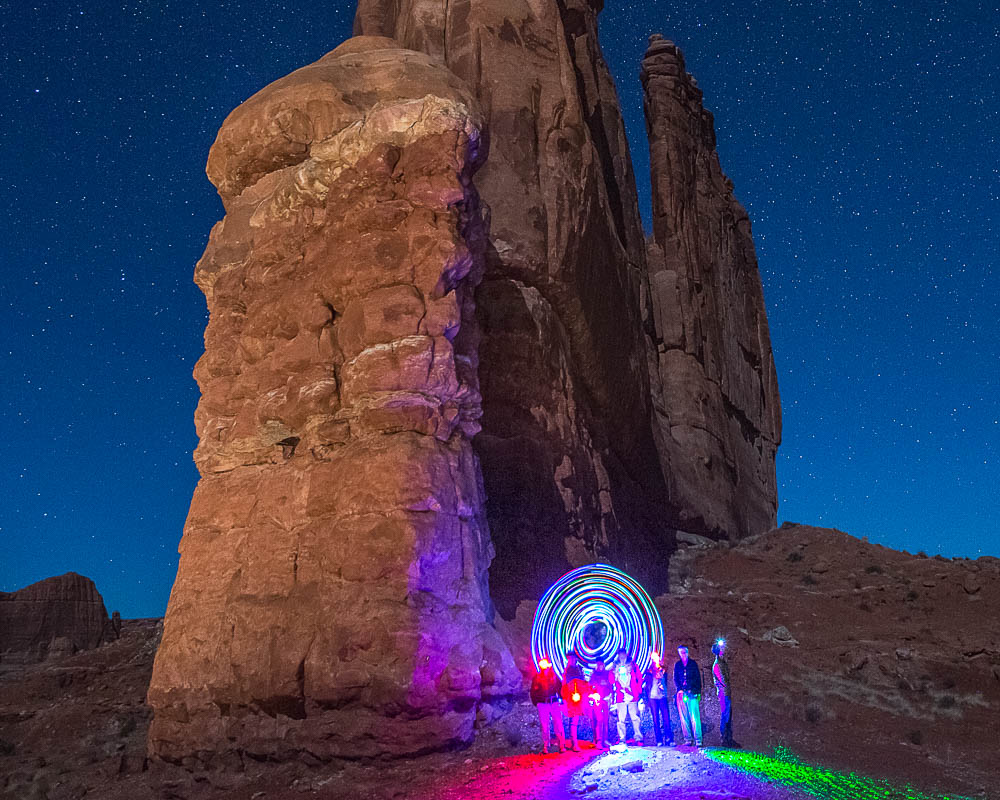 Moab will always have a special place in my heart. Mostly because it is so close to Arches National Park which happens to be one of my favorite parks. The rocks are dyed red from hematite which is a rusty red oxide iron mineral. If the color of the rocks wasn't enough, there are over 2000 sandstone arches within the park, and they happen to make for really great subjects against the dark night skies.

Phil and I met with a bright group of students who were ready to cross over to the dark side at the Holiday Inn. The hotel was conveniently located just a few miles down the road from the park entrance which would make for nice short drives to and from the park. After our orientation we gave the group a little break to get their things together and then it was time to head in for our first shoot.

The first location was Landscape Arch which is an impressive 290 feet long, making it the longest arch in the park and the fifth longest natural arch in the world. After about a mile of hiking we reached our destination and started to set up shop. We had a decent amount of moonlight which made composing the shot a little bit easier. Phil and I helped the students focus their lenses on infinity and then prepared them to shoot pin point stars. After taking a few shots in moonlight we proceeded to light-paint the arch giving it a fantastic orange glow. 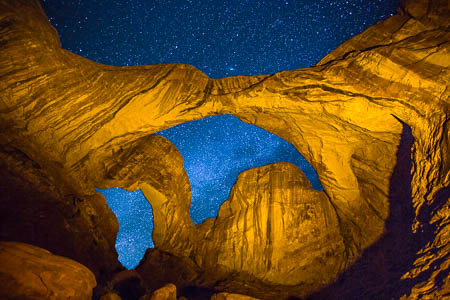 Hiking back to the van was pleasant in the unseasonably warm autumn moonlight. Once everyone gathered up at the van we hopped in and headed over to Skyline Arch to shoot star trails. The group pulled out their intervalometers and programed them after a few test shots. Once the shutters started to roll we took a step back and let the cameras do the dirty work. After about an hour of shooting we packed up and headed to our last shoot of the night.

Double Arch is one of our favorite arches in the park because of it's impressive shape and size. The rock makes for a great window into the night sky which just begs to be photographed, so we did. We got the group settled in and had them shoot pinpoint stars up through the arches. Once everyone was satisfied with their shots we headed down to Moab to indulge in some much deserved sleep.

On the second day of the workshop we headed to balanced rock to photograph sunset with the Lasel Mountain range in the background. Once the sun's display was finished we drove to the Courthouse Towers. The Courthouse Towers are two massive slabs of sandstone that come jetting out of the desert floor reaching high into the arid sky. We decided to shoot a mix of pinpoint stars and few star trails behind the towers as well. 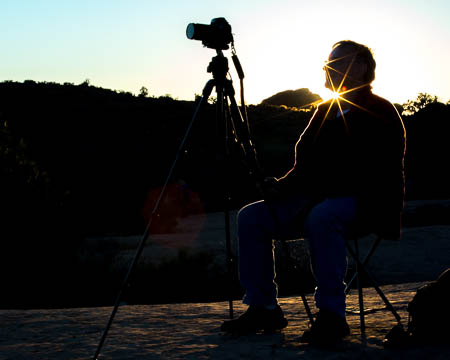 The second stop of the night was Turret Arch which is located in the Windows Section of the park. Turret Arch is an interesting mound of an arch that lends itself to great photographic compositions. Here we photographed the arch with the milkyway stringing across the sky behind it.

Lastly we brought the shoot full circle by heading back to Balanced Rock for a different perspective to cap off the night. Here we shot the milkyway, did a little bit of light painting and even experimented with some funky LED lights. Once again the night had flown by and it was time to hurry back to the hotel to slip in a few Z's so we could be rested up for post production the following day. In post Phil and I taught the students how to stack their photos into one beautiful star trail image. Once everyone got the hang of the process we expanded on the technique teaching them how create comets and slivers. Lastly we showed them how to combine multiple light painted layers to create a polished looking image.

This was yet another workshop for the record books of greatness!

Mike, Phil and the rest of the Aperture Academy Team!