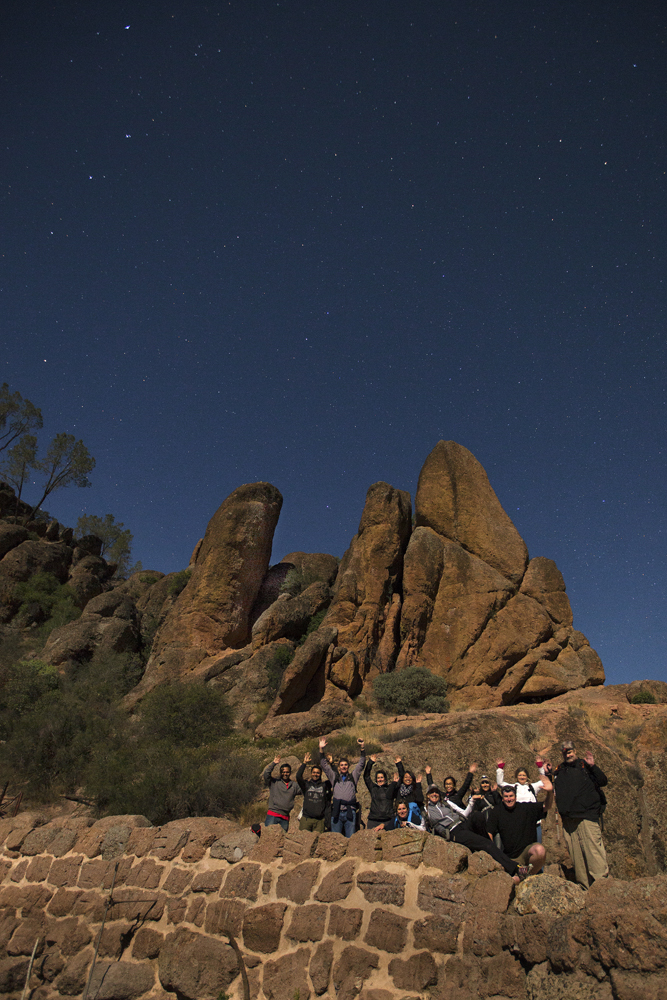 Night Photography is becoming a lot more popular, so at Aperture Academy it's no wonder that our Darkside of Photography Workshop is so in demand. Today's DSLR's are capable of capturing some amazing images, even after the sun has gone down, and the stars start to twinkle.

Stephen and Ellie met up with 10 zealous photographers at ApCad's state of the art Studio in San Jose. After a round of introductions Stephen went over some basics for nighttime shooting and what everyone could expect for the evening.

Ellie was lucky enough to take the students on an inaugural voyage. This was the first time Aperture Academy's second Mercedes Sprinter van had been driven. The first van is Apcab1 so it goes without saying that this was ApCab2. She definitely had that 'new van" smell. It was a smooth ride down to Pinnacles National Park, just south of Hollister.

The group travels south to this beautiful and remote location for it’s dark skies. Just far enough from the light pollution of the San Francisco Bay Area, yet still close enough to drive down for an evening of photography. Upon arriving at the location there is a little hike to get out to the shooting location. The less than 1 mile hike is definitely peaceful and picturesque. Near the end of the trail is a really cool cave system. As the group makes their way out of the cave, there is one final ascent by stone staircase. The payoff is huge as everyone lays eyes on the awesome location for the evening. Ellie gets everyone set up in a nice location to capture the amazing rock formations. Not only are there great rock formations, but they are positioned perfectly with Polaris directly above. This is good news because Polaris, or the North star lies almost exactly above Earth’s northern axis, it’s like the center of a wheel, and does not rise or set. Polaris does move slightly, as it rotates very tightly around the exact point of the north celestial pole everyday. Why is all this important? With many exposures over anywhere from 30 to 45 minutes the movement of all the other stars around polaris create whats known as ‘star trails’. Not only are they star trails, but with the north star in the center, the stars create a lovely circular pattern. Stephen and Ellie would be covering the particulars of post processing star trails on day 2 day of the workshop. 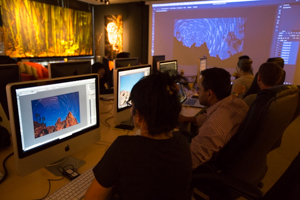 Ellie and Stephen made there way around to all the students making sure everyone had a composition they liked, as well as the proper settings. With night photography there is a fare amount of trail and error. Taking test exposures is key. These test exposures ensure that those star trail photos have the correct exposure, because once the exposures start, they will run for 3 minutes at an interval 1 second, for 45 minutes. It’s a lot like shooting film, you won’t know what you’ve got until you process the next day. Once the intervolometers start running of the exposures it’s time to “talk shop” or simply lay back and enjoy the stars. After a couple sets of long exposures it was getting pretty late. Seemed like a good time to snap a fun night time group shot, and then head back to ApCab2. The arrival back at the Aperture Academy studio was pretty late, and the group would meet up again at 9:30am for day 2. 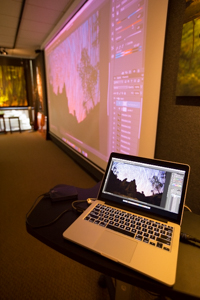 The second day starts with coffee and donuts. Once everyone is caffeinated and sugared up, it’s time to download the images onto the resident iMac computers. Meanwhile Stephen explains the ins and outs of star trail stacking on the big screen. He covers the basics from import, to layers and a step further to editing the layers. Ellie and Stephen enjoyed seeing the students reactions as the layers came together and the awesome star trail shots took shape. All of the students captured some really stunning images. They were all slightly different, which was really neat to see. Stephen went over some advanced editing, and one of his favorite techniques. He adjusts the opacity of each layer, and the result is brilliant, as the stars appear to have motion, kind of like comets. The students picked up on it quickly, so soon all the shots came to life even more, with some fantastic motion. The post processing session was a few hours, but it really flew by. Everyone was a little tired, so some afternoon naps were definitely in order.

Stephen and Ellie thanked everyone for attending, and bid them a fond farewell and happy Sunday.